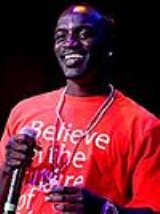 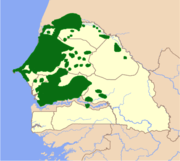 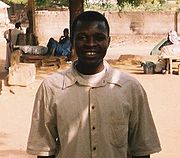 The Wolof are an ethnic group
Ethnic group
An ethnic group is a group of people whose members identify with each other, through a common heritage, often consisting of a common language, a common culture and/or an ideology that stresses common ancestry or endogamy...
found in Senegal
Senegal
Senegal , officially the Republic of Senegal , is a country in western Africa. It owes its name to the Sénégal River that borders it to the east and north...
, The Gambia
The Gambia
The Republic of The Gambia, commonly referred to as The Gambia, or Gambia , is a country in West Africa. Gambia is the smallest country on mainland Africa, surrounded by Senegal except for a short coastline on the Atlantic Ocean in the west....
, and Mauritania
Mauritania
Mauritania is a country in the Maghreb and West Africa. It is bordered by the Atlantic Ocean in the west, by Western Sahara in the north, by Algeria in the northeast, by Mali in the east and southeast, and by Senegal in the southwest...
.

In Senegal, the Wolof form an ethnic plurality with about 43.3% of the population are Wolofs. Note however that, this figure is misleading because other tribes who have been Wolofized and speak the Wolof language are added to this figure when in actual fact they are not Wolofs at all.

In The Gambia, about 16% of the population are Wolof. Here, they are a minority, where the Mandinka
Mandinka people
The Mandinka, Malinke are one of the largest ethnic groups in West Africa with an estimated population of eleven million ....
are the plurality with 42% of the population, yet Wolof language and culture have a disproportionate influence because of their prevalence in Banjul
Banjul
-Transport:Ferries sail from Banjul to Barra. The city is served by the Banjul International Airport. Banjul is on the Trans–West African Coastal Highway connecting it to Dakar and Bissau, and will eventually provide a paved highway link to 11 other nations of ECOWAS.Banjul International Airport...
, The Gambia's capital, where majority of the population are Wolof.

In Mauritania, about 8% of the population are Wolof. They live largely in the southern coastal region of the country.

In older French publications the spelling "Ouolof" is often used instead of "Wolof". In some English publications, predominantly those referring to Gambian Wolof, the spelling "Wollof" is used, because this spelling will induce native English speakers to pronounce the term correctly as a Wolof speaker. In publications of the 19th century and before the spelling "Volof" and "Olof" can also be found. Rarely used are also the spellings "Jolof", "Jollof" and "Dyolof". - The term "Wolof" itself may also refer to the Wolof language
Wolof language
Wolof is a language spoken in Senegal, The Gambia, and Mauritania, and is the native language of the Wolof people. Like the neighbouring languages Serer and Fula, it belongs to the Atlantic branch of the Niger–Congo language family...
or to things originating from Wolof culture or tradition.

It is thought the Wolof people originated from a Baffouri population in the Sahara before it became hostile to farming due to desertification. As the environment deteriorated some of them drifted into the Senegalese areas of Futa Toro and modern-day south eastern Mauritania. With the Arab conquests of around 640 AD they were forced to move into north and east Senegal where over time villages developed into autonomous states such as Baol, Kayor, Saloum, Dimar, Walo and Sine the overall ruling state being that of Jolof who came together voluntarily to form the Jolof Empire.

Legend has it that in Walo the fishermen from several villages argued vehemently over firewood which lay along the edge of a lake at Mengen. Just before matters developed into violence a mysterious person called Ndyadyane Ndyaye (Njanjan Njie) arose from the lake and shared out the firewood fairly among the men and promptly vanished much to their bafflement. The decision was made to try and catch him so they feigned another argument and when he appeared he was caught. When Mansa Wali Jon the ruler of Sine, who was himself endowed with supernatural powers, heard about the strange goings on in Mengen he shouted "Ndyadyane Ndyaye" which is an expression of utter amazement. This name was given to the strange visitor (actual name: Amadu Bubakar Ibn Muhammed). He became the first ruler of the new empire with the title Burba Jolof and other states voluntarily pledged allegiance to him. Thus the new empire arose around 300 AD in the Senegambia valley which stretched from the Gambia River and encompassed most of modern-day Senegal.

The Wolof Empire was a medieval West African state that ruled parts of Senegal and The Gambia from approximately 1350 to 1890. While only ever consolidated into a single state structure for part of this time, the tradition of governance, caste, and culture of the Wolof dominate the history of north-central Senegal for much of the last 800 years. Its final demise at the hands of French colonial forces in the 1870s-1890s also marks the beginning of the formation of Senegal as a unified state.

By the end of the 15th century, the Wolof states of Jolof, Kayor, Baol and Walo had become united in a federation with Jolof as the metropolitan power. The position of king was held by the Burba Wolof and the rulers of the other component states owed loyalty to him while being allowed local sovereignty in internal state matters. Saloum and Sine were later brought within the union. Before they became involved in trading with the Portuguese merchants on the coast, the Wolof people enjoyed the benefits of long established trading and cultural ties with the Western Sudanese empires and had also benefited from trading with Futa Toro and the Berbers from North Africa. Through these early trading links and organisation the Wolof states grew wealthy and had formidable strength.

The Wolof people’s traditional culture and practices have survived the colonial era and are a strong element of the Senegalese culture .

"Wolof" is the name of the native language of the Wolof people Because at least 50% of Senegal's population are native speakers of Wolof, while members of neighboring groups are often bilingual and can understand Wolof. Wolof culture and language have an enormous influence, especially in urban areas. Wolof is strongly linked to Serer and Fulani in structure with minor Arabic influence.

The vast majority of the Wolof people are Sufi Muslims. The Senegalese Sufi Muslim brotherhoods
Muslim brotherhoods of Senegal
This is a list of Muslim groups in Senegal . They are active Muslim organizations that can also be found in many other parts of Africa and the Islamic world.The three largest are:...
, appearing in Wolof communities in the 19th century, grew tremendously in the 20th. Their leaders, or marabouts, exercise a huge cultural and political influence amongst most Muslim communities, most notably the leader of the Mouride
Mouride
The Mouride brotherhood is a large Islamic Sufi order most prominent in Senegal and The Gambia, with headquarters in the holy city of Touba, Senegal...
brotherhood, Serigne Cheikh Maty Leye Mbacké. The Islam of the Wolof is very tolerant and puts an emphasis on meditation and spirituality.

Ceremonies such as weddings, funerals, and baptisms, while not unique, have traditional elements distinctive to the Wolof. Many aspects of these traditional ceremonies have merged and been modified through the 20th century.

Prior to traditional Wolof wedding ceremonies, the parents of the groom-to-be sends elders to the girl's parents with kola nuts and money to ask for her hand in marriage. The girl's parents consult their daughter and either consent to or reject the proposal.. If accepted, the parents of the bride to be distribute the kola nuts among the family and neighbours. This distribution is an informal way of announcing the impending wedding. In more traditional practices, the family of the groom-to-be paid the girl's bride price in the form of money. This tradition, where surviving, has been modernized and dowry
Dowry
A dowry is the money, goods, or estate that a woman brings forth to the marriage. It contrasts with bride price, which is paid to the bride's parents, and dower, which is property settled on the bride herself by the groom at the time of marriage. The same culture may simultaneously practice both...
is paid in money, cars or even houses. After the completion of the groom's obligations, the two families set a wedding day. Before the wedding day, the groom's family gives a party to welcome their daughter-in-law and to prepare her to live with her new family. The imam
Imam
An imam is an Islamic leadership position, often the worship leader of a mosque and the Muslim community. Similar to spiritual leaders, the imam is the one who leads Islamic worship services. More often, the community turns to the mosque imam if they have a religious question...
and elders advise the groom with the presence of some representatives of the bride's parents.

Weddings traditionally take place at the groom's home. Parents receive guests with food and drink (but not alcohol), while guests bring gifts of money, rice, drinks, ships, sugar, or spices. After the ceremony people feast and dance with guests hiring a griot
Griot
A griot or jeli is a West African storyteller. The griot delivers history as a poet, praise singer, and wandering musician. The griot is a repository of oral tradition. As such, they are sometimes also called bards...
(praise-singer) and giving further gifts to the groom's parents.