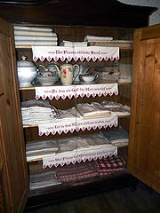 Overview
A dowry is the money
Money
Money is any object or record that is generally accepted as payment for goods and services and repayment of debts in a given country or socio-economic context. The main functions of money are distinguished as: a medium of exchange; a unit of account; a store of value; and, occasionally in the past,...
, goods, or estate
Estate
Estate may refer to:* Estate , a term in common law for a person's property, entitlements and obligations.* Estates of the realm, a broad social category in the histories of certain countries....
that a woman brings forth to the marriage
Marriage
Marriage is a social union or legal contract between people that creates kinship. It is an institution in which interpersonal relationships, usually intimate and sexual, are acknowledged in a variety of ways, depending on the culture or subculture in which it is found...
. It contrasts with bride price
Bride price
Bride price, also known as bride wealth, is an amount of money or property or wealth paid by the groom or his family to the parents of a woman upon the marriage of their daughter to the groom...
, which is paid to the bride's parents, and dower
Dower
Dower or morning gift was a provision accorded by law to a wife for her support in the event that she should survive her husband...
, which is property settled on the bride herself by the groom at the time of marriage. The same culture may simultaneously practice both dowry and bride price. Dowry is an ancient custom, and its existence may well predate records of it.
One function dowry may be to provide the husband with "seed money" or property for the establishment of a new household and to help feed and protect the family.

Can i have the references on the defintions

Is dowry a merit or demerit?
More
x