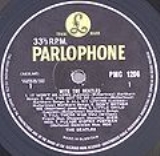 With the Beatles
Topic Home
Discussion
0

Encyclopedia
With The Beatles is the second studio album
Studio album
A studio album is an album made up of tracks recorded in the controlled environment of a recording studio. A studio album contains newly written and recorded or previously unreleased or remixed material, distinguishing itself from a compilation or reissue album of previously recorded material, or...
by the English rock
Rock music
Rock music is a genre of popular music that developed during and after the 1960s, particularly in the United Kingdom and the United States. It has its roots in 1940s and 1950s rock and roll, itself heavily influenced by rhythm and blues and country music...
group The Beatles
The Beatles
The Beatles were an English rock band, active throughout the 1960s and one of the most commercially successful and critically acclaimed acts in the history of popular music. Formed in Liverpool, by 1962 the group consisted of John Lennon , Paul McCartney , George Harrison and Ringo Starr...
. It was released on 22 November 1963 on Parlophone
Parlophone
Parlophone is a record label that was founded in Germany in 1896 by the Carl Lindström Company as Parlophon. The British branch was formed in 1923 as "Parlophone" which developed a reputation in the 1920s as a leading jazz label. It was acquired in 1927 by the Columbia Graphophone Company which...
, and was recorded four months after the band's debut Please Please Me
Please Please Me
Please Please Me is the debut album by the English rock band The Beatles. Parlophone rush-released the album on 22 March 1963 in the United Kingdom to capitalise on the success of singles "Please Please Me" and "Love Me Do" .Of the album's fourteen songs, eight were written by Lennon–McCartney...
. The album features eight original compositions (seven by Lennon–McCartney and "Don't Bother Me
Don't Bother Me
"Don't Bother Me" is the first song written by George Harrison to appear on an album by The Beatles. It originally appeared on the group's With The Beatles album in the United Kingdom, released in 1963, and on their Meet The Beatles! album in the United States, released in 1964.-History:Harrison...
", George Harrison
George Harrison
George Harrison, MBE was an English musician, guitarist, singer-songwriter, actor and film producer who achieved international fame as lead guitarist of The Beatles. Often referred to as "the quiet Beatle", Harrison became over time an admirer of Indian mysticism, and introduced it to the other...
's first recorded solo composition and his first released on a Beatles album) and six covers
Cover version
In popular music, a cover version or cover song, or simply cover, is a new performance or recording of a contemporary or previously recorded, commercially released song or popular song...
(mostly of Motown and R&B
Rhythm and blues
Rhythm and blues, often abbreviated to R&B, is a genre of popular African American music that originated in the 1940s. The term was originally used by record companies to describe recordings marketed predominantly to urban African Americans, at a time when "urbane, rocking, jazz based music with a...
hits). Most of the songs from the album were released in the United States by Capitol Records as the Meet The Beatles!
Meet the Beatles!
-External links:*Bruce Spizer's *Bruce Spizer's *...
LP on 20 January 1964, and the remaining that were not, featured on their next US album, The Beatles' Second Album.

The LP had advance orders of a half million and sold another half million by September 1965, making it the second album to sell a million copies in the UK, after the soundtrack to the 1958 film South Pacific
South Pacific (film)
South Pacific is a 1958 musical romance film adaptation of the Rodgers and Hammerstein musical South Pacific, and based on James A. Michener's Tales of the South Pacific...
. With The Beatles stayed at the top of the charts for 21 weeks, displacing Please Please Me, so that The Beatles occupied the top spot for 51 consecutive weeks. It even reached number 11 in the "singles charts" (because at the time UK charts counted all records sold, regardless of format). EMI Australia did not receive the cover art, and used a caricature of the band in a similar style to the black-and-white photograph on other releases. The Beatles were unaware of this until fans showed them the cover during their only Australian tour, and informed the EMI publicity staff that they were not pleased with the substitution.