The regular show is hosted by Jiminy Cricket
Jiminy Cricket
Jiminy Cricket is the Walt Disney version of "The Talking Cricket" , a fictional character created by Carlo Collodi for his children's book Pinocchio, which was adapted into an animated film by Disney in 1940...
and the Blue Fairy
Blue Fairy
The Fairy With Turquoise Hair is a fictional character in Carlo Collodi's book The Adventures of Pinocchio. She repeatedly appears at critical moments in Pinocchio's wanderings to admonish the little wooden puppet to avoid bad or risky behavior...
, and revolves around the wishes of famous Disney characters - good and bad. The lights on Cinderella Castle
Cinderella Castle
Cinderella Castle is the fairy tale castle at the center of two Disney theme parks: the Magic Kingdom at the Walt Disney World Resort, and Tokyo Disneyland at the Tokyo Disney Resort. Both serve as worldwide recognized icons and the flagship attraction for their respective theme parks.-Inspiration...
change colors throughout the show, reflecting the different stages of Wishes narrative. At times it glows blue, imitating the Blue Fairy, but it is lit in angry reds and oranges for the "Villainous Wishes" sector of the show. There are also a number of special projection effects used on the Castle, such as the face of the Magic Mirror from Snow White and the Seven Dwarfs
Snow White and the Seven Dwarfs (1937 film)
Snow White and the Seven Dwarfs is a 1937 American animated film based on Snow White, a German fairy tale by the Brothers Grimm. It was the first full-length cel-animated feature in motion picture history, as well as the first animated feature film produced in America, the first produced in full...
, and the stars and moon from Mickey's sorcerer hat in Fantasia
Fantasia (film)
Fantasia is a 1940 American animated film produced by Walt Disney and released by Walt Disney Productions. The third feature in the Walt Disney Animated Classics series, the film consists of eight animated segments set to pieces of classical music conducted by Leopold Stokowski, seven of which are...
. While most of the characters in the show are only heard as part of the show's music track, Wishes also features an appearance from Tinker Bell as she flies from the tallest spire of Cinderella Castle (weather permitting). 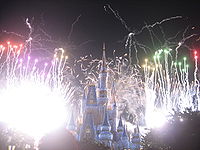 The show begins with the Blue Fairy's narration: "When stars are born, they possess a gift or two. One of them is this: they have the power to make a wish come true." This transitions into the theme song of the show, which is the poem "Starlight, Starbright" set to music. Jiminy Cricket begins his narration about how he didn't used to believe in wishes, but is about to share the things that changed his mind. The show continues with a medley of famous Disney songs overlaid with the voices of Disney characters making wishes. Snow White, Cinderella, Pinocchio, Aladdin, Peter Pan and Ariel are featured, among others. Several primarily instrumental sections follow, representing wishes for adventure, wishes for love and "magical" wishes. Wishes then takes a turn for the slightly sinister when the Disney villains, led by the Evil Queen from Snow White, take over the show. However, in the end, Good triumphs over Evil, and the Blue Fairy returns to host the finale, stating that "we must always believe in our wishes, for they are the magic in the world." The show ends with a mix of the Wishes theme and "When You Wish Upon a Star
When You Wish upon a Star
"When You Wish upon a Star" is a song written by Leigh Harline and Ned Washington for Walt Disney's 1940 adaptation of Pinocchio. The original version of the song was sung by Cliff Edwards in the character of Jiminy Cricket, and is heard over the opening credits and again in the final scene of the...
" from Pinocchio.


Happy HalloWishes: A Grim Grinning Ghost Spooktacular in the Sky

HalloWishes debuted in 2005 and is performed at the separate-admission ("hard ticket") event Mickey's Not-So-Scary Halloween Party at the Magic Kingdom in lieu of the regular Wishes show. Taking its name from the theme song for the classic attraction Haunted Mansion
Haunted Mansion
The Haunted Mansion is a dark ride located at Disneyland, the Magic Kingdom at Walt Disney World and Tokyo Disneyland. A significantly re-imagined incarnation of the ride, known as Phantom Manor, is located in Disneyland Paris...
, the show features fireworks synchronized to classic Disney Villains themes and other Halloween music.


Holiday Wishes: Celebrate The Spirit of the Season

Holiday Wishes: Celebrate the Spirit of the Season replaces Wishes during Mickey's Very Merry Christmas Party
Mickey's Very Merry Christmas Party
Mickey's Very Merry Christmas Party is a hard ticket event hosted at the Magic Kingdom theme park. It runs around mid-November and running until Christmas. The party is held on specific days announced at the Walt Disney World website. The event goes from 7:00 PM to midnight...
, and during the park's regular operating days near Christmas Day (often December 21–31). The show features dazzling fireworks performed to remixed classic Christmas songs
Christmas Songs
Christmas Songs is a 2005 album by Diana Krall performed with the Clayton-Hamilton Jazz Orchestra. This is Krall's first full-length album of Christmas songs , and her first studio album with a big band. It is her ninth album overall...
(including "Spirit of the Season
Spirit of the Season
Spirit of the Season is a song from the movie The Polar Express. A cover of the song by the Mormon Tabernacle Choir and Sissel was nominated for 2 Grammys, Best Classical Crossover Album and Best Engineered Album - Classical....
") and an appearance by Tinker Bell. For the show's finale, the music and fireworks stop temporarily and machines on the roof of Main Street, U.S.A.
Main Street, U.S.A.
Main Street, U.S.A. is the first "themed land" inside the main entrance of the many 'Magic Kingdom'-style parks run by The Walt Disney Company around the world....
create artificial snow, creating an emotional climax similar to the Believe... In Holiday Magic
Believe... In Holiday Magic
Believe... In Holiday Magic is a holiday fireworks show at the Disneyland Resort in Anaheim, California. The show runs for much of the Disneyland Resort's holiday season, which typically runs from the third weekend of November to the first weekend of the following January.-History:In 2000,...
holiday show at Disneyland. Its soundtrack is available on CD
Compact Disc
The Compact Disc is an optical disc used to store digital data. It was originally developed to store and playback sound recordings exclusively, but later expanded to encompass data storage , write-once audio and data storage , rewritable media , Video Compact Discs , Super Video Compact Discs ,...
.

In 2010, Walt Disney World replaced Wishes with another fireworks show during a summer entertainment package called "Summer Nightastic!". Disney announced that this would be the Magic, Music, and Mayhem show from Disney's Pirate and Princess Party.

Disneyland Park
Disneyland Park (Paris)
Disneyland Park is a theme park at Disneyland Paris, a resort complex just outside of Paris, in the new town of Marne-la-Vallée, France. The first of two parks built at the resort, it opened as Euro Disneyland on 12 April, 1992...
introduced a "nighttime spectacular" based on the Magic Kingdom's Wishes pyrotechnics show. The show ran its first year from July 16, 2005 to August 28, 2005, with performances every night at 11:15 p.m. The show ran every summer season from 2005 until 2007 and was replaced in 2008 by The Enchanted Fireworks.

Despite featuring fewer fireworks and a smaller budget, the Parisian version of Wishes contained special effects not seen before in the park. In addition to projections of Disney characters to help relay the story of the show to the multilingual audience, green and blue laser arrangements (projected onto and from the Castle) differentiated it from previous fireworks shows in the park. A scene involving Hercules
Hercules
Hercules is the Roman name for Greek demigod Heracles, son of Zeus , and the mortal Alcmene...
and Disney Princesses
Disney Princesses
Disney Princess is a Walt Disney Company franchise, based on fictional characters who have been featured as part of the Disney character line-up. The six original members of the franchise were Snow White, Cinderella, Aurora, Ariel, Belle and Jasmine, who were later joined by Pocahontas, Mulan,...
was cut from this version. The show's narration was altered as well, with some sections of Jiminy Cricket's English-language narration cut and replaced by the Blue Fairy, who now co-narrates the show in French.