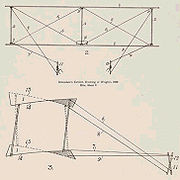 Wing warping was an early system for lateral (roll) control of a fixed-wing aircraft. The technique, used and patented by the Wright brothers
Wright brothers
The Wright brothers, Orville and Wilbur , were two Americans credited with inventing and building the world's first successful airplane and making the first controlled, powered and sustained heavier-than-air human flight, on December 17, 1903...
, consisted of a system of pulleys and cables to twist the trailing edges of the wings in opposite directions. In many respects, this approach is similar to that used to trim the performance of a paper airplane by curling the paper at the back of its wings.

In practice, since most wing warping designs involved flexing of structural members they were difficult to control and liable to cause structural failure. Aileron
Aileron
Ailerons are hinged flight control surfaces attached to the trailing edge of the wing of a fixed-wing aircraft. The ailerons are used to control the aircraft in roll, which results in a change in heading due to the tilting of the lift vector...
s had begun to replace wing warping as the most common means of achieving lateral control as early as 1911, especially in biplane
Biplane
A biplane is a fixed-wing aircraft with two superimposed main wings. The Wright brothers' Wright Flyer used a biplane design, as did most aircraft in the early years of aviation. While a biplane wing structure has a structural advantage, it produces more drag than a similar monoplane wing...
designs. Monoplane
Monoplane
A monoplane is a fixed-wing aircraft with one main set of wing surfaces, in contrast to a biplane or triplane. Since the late 1930s it has been the most common form for a fixed wing aircraft.-Types of monoplane:...
wings of the period were much more flexible, and proved more amenable to wing warping - but even for monoplane designs, ailerons became the norm after 1915.

Lateral (roll) control in early aircraft was problematic at best. An overly flexible, involuntarily twisting wing can cause involuntary rolling, but even worse, it can convert attempts at correction, either from wing warping or ailerons, into a counteracting "tab" effect. Once this was fully understood wing structures were made progressively more rigid, precluding wing warping altogether - and aircraft became far more controllable in the lateral plane.

Wing warping was a common feature of early aircraft, including: