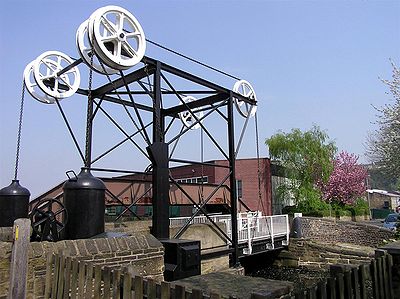 The windlass is an apparatus for moving heavy weights. Typically, a windlass consists of a horizontal cylinder (barrel), which is rotated by the turn of a crank or belt. A winch
Winch
A winch is a mechanical device that is used to pull in or let out or otherwise adjust the "tension" of a rope or wire rope . In its simplest form it consists of a spool and attached hand crank. In larger forms, winches stand at the heart of machines as diverse as tow trucks, steam shovels and...
is affixed to one or both ends, and a cable or rope is wound around the winch, pulling a weight attached to the opposite end.

Windlasses are sometimes used on boats to raise the anchor
Anchor
An anchor is a device, normally made of metal, that is used to connect a vessel to the bed of a body of water to prevent the vessel from drifting due to wind or current. The word derives from Latin ancora, which itself comes from the Greek ἄγκυρα .Anchors can either be temporary or permanent...
as an alternative to a vertical capstan
Capstan (nautical)
A capstan is a vertical-axled rotating machine developed for use on sailing ships to apply force to ropes, cables, and hawsers. The principle is similar to that of the windlass, which has a horizontal axle.- History :...
(see anchor windlass
Anchor windlass
A "windlass" is a machine used on ships that is used to let-out and heave-up equipment such as for example a ship's anchor or a fishing trawl.An anchor windlass is a machine that restrains and manipulates the anchor chain and/or rope on a boat, allowing the anchor to be raised and lowered. A...
).

The rod or stick used to tighten a tourniquet is called a windlass.

The handle used to open locks
Lock (water transport)
A lock is a device for raising and lowering boats between stretches of water of different levels on river and canal waterways. The distinguishing feature of a lock is a fixed chamber in which the water level can be varied; whereas in a caisson lock, a boat lift, or on a canal inclined plane, it is...
on the UK's inland waterways is called a windlass.

In a differential windlass, also called a Chinese windlass, there are two coaxial drums of different radii r and r. The rope is wound onto one drum while it unwinds from the other, with a movable pulley hanging in the bight
Bight (knot)
In knot tying, a bight is a curved section, slack part, or loop between the two ends of a rope, string, or yarn. The term is also used in a more specific way when describing Turk's head knots, indicating how many repetitions of braiding are made in the circuit of a given knot.-Slipped knot:In order...
between the drums. Since each turn of the crank raises the pulley and attached weight by only