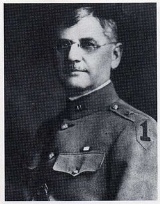 Encyclopedia
Major General William Sidney Graves (27 March 1865 — 27 February 1940). The commander of American forces in Siberia
Siberia
Siberia is an extensive region constituting almost all of Northern Asia. Comprising the central and eastern portion of the Russian Federation, it was part of the Soviet Union from its beginning, as its predecessor states, the Tsardom of Russia and the Russian Empire, conquered it during the 16th...
during the Allied Intervention in Russia.

Graves married Katherine Pauline "Kate" Boyd, daughter of William Lang and Augusta Josephine (née Merriam) Boyd, at St. Mark's Episcopal Church in Cheyenne, Wyoming
Cheyenne, Wyoming
Cheyenne is the capital and most populous city of the U.S. state of Wyoming and the county seat of Laramie County. It is the principal city of the Cheyenne, Wyoming, Metropolitan Statistical Area which encompasses all of Laramie County. The population is 59,466 at the 2010 census. Cheyenne is the...
, on 9 February 1891. Katherine was the niece of his commanding officer, Henry C. Merriam
Henry C. Merriam
Henry Clay Merriam was a United States Army general. He received the United States military's highest decoration, the Medal of Honor, for his actions as a Union officer in command of African American troops during the American Civil War...
.

He served in the Spanish-American War
Spanish-American War
The Spanish–American War was a conflict in 1898 between Spain and the United States, effectively the result of American intervention in the ongoing Cuban War of Independence...
in the Philippines
Philippines
The Philippines , officially known as the Republic of the Philippines , is a country in Southeast Asia in the western Pacific Ocean. To its north across the Luzon Strait lies Taiwan. West across the South China Sea sits Vietnam...
until 1902. He fought at the Battle of Caloocan
Battle of Caloocan
This Battle of Caloocan was a battle fought in the early stages of the Philippine-American War.-Background:After the Battle of Manila on 4–5 February 1899, Filipino forces which had been pushed out of a strong position on the Santa Mesa ridge north of the City regrouped at Caloocan about 12...
as a company commander during the insurrection.

In 1918 he was given command of the 8th Infantry Division and sent to Siberia under direct orders from President Woodrow Wilson
Woodrow Wilson
Thomas Woodrow Wilson was the 28th President of the United States, from 1913 to 1921. A leader of the Progressive Movement, he served as President of Princeton University from 1902 to 1910, and then as the Governor of New Jersey from 1911 to 1913...
. He landed on September 1, 1918. His orders were to remain strictly apolitical amidst a politically turbulent situation, as a result, he found himself constantly at odds with his Allied peers, the State Department, and various Russian groups.

Given some 8,000 soldiers in what was called the American Expeditionary Forces (A.E.F.), he settled on the idea of making sure the Trans-Siberian railroad stayed operational and brought in a number of railroad experts to run the railway. His troops did not intervene in the Russian Civil War
Russian Civil War
The Russian Civil War was a multi-party war that occurred within the former Russian Empire after the Russian provisional government collapsed to the Soviets, under the domination of the Bolshevik party. Soviet forces first assumed power in Petrograd The Russian Civil War (1917–1923) was a...
despite strong pressure brought on him to help the White army of Admiral Kolchak. Early on, Graves developed a strong distaste for Kolchak and his government.

Graves thought that the British
United Kingdom
The United Kingdom of Great Britain and Northern IrelandIn the United Kingdom and Dependencies, other languages have been officially recognised as legitimate autochthonous languages under the European Charter for Regional or Minority Languages...
, French
France
The French Republic , The French Republic , The French Republic , (commonly known as France , is a unitary semi-presidential republic in Western Europe with several overseas territories and islands located on other continents and in the Indian, Pacific, and Atlantic oceans. Metropolitan France...
, and Japan
Japan
Japan is an island nation in East Asia. Located in the Pacific Ocean, it lies to the east of the Sea of Japan, China, North Korea, South Korea and Russia, stretching from the Sea of Okhotsk in the north to the East China Sea and Taiwan in the south...
ese forces in Siberia were all following self-serving political ambitions beyond the stated goals of the Allies, which were to protect supplies provided by the powers to their erstwhile Tsarist allies and to provide for the safe conduct of foreign allied troops, primarily Czechs, who were to exit Russia
Russia
Russia or , officially known as both Russia and the Russian Federation , is a country in northern Eurasia. It is a federal semi-presidential republic, comprising 83 federal subjects...
via Vladivostok
Vladivostok
The city is located in the southern extremity of Muravyov-Amursky Peninsula, which is about 30 km long and approximately 12 km wide.The highest point is Mount Kholodilnik, the height of which is 257 m...
. Graves believed, correctly, that the British and French were trying to suppress Bolshevik
Bolshevik
The Bolsheviks, originally also Bolshevists , derived from bol'shinstvo, "majority") were a faction of the Marxist Russian Social Democratic Labour Party which split apart from the Menshevik faction at the Second Party Congress in 1903....
forces (thought by some to be the result of German
Germany
Germany , officially the Federal Republic of Germany , is a federal parliamentary republic in Europe. The country consists of 16 states while the capital and largest city is Berlin. Germany covers an area of 357,021 km2 and has a largely temperate seasonal climate...
provocateurs). He also believed (again correctly) that the Japanese had plans to annex parts of Eastern Siberia (the Amur region, east of Lake Baikal). The Japanese deployed an estimated 72,000 soldiers—some 6 times the authorized troop level of 12,000 set by the Allies.

U.S. forces operated the Trans-Siberian railroad for almost two years, while bandits roamed the Siberian countryside and the political situation turned chaotic. The U.S. military did accomplish its main objective and the entire Czech Legion was evacuated out of Russia via Vladivostok. The last U.S. soldiers left Siberia April 1, 1920.

General Graves was promoted to the rank of major general on 11 July 1925, and retired from the army in 1928 and then wrote a book about his time in Siberia.

William and Kate would have four children, "infant Graves" (who died as a newborn on October 27, 1891, and is buried at Fort Logan National Cemetery
Fort Logan National Cemetery
Fort Logan National Cemetery is a National cemetery in Denver, Colorado, U.S.A. Fort Logan was named after Union General John A. Logan, commander of US Volunteer forces during the American Civil War...
in Denver, Colorado-), Marjorie (19 November 1892-24 February 1894; also buried at Ft. Logan NC.), Sidney Carroll (1893–1974, USMA 1915) and Dorothy (Mrs. William R. Orton). Major Sidney C. Graves would receive a Distinguished Service Cross (DSC) in World War I, and then a second DSC in the Russia campaign, and in 1921 married Olga Roosevelt (Bayne), a direct relative of President Theodore Roosevelt
Theodore Roosevelt
Theodore "Teddy" Roosevelt was the 26th President of the United States . He is noted for his exuberant personality, range of interests and achievements, and his leadership of the Progressive Movement, as well as his "cowboy" persona and robust masculinity...
, both descendants of Cornelius van Schaick Roosevelt (her grandfather, Robert Barnwell Roosevelt, and the president's father, Theodore Roosevelt, Sr., were brothers).