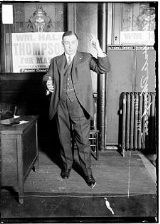 Encyclopedia
William Hale Thompson was Mayor of Chicago
Mayor of Chicago
The Mayor of Chicago is the chief executive of Chicago, Illinois, the third largest city in the United States. He or she is charged with directing city departments and agencies, and with the advice and consent of the Chicago City Council, appoints department and agency leaders.-Appointment...
from 1915 to 1923 and again from 1927 to 1931. Known as "Big Bill", Thompson was the last Republican to serve as Mayor of Chicago
Chicago
Chicago is the largest city in the US state of Illinois. With nearly 2.7 million residents, it is the most populous city in the Midwestern United States and the third most populous in the US, after New York City and Los Angeles...
, and ranks among the most unethical mayors in American history.

Thompson was born in Boston
Boston
Boston is the capital of and largest city in Massachusetts, and is one of the oldest cities in the United States. The largest city in New England, Boston is regarded as the unofficial "Capital of New England" for its economic and cultural impact on the entire New England region. The city proper had...
, Massachusetts
Massachusetts
The Commonwealth of Massachusetts is a state in the New England region of the northeastern United States of America. It is bordered by Rhode Island and Connecticut to the south, New York to the west, and Vermont and New Hampshire to the north; at its east lies the Atlantic Ocean. As of the 2010...
to William Hale and Mary Ann Thompson, but his family moved to Chicago when he was only nine days old. Instead of college, he travelled in Europe
Europe
Europe is, by convention, one of the world's seven continents. Comprising the westernmost peninsula of Eurasia, Europe is generally 'divided' from Asia to its east by the watershed divides of the Ural and Caucasus Mountains, the Ural River, the Caspian and Black Seas, and the waterways connecting...
and then took up ranching in Texas
Texas
Texas is the second largest U.S. state by both area and population, and the largest state by area in the contiguous United States.The name, based on the Caddo word "Tejas" meaning "friends" or "allies", was applied by the Spanish to the Caddo themselves and to the region of their settlement in...
and New Mexico
New Mexico
New Mexico is a state located in the southwest and western regions of the United States. New Mexico is also usually considered one of the Mountain States. With a population density of 16 per square mile, New Mexico is the sixth-most sparsely inhabited U.S...
, returning to Chicago in 1892 after his father's death.

Thompson began his political career in 1900, when he ran for and narrowly won a position as alderman of the 2nd Ward.

Early in his mayoral career, Thompson began to amass a war chest to support an eventual run for the Presidency by charging city drivers and inspectors $3 per month. He was mayor during the Chicago Race Riot of 1919
Chicago Race Riot of 1919
The Chicago Race Riot of 1919 was a major racial conflict that began in Chicago, Illinois on July 27, 1919 and ended on August 3. During the riot, dozens died and hundreds were injured. It is considered the worst of the approximately 25 riots during the Red Summer of 1919, so named because of the...
and was said to have control of the 75,000 African-American voters in his day. Always a flamboyant campaigner, during the 1927 election, Thompson held a debate between himself and two live rat
Rat
Rats are various medium-sized, long-tailed rodents of the superfamily Muroidea. "True rats" are members of the genus Rattus, the most important of which to humans are the black rat, Rattus rattus, and the brown rat, Rattus norvegicus...
s which he used to portray his opponents. While out of office in 1924, Thompson organized a "scientific" expedition to search for tree-climbing fish in the South Seas (actually just a crude attempt to keep his name in the public eye—the expedition never got farther than New Orleans).

In 1927, Al Capone
Al Capone
Alphonse Gabriel "Al" Capone was an American gangster who led a Prohibition-era crime syndicate. The Chicago Outfit, which subsequently became known as the "Capones", was dedicated to smuggling and bootlegging liquor, and other illegal activities such as prostitution, in Chicago from the early...
's support allowed Thompson to return to the mayor's office. Pledging to clean up Chicago and remove the crooks, Thompson instead turned his attention to the reformers, whom he considered the real criminals. According to Thompson, at this time the biggest enemy the United States had was King George V
George V of the United Kingdom
George V was King of the United Kingdom and the British Dominions, and Emperor of India, from 6 May 1910 through the First World War until his death in 1936....
of the United Kingdom
United Kingdom
The United Kingdom of Great Britain and Northern IrelandIn the United Kingdom and Dependencies, other languages have been officially recognised as legitimate autochthonous languages under the European Charter for Regional or Minority Languages...
. Thompson promised his supporters that if they ever met, Thompson would punch the king in the nose. During this final term in office, the "Pineapple Primary
Pineapple Primary
The Pineapple Primary was the name given to a Republican primary election held in Chicago on April 10, 1928; more than 60 bombs were thrown during the campaign and at least two politicians were killed...
" occurred (April 10, 1928), so-called because of the hand grenades used to disrupt voters. The St. Valentine's Day Massacre
St. Valentine's Day massacre
The Saint Valentine's Day massacre is the name given to the 1929 murder of 7 mob associates as part of a prohibition era conflict between two powerful criminal gangs in Chicago: the South Side Italian gang led by Al Capone and the North Side Irish gang led by Bugs Moran. Former members of the...
also took place while Thompson was mayor. Thompson blamed Ruth Hanna McCormick
Ruth Hanna McCormick
Ruth Hanna, Ruth Hanna McCormick or Ruth Hanna McCormick Simms was a United States Representative from Illinois.-Life:Ruth Hanna McCormick Simms was the daughter of Mark Hanna and the wife of Sen...
's lack of support for his loss at the 1928 Republican National Convention
1928 Republican National Convention
The 1928 National Convention of the Republican Party of the United States was held at Convention Hall in Kansas City, Missouri, from June 12 to June 15, 1928....
, and he returned the favor during her 1930 campaign for the United States Senate
United States Senate
The United States Senate is the upper house of the bicameral legislature of the United States, and together with the United States House of Representatives comprises the United States Congress. The composition and powers of the Senate are established in Article One of the U.S. Constitution. Each...
. Thompson had had a longstanding rivalry with the McCormicks. He intensely disliked Robert Rutherford McCormick who published the Chicago Tribune
Chicago Tribune
The Chicago Tribune is a major daily newspaper based in Chicago, Illinois, and the flagship publication of the Tribune Company. Formerly self-styled as the "World's Greatest Newspaper" , it remains the most read daily newspaper of the Chicago metropolitan area and the Great Lakes region and is...
. U.S. Senator Joseph Medill McCormick, was the publisher's brother., and after his death, his widow ran against Thompson for the vacant seat.

Amid growing discontent with Thompson's leadership, particularly in the area of cleaning up Chicago's reputation as the capital of organized crime
Organized crime in Chicago
The following is a timeline of Organized Crime in Chicago.-1910s:*1910 - Chicago police arrest over 200 known Italian gangsters and known Black Hand members in a raid in Little Italy...
, he was defeated in 1931 by Democrat Anton Cermak
Anton Cermak
Anton Joseph Cermak was the mayor of Chicago, Illinois, from 1931 until his assassination by Giuseppe Zangara in 1933.-Early life and career:...
. Cermak was an immigrant from Bohemia
Bohemia
Bohemia is a historical region in central Europe, occupying the western two-thirds of the traditional Czech Lands. It is located in the contemporary Czech Republic with its capital in Prague...
, and Thompson used this fact to belittle him with ethnic slurs such as:

I won't take a back seat to that Bohunk, Chairmock, Chermack or whatever his name is.
Tony, Tony, where's your pushcart at?
Can you picture a World's Fair
Century of Progress
A Century of Progress International Exposition was the name of a World's Fair held in Chicago from 1933 to 1934 to celebrate the city's centennial. The theme of the fair was technological innovation...
mayor?
With a name like that?

Cermak replied to these with, "He doesn't like my name....It's true I didn't come over on the Mayflower
Mayflower
The Mayflower was the ship that transported the English Separatists, better known as the Pilgrims, from a site near the Mayflower Steps in Plymouth, England, to Plymouth, Massachusetts, , in 1620...
, but I came over as soon as I could," which was a sentiment to which ethnic Chicagoans could relate and Thompson's slurs largely backfired.

For Chicago Thompson has meant filth, corruption, obscenity, idiocy and bankruptcy.... He has given the city an international reputation for moronic buffoonery, barbaric crime, triumphant hoodlumism, unchecked graft, and a dejected citizenship. He nearly ruined the property and completely destroyed the pride of the city. He made Chicago a byword for the collapse of American civilization. In his attempt to continue this he excelled himself as a liar and defamer of character.