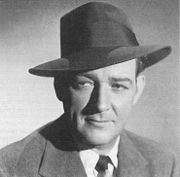 He was an American motion picture
Film
A film, also called a movie or motion picture, is a series of still or moving images. It is produced by recording photographic images with cameras, or by creating images using animation techniques or visual effects...
, television
Television
Television is a telecommunication medium for transmitting and receiving moving images that can be monochrome or colored, with accompanying sound...
and radio
Radio
Radio is the transmission of signals through free space by modulation of electromagnetic waves with frequencies below those of visible light. Electromagnetic radiation travels by means of oscillating electromagnetic fields that pass through the air and the vacuum of space...
actor. Gargan played character roles in many Hollywood productions, including two appearances as detective Ellery Queen
Ellery Queen
Ellery Queen is both a fictional character and a pseudonym used by two American cousins from Brooklyn, New York: Daniel Nathan, alias Frederic Dannay and Manford Lepofsky, alias Manfred Bennington Lee , to write, edit, and anthologize detective fiction.The fictional Ellery Queen created by...
, but was best known for his role as Detective Martin Kane in the 1949-51 radio-television series, Martin Kane, Private Eye
Martin Kane, Private Eye
Martin Kane, Private Eye was an early radio series and television crime series sponsored by United States Tobacco Company.- Radio:Martin Kane, Private Eye began as a 1949-52 radio series starring William Gargan in the title rôle as New York City private detective Martin Kane...
, sponsored by U.S. Tobacco. He also appeared as a private detective in the NBC
NBC
The National Broadcasting Company is an American commercial broadcasting television network and former radio network headquartered in the GE Building in New York City's Rockefeller Center with additional major offices near Los Angeles and in Chicago...
radio show Barrie Craig, Confidential Investigator
Barrie Craig, Confidential Investigator
Barrie Craig, Confidential Investigator was a radio detective drama heard on NBC from October 3, 1951 to June 30, 1955.Detective Barrie Craig worked alone from his Madison Avenue office. Unlike his contemporaries Sam Spade and Philip Marlowe, Craig had a laid-back personality, somewhat cutting...
, which ran from 1951 to 1955.

On leaving school, Gargan became a salesman of bootleg
Rum-running
Rum-running, also known as bootlegging, is the illegal business of transporting alcoholic beverages where such transportation is forbidden by law...
whiskey to New York
New York
New York is a state in the Northeastern region of the United States. It is the nation's third most populous state. New York is bordered by New Jersey and Pennsylvania to the south, and by Connecticut, Massachusetts and Vermont to the east...
speakeasies and then joined a detective agency. While visiting his brother on a musical comedy stage, he was offered a stage job which he accepted. He began his stage career in Aloma of the South Seas and later his film career in Misleading Lady
Misleading Lady
Misleading Lady is a 1932 film directed by Stuart Walker, and starring Claudette Colbert and Edmund Lowe.Paramount closed its studio in Astoria, Queens upon the completion of this film on 1 March 1932.-Plot:...
.

He was cast in a number of stereotypical Irish
Irish people
The Irish people are an ethnic group who originate in Ireland, an island in northwestern Europe. Ireland has been populated for around 9,000 years , with the Irish people's earliest ancestors recorded having legends of being descended from groups such as the Nemedians, Fomorians, Fir Bolg, Tuatha...
parts in films playing policemen, priests, reporters, and blustering adventurers.

Gargan's career came to an end in 1958 when he developed throat cancer, and doctors were forced to remove his larynx. Speaking through an artificial voice box, Gargan became an activist and spokesman for the American Cancer Society
American Cancer Society
The American Cancer Society is the "nationwide community-based voluntary health organization" dedicated, in their own words, "to eliminating cancer as a major health problem by preventing cancer, saving lives, and diminishing suffering from cancer, through research, education, advocacy, and...
, often warning about the dangers of smoking.