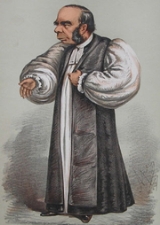 He was born in Cork
Cork (city)
Cork is the second largest city in the Republic of Ireland and the island of Ireland's third most populous city. It is the principal city and administrative centre of County Cork and the largest city in the province of Munster. Cork has a population of 119,418, while the addition of the suburban...
, Ireland. His father was curate
Curate
A curate is a person who is invested with the care or cure of souls of a parish. In this sense "curate" correctly means a parish priest but in English-speaking countries a curate is an assistant to the parish priest...
of the parish attached to the Anglican
Church of Ireland
The Church of Ireland is an autonomous province of the Anglican Communion. The church operates in all parts of Ireland and is the second largest religious body on the island after the Roman Catholic Church...
cathedral in Cork; his grandfather was Archbishop of Dublin
Archbishop of Dublin (Church of Ireland)
The Archbishop of Dublin is the title of the senior cleric who presides over the United Dioceses of Dublin and Glendalough in the Church of Ireland...
. Young Magee entered Trinity College, Dublin
Trinity College, Dublin
Trinity College, Dublin , formally known as the College of the Holy and Undivided Trinity of Queen Elizabeth near Dublin, was founded in 1592 by letters patent from Queen Elizabeth I as the "mother of a university", Extracts from Letters Patent of Elizabeth I, 1592: "...we...found and...
with a scholarship at thirteen. He was ordained to the curacy of St Thomas's, Dublin, but, being threatened with tuberculosis
Tuberculosis
Tuberculosis, MTB, or TB is a common, and in many cases lethal, infectious disease caused by various strains of mycobacteria, usually Mycobacterium tuberculosis. Tuberculosis usually attacks the lungs but can also affect other parts of the body...
, went after two years to Málaga
Málaga
Málaga is a city and a municipality in the Autonomous Community of Andalusia, Spain. With a population of 568,507 in 2010, it is the second most populous city of Andalusia and the sixth largest in Spain. This is the southernmost large city in Europe...
, Spain. On his return he took a curacy at Bath, England and was soon appointed to the Octagon Chapel
Octagon Chapel, Bath
The Octagon Chapel in Milsom Street, Bath, Somerset, England was built in 1767 and has been designated as a Grade I listed building.- History :...
, where his fame both as preacher and platform speaker continued to spread. Some years afterwards he was made prebendary of Wells Cathedral
Wells Cathedral
Wells Cathedral is a Church of England cathedral in Wells, Somerset, England. It is the seat of the Bishop of Bath and Wells, who lives at the adjacent Bishop's Palace....
. In 1860, poor health caused him to accept the living of Enniskillen
Enniskillen
Enniskillen is a town in County Fermanagh, Northern Ireland. It is located almost exactly in the centre of the county between the Upper and Lower sections of Lough Erne. It had a population of 13,599 in the 2001 Census...
, Ireland. In 1864 he was made Dean of Cork and chaplain to the Lord Lieutenant. Here he showed those great gifts which ultimately raised him to high office; a powerful grasp of mental, moral and political problems, combined with eloquence of a high order, illuminated with brilliant flashes of wit.

In 1868 the question of the disestablishment of the Irish Church
Irish Church
Irish Church may refer to:*the Anglican Church of Ireland*the Roman Catholic Church in IrelandSee also Christianity in Ireland for general history and overview of Christianity in Ireland....
came to the fore, and Magee threw himself into its defence with his usual energy and vivacity. The success of his orations caused Prime Minister Benjamin Disraeli to offer him the bishopric of Peterborough
Peterborough
Peterborough is a cathedral city and unitary authority area in the East of England, with an estimated population of in June 2007. For ceremonial purposes it is in the county of Cambridgeshire. Situated north of London, the city stands on the River Nene which flows into the North Sea...
, England. He justified his appointment by his magnificent speech when the Disestablishment Bill reached the House of Lords
House of Lords
The House of Lords is the upper house of the Parliament of the United Kingdom. Like the House of Commons, it meets in the Palace of Westminster....
in 1869, and then plunged into diocesan and general work in England. He preached three remarkable sermons on Christian Evidence in Norwich Cathedral
Norwich Cathedral
Norwich Cathedral is a cathedral located in Norwich, Norfolk, dedicated to the Holy and Undivided Trinity. Formerly a Catholic church, it has belonged to the Church of England since the English Reformation....
in 1871. He took up the temperance
Temperance movement
A temperance movement is a social movement urging reduced use of alcoholic beverages. Temperance movements may criticize excessive alcohol use, promote complete abstinence , or pressure the government to enact anti-alcohol legislation or complete prohibition of alcohol.-Temperance movement by...
question, and declared in the House of Lords that he would rather see "England free than England compulsorily sober," a statement which was misquoted and attacked.

Initially higly critical of the calling of the second Lambeth Conference (1878) he was won over by the experience, writing in his biography that, 'I feel I have learned much from the Pananglican and I see, too, that it is really an institution which will root itself and will ... exercise a powerful influence in the furture of the Anglican Communion. That is a great deal so say on the part of one who greatly disliked and dreaded the affair from the first'.

He was also a supporter of the movement for abolishing the recitation of the Athanasian Creed
Athanasian Creed
The Athanasian Creed is a Christian statement of belief, focusing on Trinitarian doctrine and Christology. The Latin name of the creed, Quicumque vult, is taken from the opening words, "Whosoever wishes." The Athanasian Creed has been used by Christian churches since the sixth century...
in the public services of the Church of England, believing, as he said, that the "presence" of the damnatory clauses, "as they stand and where they stand, is a real peril to the Church and to Christianity itself," and that those clauses "are no essential part" of the creed. The project was laid aside because of the hostility of a large body of the clergy, reinforced by the threat of Edward Pusey and Canon Liddon
Henry Parry Liddon
Henry Parry Liddon was an English theologian.- Biography :The son of a naval captain, he was born at North Stoneham, near Eastleigh, Hampshire. He was educated at King's College School, and at Christ Church, Oxford, where he graduated, taking a second class, in 1850...
to abandon their offices if it were carried. He was not elevated to the see of York until his energies were exhausted, and died about four months after his appointment.

Magee had taken a prominent part in the Ritual controversy, opposing what he conceived to be romanising excess in ritual, as well as the endeavour of the opposite party to "put down Ritualism," as Disraeli expressed it, by the operation of the civil law. His incisive way of putting things earned for him the title of the "Militant Bishop," but his efforts were ever for peace. Magee's manifold activities, his capability as an administrator, his sound judgment, and his remarkable, insight into the ecclesiastical problems of his time, rank him among the most distinguished of English prelates.
The source of this article is wikipedia, the free encyclopedia.  The text of this article is licensed under the GFDL.