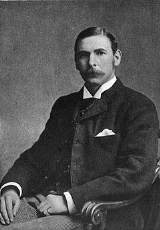 Encyclopedia
Sir William Henry Mahoney Christie FRS  (1 October 1845 – 22 January 1922) was a British astronomer
Astronomer
An astronomer is a scientist who studies celestial bodies such as planets, stars and galaxies.Historically, astronomy was more concerned with the classification and description of phenomena in the sky, while astrophysics attempted to explain these phenomena and the differences between them using...
.

He was born in Woolwich, London, the son of Samuel Hunter Christie
Samuel Hunter Christie
Samuel Hunter Christie was a British scientist and mathematician.He studied mathematics at Trinity College, Cambridge where he was second wrangler. He was particularly interested in magnetism, studying the earth's magnetic field and designing improvements to the magnetic compass...
and educated at King's College London
King's College London
King's College London is a public research university located in London, United Kingdom and a constituent college of the federal University of London. King's has a claim to being the third oldest university in England, having been founded by King George IV and the Duke of Wellington in 1829, and...
, and at Trinity College, Cambridge
Trinity College, Cambridge
Trinity College is a constituent college of the University of Cambridge. Trinity has more members than any other college in Cambridge or Oxford, with around 700 undergraduates, 430 graduates, and over 170 Fellows...
. He was fourth wrangler in 1868 and elected a fellow of Trinity in 1869.