Encyclopedia
William Bushnell Stout (March 16, 1880 – March 20, 1956) was an inventor, designer whose work in automotive and aviation fields was notable. Stout designed an aircraft that eventually became the Ford Trimotor
Ford Trimotor
The Ford Trimotor was an American three-engined transport plane that was first produced in 1925 by the companies of Henry Ford and that continued to be produced until June 7, 1933. Throughout its time in production, a total of 199 Ford Trimotors were produced...
and was an executive at the Ford Motor Company
Ford Motor Company
Ford Motor Company is an American multinational automaker based in Dearborn, Michigan, a suburb of Detroit. The automaker was founded by Henry Ford and incorporated on June 16, 1903. In addition to the Ford and Lincoln brands, Ford also owns a small stake in Mazda in Japan and Aston Martin in the UK...
.

William Bushnell Stout was born March 16, 1880 in Quincy, Illinois
Quincy, Illinois
Quincy, known as Illinois' "Gem City," is a river city along the Mississippi River and the county seat of Adams County. As of the 2010 census the city held a population of 40,633. The city anchors its own micropolitan area and is the economic and regional hub of West-central Illinois, catering a...
. He graduated from the Mechanic Arts High School, in St. Paul, Minnesota in 1898. He then attended Hamline University
Hamline University
-Red Wing location :Hamline was named in honor of Leonidas Lent Hamline, a bishop of the Methodist Church whose interest in the frontier led him to donate $25,000 toward the building of an institution of higher learning in what was then the territory of Minnesota. Today, a statue of Bishop Hamline...
, and transferred in his second year to the University of Minnesota
University of Minnesota
The University of Minnesota, Twin Cities is a public research university located in Minneapolis and St. Paul, Minnesota, United States. It is the oldest and largest part of the University of Minnesota system and has the fourth-largest main campus student body in the United States, with 52,557...
, being forced to quit due to extreme eye problems. He married Alma Raymond in 1906. Stout was interested in mechanics, especially aeronautics, founding the Model Aero Club of Illinois. In 1907 he became Chief Engineer for the Schurmeir Motor Truck Company and in 1912, he became automobile and aviation editor for the Chicago Tribune
Chicago Tribune
The Chicago Tribune is a major daily newspaper based in Chicago, Illinois, and the flagship publication of the Tribune Company. Formerly self-styled as the "World's Greatest Newspaper" , it remains the most read daily newspaper of the Chicago metropolitan area and the Great Lakes region and is...
. In the same year he founded Aerial Age, the first aviation magazine ever published in the United States
United States
The United States of America is a federal constitutional republic comprising fifty states and a federal district...
.He was also a contributor to the Minneapolis Times under the pen name, "Jack Knieff." 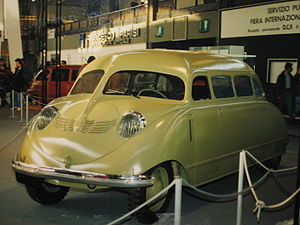 In 1914, Stout became Chief Engineer of the Scripps-Booth
Scripps-Booth
Scripps-Booth was a United States automobile company based in Detroit, Michigan, which produced motor vehicles from 1913 through 1923.-History:...
Automobile Company. His "Cyclecar" had caught the attention of Alvan MacCauley who subsequently brought Stout to Packard Motors in Detroit. He had become General Sales Manager of the Packard Motor Car Company and in 1916, when they started an aviation division, they asked Stout to become its first Chief Engineer. In 1919 he started the Stout Engineering Company in Dearborn, Michigan
Dearborn, Michigan
-Economy:Ford Motor Company has its world headquarters in Dearborn. In addition its Dearborn campus contains many research, testing, finance and some production facilities. Ford Land controls the numerous properties owned by Ford including sales and leasing to unrelated businesses such as the...
, complete with a research section and later built the prototype Stout Scarab
Stout Scarab
The Stout Scarab is a unique 1930s U.S automobile produced in small numbers by Stout Engineering Laboratories and later by Stout Motor Car Company of Detroit, Michigan...
car in 1932. In 1934 he founded the Stout Motor Car Company. The "beetle-like" Scarab featured an all-aluminum tubular airframe covered with aluminum skin, with the engine compartment at the rear, a sealed storage compartment in front of a passenger compartment with reclining aircraft-type seats. The front or nose of the vehicle contained the spare tire. Only nine Scarabs were ever built and although advanced, the public never appreciated the innovative features of the vehicles.

In the mid 1930s, Stout in co-operation with L.B. Kalb of Continental Motors, a major manufacture of light weight air cooled aircraft engines, and did some extensive research and pre-production development into rear rear engine drive automobiles which were powered by aircraft engines. Stout even commissioned the well known Dutch auto designer John Tjaarda to design some stream line car bodies. But none of the car designs ever reached production.

In the last years of World War II, Stout in co-operation with Owen-Corning, began what was called Project Y to built a one-off car for evaluation, to test some ideas like a frame-less fiberglass body, belt drive rear wheel drive, a suspension which kept the vehicle from leaning into turns by adjusting the suspension using compressed air and push button electric doors. When the vehicle was made public in 1946, Stout picked the name Forty-Six for that year. Some firms considered producing the Forty-Six, but as Stout stated he doubt there would be much of a market for a $10,000 dollar car, the estimated price if it had been mass produced.Hacker, G.

Stout's aviation career began as a result of his success in his automotive efforts. He began to build a number of all-metal aircraft designs, which, like the earliest aircraft designs of Andrei Tupolev
Andrei Tupolev
Andrei Nikolayevich Tupolev was a pioneering Soviet aircraft designer.During his career, he designed and oversaw the design of more than 100 types of aircraft, some of which set 78 world records...
in the Soviet Union, was based on the pioneering work of Hugo Junkers
Hugo Junkers
Hugo Junkers was an innovative German engineer, as his many patents in varied areas show...
. In February 1923, newspapers carried stories of the test flights of the Stout Air Sedan with Walter Lees
Walter Lees
Walter Scott Lees was a Surrey and English cricketer who played in 5 Tests against South Africa in 1906....
as the pilot. In 1924 his company, the Stout Metal Airplane Company
Stout Metal Airplane Division of the Ford Motor Company
Stout Metal Airplane Division of the Ford Motor Company was an American aircraft manufacturer founded by William Bushnell Stout. The company was purchased by Ford Motor Company in 1924 and produced the Ford Trimotor. In the height of the Depression, Ford closed the aircraft design and production...
, was bought by the Ford Motor Company.

Stout developed a thick-wing monoplane, and his design of an internally braced cantilevered wing improved the efficiency of aircraft. This led to the development of the famous "Batwing Plane"
Stout Batwing
The Stout Batwing was a low aspect ratio flying wing aircraft designed by William Bushnell Stout. The aircraft was the first example of wood veneer construction on American aircraft and an early practical example of "thick wing" or blended wing fuselage design. The internally braced wing was also...
and the all-metal "Torpedo Plane". After his career at Packard Motors, he left for Washington to serve as the advisor to the United States Aircraft Board.

Stout developed an all-metal transport aircraft for mail use, the Stout 2-AT
Stout 2-AT Pullman
The Stout 2-AT "Pullman" or "Air Pullman" was a single engine all-metal monoplane that was used for early airline travel and air mail transport in America.-Development:...
. His three engine follow-on, the Stout 3-AT, was underpowered, and did not perform as well, leaving Stout out of the engineering role in his company newly acquired by Ford. The redesigned 3-AT did form the basis for the popular Ford Trimotor aircraft.

After the Great Depression in 1929 reduced sales of the Trimotor aircraft, Stout left Ford in 1930. Although no longer with Ford, he continued to operate his Stout Engineering Laboratory. Stout also invested in the short-lived Witchita, Kansas based Buckley Aircraft Company
Buckley Aircraft
Buckley Aircraft Company was a American aircraft manufacturer based out of Wichita, Kansas.Buckley aircraft was founded with $150,000 in capital in 1929 by Fred Buckley, William J. Carr, Earl Jones, A.J Christman, Joesph Paul, and William Bushnell Stout....
, developing the all aluminumn Buckley LC-4
Buckley LC-4
-External links:*...
.

In 1930 Stout said: "Aviation in the U. S. has been stagnating for two years. We are all copying. Aviation has shown no progress . . . comparable to that made in radio and talking pictures. Think how many copies have been made of the plane Colonel Lindbergh used on his flight across the Atlantic ... of other famous planes. None of us are building the plane that the public wants to buy, and that proves we are standing still."

Stout's other innovations included the Skycar
Stout Skycar
-External links:*...
, an automobile/airplane hybrid and a Pullman Railplane and Club Car. He is also known as the originator of prefab housing and the sliding car seat. All of these innovations were modern in design, incorporating many features new in both appearance and function, features not yet available in vehicle design.

Stout is remembered for his Farberistic engineering credo, "Simplicate and add more lightness." This would later become best known as the adopted maxim of Colin Chapman
Colin Chapman
Anthony Colin Bruce Chapman CBE was an influential British designer, inventor, and builder in the automotive industry, and founder of Lotus Cars....
of Lotus Cars
Lotus Cars
Lotus Cars is a British manufacturer of sports and racing cars based at the former site of RAF Hethel, a World War II airfield in Norfolk. The company designs and builds race and production automobiles of light weight and fine handling characteristics...
. It actually originated with Stout's designer Gordon Hooton.