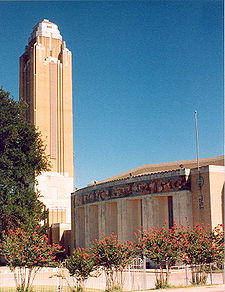 The Will Rogers Memorial Center (WRMC) is an 85 acre (0.3439831 km²) public entertainment, sports and livestock complex located in Fort Worth
Fort Worth, Texas
Fort Worth is the 16th-largest city in the United States of America and the fifth-largest city in the state of Texas. Located in North Central Texas, just southeast of the Texas Panhandle, the city is a cultural gateway into the American West and covers nearly in Tarrant, Parker, Denton, and...
, Texas
Texas
Texas is the second largest U.S. state by both area and population, and the largest state by area in the contiguous United States.The name, based on the Caddo word "Tejas" meaning "friends" or "allies", was applied by the Spanish to the Caddo themselves and to the region of their settlement in...
(USA
United States
The United States of America is a federal constitutional republic comprising fifty states and a federal district...
). The complex is named for American humorist and writer Will Rogers
Will Rogers
William "Will" Penn Adair Rogers was an American cowboy, comedian, humorist, social commentator, vaudeville performer, film actor, and one of the world's best-known celebrities in the 1920s and 1930s....
. The WRMC is the home of the annual Fort Worth Stock Show and Rodeo. It is a popular location for the hosting of specialized livestock
Livestock
Livestock refers to one or more domesticated animals raised in an agricultural setting to produce commodities such as food, fiber and labor. The term "livestock" as used in this article does not include poultry or farmed fish; however the inclusion of these, especially poultry, within the meaning...
shows, including the annual World Exposition of the Texas Longhorn Breeders Association of America
Texas Longhorn Breeders Association of America
The Texas Longhorn Breeders Association of America is a North American organization of ranchers who participate in the breeding and husbandry of Texas Longhorn cattle. Based in Fort Worth, Texas, the organization was founded in 1964 to serve as a registry for the longhorn breed...
, the annual World Championship Paint Horse Show, and 3 major events of the National Cutting Horse Association (NCHA) each year. It is also the former home of the Fort Worth Texans
Fort Worth Texans
The Fort Worth Texans were a professional ice hockey team based in Fort Worth, Texas. They started play in 1967 as the Fort Worth Wings, a minor league affiliate for the Detroit Red Wings. They were part of the Central Hockey League and played their home games at Will Rogers Coliseum...
ice hockey
Ice hockey
Ice hockey, often referred to as hockey, is a team sport played on ice, in which skaters use wooden or composite sticks to shoot a hard rubber puck into their opponent's net. The game is played between two teams of six players each. Five members of each team skate up and down the ice trying to take...
team. Events at the WRMC attract over 2 million visitors annually. The complex contains the following facilities:


The Memorial Center was built in 1936 and designed by architect
Architect
An architect is a person trained in the planning, design and oversight of the construction of buildings. To practice architecture means to offer or render services in connection with the design and construction of a building, or group of buildings and the space within the site surrounding the...
Wyatt C. Hedrick
Wyatt C. Hedrick
Wyatt Cephus Hedrick was an American architect, engineer, and developer most active in Texas and the American South....
, who employed the Moderne
Art Deco
Art deco , or deco, is an eclectic artistic and design style that began in Paris in the 1920s and flourished internationally throughout the 1930s, into the World War II era. The style influenced all areas of design, including architecture and interior design, industrial design, fashion and...
(Art Deco) style.