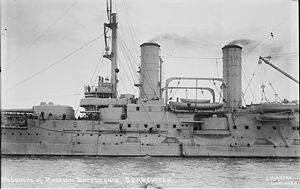 Wilgelm Karlovich Vitgeft (October 14, 1847 – August 10, 1904), sometimes written Wilhelm and Withöft was an admiral in the Imperial Russian Navy
Imperial Russian Navy
The Imperial Russian Navy refers to the Tsarist fleets prior to the February Revolution.-First Romanovs:Under Tsar Mikhail Feodorovich, construction of the first three-masted ship, actually built within Russia, was completed in 1636. It was built in Balakhna by Danish shipbuilders from Holstein...
, noted for his service in the Russo-Japanese War
Russo-Japanese War
The Russo-Japanese War was "the first great war of the 20th century." It grew out of rival imperial ambitions of the Russian Empire and Japanese Empire over Manchuria and Korea...
of 1904-1905.

Vitgeft was born in Odessa
Odessa
Odessa or Odesa is the administrative center of the Odessa Oblast located in southern Ukraine. The city is a major seaport located on the northwest shore of the Black Sea and the fourth largest city in Ukraine with a population of 1,029,000 .The predecessor of Odessa, a small Tatar settlement,...
, and was of German ancestry
History of Germans in Russia and the Soviet Union
The German minority in Russia and the Soviet Union was created from several sources and in several waves. The 1914 census puts the number of Germans living in Russian Empire at 2,416,290. In 1989, the German population of the Soviet Union was roughly 2 million. In the 2002 Russian census, 597,212...
. He graduated from the Sea Cadet Corps
Sea Cadet Corps (Russia)
The Sea Cadet Corps , occasionally translated as the Marine Cadet Corps or the Naval Cadet Corps, is an educational establishment for training Naval officers for the Russian Navy in Saint Petersburg.It is the oldest existing high school in Russia.-History:...
in 1868 and subsequently circumnavigated the globe on the clipper
Clipper
A clipper was a very fast sailing ship of the 19th century that had three or more masts and a square rig. They were generally narrow for their length, could carry limited bulk freight, small by later 19th century standards, and had a large total sail area...
Wsadnik. After his return to Russia, he was promoted to NCO
Non-commissioned officer
A non-commissioned officer , called a sub-officer in some countries, is a military officer who has not been given a commission...
in 1870 and to lieutenant in 1873. From 1875 to 1878 he received specialized training as a naval artillery
Naval artillery
Naval artillery, or naval riflery, is artillery mounted on a warship for use in naval warfare. Naval artillery has historically been used to engage either other ships, or targets on land; in the latter role it is currently termed naval gunfire fire support...
and mine warfare
Mine warfare
Mine warfare refers to the use of different types of explosive devices:*Land mine, a weight-triggered explosive device intended to maim or kill people or to destroy vehicles...
expert. Thereafter he served in various functions on ships of the Russian Baltic Fleet. In 1885, as a captain of the second rank, he was assigned his first command, that of the gunboat
Gunboat
A gunboat is a naval watercraft designed for the express purpose of carrying one or more guns to bombard coastal targets, as opposed to those military craft designed for naval warfare, or for ferrying troops or supplies.-History:...
Groza. He sunsequently served as an inspector of works for the Marine Technical Committee, and as the Assistant Chief Inspector of Mines, was responsible for testing naval mine
Naval mine
A naval mine is a self-contained explosive device placed in water to destroy surface ships or submarines. Unlike depth charges, mines are deposited and left to wait until they are triggered by the approach of, or contact with, an enemy vessel...
s.

In 1892, Vitgeft took over command of the cruiser Voyevoda and was promoted to Captain 1st Rank in 1894. On 26 October 1899 Vitgeft was promoted to Rear Admiral and was transferred to the Russian Pacific Fleet. He was awarded the Order of St. Stanislaus (1st class with Swords) for participation in the Russian-Chinese War
Boxer Rebellion
The Boxer Rebellion, also called the Boxer Uprising by some historians or the Righteous Harmony Society Movement in northern China, was a proto-nationalist movement by the "Righteous Harmony Society" , or "Righteous Fists of Harmony" or "Society of Righteous and Harmonious Fists" , in China between...
of 1900. where he served as chief of staff to Viceroy, Yevgeny Alexeiev, until 1903.

After the outbreak of the Russo-Japanese War
Russo-Japanese War
The Russo-Japanese War was "the first great war of the 20th century." It grew out of rival imperial ambitions of the Russian Empire and Japanese Empire over Manchuria and Korea...
of 1904-1905, Vitgeft became chief of the Naval Headquarters in the Far East. Following the death of Admiral Stepan Makarov
Stepan Makarov
Stepan Osipovich Makarov was a Ukrainian - born Russian vice-admiral, a highly accomplished and decorated commander of the Imperial Russian Navy, an oceanographer, awarded by the Russian Academy of Sciences, and author of several books. Makarov also designed a small number of ships...
, Vitgeft was appointed temporary commander of the portion of the "First Pacific Squadron", that portion of the Russian Pacific Fleet trapped at Port Arthur
Lüshunkou
Lüshunkou is a district in the municipality of Dalian, Liaoning province, China. Also called Lüshun City or Lüshun Port, it was formerly known as both Port Arthur and Ryojun....
by the Japanese blockade
Battle of Port Arthur
The Battle of Port Arthur was the starting battle of the Russo-Japanese War...
.

Viceroy Alexeiev, a former admiral, favored an aggressive sortie
Sortie
Sortie is a term for deployment or dispatch of one military unit, be it an aircraft, ship, or troops from a strongpoint. The sortie, whether by one or more aircraft or vessels, usually has a specific mission....
so as to enable the First Pacific Squadron to link up with the Vladivostok Squadron and thereby create a naval force powerful enough to challenge the Japanese fleet. Vitgeft believed "in a fleet in being", which simply stayed at anchor, while at the same time contributing some of his weaponry to the land battle
Siege of Port Arthur
The Siege of Port Arthur , 1 August 1904 – 2 January 1905, the deep-water port and Russian naval base at the tip of the Liaotung Peninsula in Manchuria, was the longest and most violent land battle of the Russo-Japanese War....
as the safest course to follow. Although passive, Vitgeft's preference was actually more in keeping with the Russian Navy's doctrine, which was building up strength (waiting for the arrival of the Baltic Fleet, renamed as the "2nd Pacific Squadron"), and then engaging the Japanese navy in decisive battle. Alexeiev appealed to St. Petersburg, and Tsar Nicholas II replied that he fully shared the Viceroy's opinion. Faced with an Imperial writ and threat of legal action, Admiral Vitgeft was ordered to sail for Vladivostok
Vladivostok
The city is located in the southern extremity of Muravyov-Amursky Peninsula, which is about 30 km long and approximately 12 km wide.The highest point is Mount Kholodilnik, the height of which is 257 m...
immediately. By 06:15 hours, on 10 August 1904, Admiral Vitgeft, flying his flag in the battleship Tsesarevich, began leading his fleet from the harbor.

The Russian fleet consisted of the battleships , , , Peresvet
Japanese battleship Sagami
was one of eight Russian pre-dreadnought battleships captured by the Imperial Japanese Navy during the Russo-Japanese War of 1904–1905. It was built as the lead ship of the of battleships, with a design inspired by the British battleship...
, , and Poltava
Japanese battleship Tango
The Russian battleship Poltava was a Petropavlovsk-class battleship of the Imperial Russian Navy. She was one of eight Russian pre-dreadnought battleships captured by the Imperial Japanese Navy during the Russo-Japanese War of 1904–1905. Poltava was built at the Galernii Island shipyard, one of a...
, the protected cruiser
Protected cruiser
The protected cruiser is a type of naval cruiser of the late 19th century, so known because its armoured deck offered protection for vital machine spaces from shrapnel caused by exploding shells above...
s , , and , and 14 destroyer
Destroyer
In naval terminology, a destroyer is a fast and maneuverable yet long-endurance warship intended to escort larger vessels in a fleet, convoy or battle group and defend them against smaller, powerful, short-range attackers. Destroyers, originally called torpedo-boat destroyers in 1892, evolved from...
s. In the subsequent Battle of the Yellow Sea
Battle of the Yellow Sea
The Battle of the Yellow Sea was a major naval engagement of the Russo-Japanese War, fought on 10 August 1904. In the Russian Navy, it was referred to as the Battle of 10 August. The battle foiled an attempt by the Russian fleet at Port Arthur to break out and form up with counterparts from...
, the Imperial Japanese Navy
Imperial Japanese Navy
The Imperial Japanese Navy was the navy of the Empire of Japan from 1869 until 1947, when it was dissolved following Japan's constitutional renunciation of the use of force as a means of settling international disputes...
's Combined Fleet
Combined Fleet
The was the main ocean-going component of the Imperial Japanese Navy. The Combined Fleet was not a standing force, but a temporary force formed for the duration of a conflict or major naval maneuvers from various units normally under separate commands in peacetime....
under Admiral Togo Heihachiro
Togo Heihachiro
Fleet Admiral Marquis was a Fleet Admiral in the Imperial Japanese Navy and one of Japan's greatest naval heroes. He was termed by Western journalists as "the Nelson of the East".-Early life:...
intercepted the Russian fleet. At 18:40 on 10 August 1904, Admiral Vitgeft and his immediate staff were killed instantly when a 305 mm salvo form the Japanese battleship struck the bridge
Bridge (ship)
The bridge of a ship is the room or platform from which the ship can be commanded. When a ship is underway the bridge is manned by an OOW aided usually by an AB acting as lookout...
of the Russian flagship Tsesarevich. The shell also jammed the flagship's steering into a shaft port turn, which threw the Russian line of battle
Line of battle
In naval warfare, the line of battle is a tactic in which the ships of the fleet form a line end to end. A primitive form had been used by the Portuguese under Vasco Da Gama in 1502 near Malabar against a Muslim fleet.,Maarten Tromp used it in the Action of 18 September 1639 while its first use in...
into confusion. Five battleships, a cruiser and nine destroyers escaped back to Port Arthur; however, the damaged Tsesarevich and three escorting destroyers sailed to Kiaochou, where they were interned by British
United Kingdom
The United Kingdom of Great Britain and Northern IrelandIn the United Kingdom and Dependencies, other languages have been officially recognised as legitimate autochthonous languages under the European Charter for Regional or Minority Languages...
authorities.