Encyclopedia
Wildflecken is a municipality
Municipalities of Germany
Municipalities are the lowest level of territorial division in Germany. This may be the fourth level of territorial division in Germany, apart from those states which include Regierungsbezirke , where municipalities then become the fifth level.-Overview:With more than 3,400,000 inhabitants, the...
in the Bad Kissingen
Bad Kissingen
Bad Kissingen is a spa town in the Bavarian region of Lower Franconia and is the seat of the district Bad Kissingen. Situated to the south of the Rhön Mountains on the Franconian Saale river, it is a world-famous health resort.- Town structure :...
district, at the border of northeastern Bavaria
Bavaria
Bavaria, formally the Free State of Bavaria is a state of Germany, located in the southeast of Germany. With an area of , it is the largest state by area, forming almost 20% of the total land area of Germany...
and southern Hesse
Hesse
Hesse or Hessia is both a cultural region of Germany and the name of an individual German state.* The cultural region of Hesse includes both the State of Hesse and the area known as Rhenish Hesse in the neighbouring Rhineland-Palatinate state...
. In 2005, its population was 3,285; the postal code is 97772. Wildflecken is in the picturesque Rhön hills and nature-park.

In 1937 the German Army established a large training area in the Rhoen area. Northeast of the village a camp, large enough to house about 9,000 soldiers and 1,500 horses was built. The camp (Camp Wildflecken) and training-area was primarily used by the German Army (Wehrmacht) as well as by the Waffen-SS. During the war several Wehrmacht and Waffen-SS divisions were activated and trained for combat in Wildflecken. Also located in Wildflecken was an ammunition factory and two POW camps, one for Russian POWs and one for POWs of Belgian and French origin.
In 1945 elements of the U.S. 14th Armored Division
U.S. 14th Armored Division
The 14th Armored Division was an armored division of the United States Army in World War II. It remains on the permanent rolls of the Regular Army as an inactive division, and is eligible for reactivation should the need ever arise...
took control of the camp and the training area in April 1945.

After 1951, its range served as a US Army training base operated by the 7th Army Training Command in Grafenwöhr
Grafenwöhr
Grafenwöhr is a town in the district Neustadt , in the region of the Upper Palatinate in eastern Bavaria, Germany. It is widely known for the United States Army military installation and training area, called Grafenwöhr Training Area, located directly south and west of the town.- Early History:The...
,and it was home station for several U.S.Army units to include Armored, Infantry (Mech), Military Intelligence and logistical units, primarily the 373d AIB of the 19th (later 4th) Armored Group. It also served as a base for Bundesgrenschutz (border police) units and later for the new German Army (Bundeswehr). The Wildflecken Kaserne was decommissioned by the U.S.Army and transferred to the Bundeswehr in 1994. 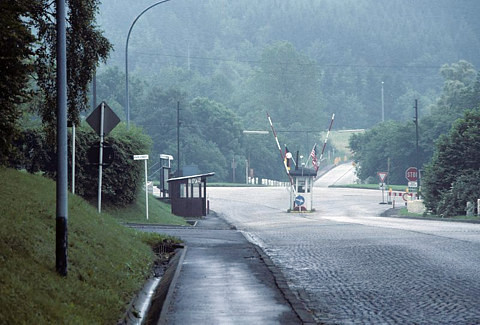 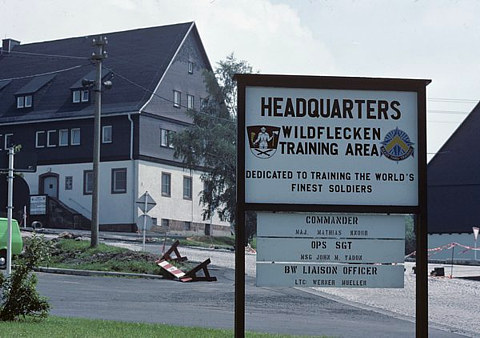 Currently, it is home of the German Army "Warfighters Simulation Center", the training area is primarily used by the German Infantry School.