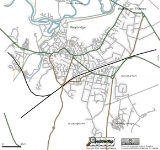 Weybridge is made up of a number of distinct areas: town centre shopping area, Monument Hill / Queens Road shopping area, St George's Hill, Brooklands
Brooklands
Brooklands was a motor racing circuit and aerodrome built near Weybridge in Surrey, England. It opened in 1907, and was the world's first purpose-built motorsport venue, as well as one of Britain's first airfields...
and Oatlands Village
Oatlands
Oatlands is a village and small district near Weybridge in Surrey which has acquired its name from the Royal Tudor and Stuart Oatlands Palace, the site of which is now a luxury hotel...
.

Weybridge lay within the Saxon
Anglo-Saxons
Anglo-Saxon is a term used by historians to designate the Germanic tribes who invaded and settled the south and east of Great Britain beginning in the early 5th century AD, and the period from their creation of the English nation to the Norman conquest. The Anglo-Saxon Era denotes the period of...
administrative district of Elmbridge
Elmbridge (hundred)
Elmbridge Hundred or the Hundred of Elmbridge was an ancient hundred in the north of the county of Surrey, England. The majority of its area forms the borough of Elmbridge in Surrey, with the remainder now forming part of Greater London....
hundred
Hundred (division)
A hundred is a geographic division formerly used in England, Wales, Denmark, South Australia, some parts of the United States, Germany , Sweden, Finland and Norway, which historically was used to divide a larger region into smaller administrative divisions...
.

Weybridge appears in Domesday Book
Domesday Book
Domesday Book , now held at The National Archives, Kew, Richmond upon Thames in South West London, is the record of the great survey of much of England and parts of Wales completed in 1086...
of 1086 as Webrige and Webruge. It was held partly by Chertsey Abbey
Chertsey Abbey
Chertsey Abbey, dedicated to St Peter, was a Benedictine monastery located at Chertsey in the English county of Surrey.It was founded by Saint Erkenwald, later Bishop of London, in 666 AD and he became the first abbot. In the 9th century it was sacked by the Danes and refounded from Abingdon Abbey...
; partly by an Englishman from the abbey; and partly by Herfrid from the Bishop of Bayeux. Its domesday assets were: 6 hide
Hide (unit)
The hide was originally an amount of land sufficient to support a household, but later in Anglo-Saxon England became a unit used in assessing land for liability to "geld", or land tax. The geld would be collected at a stated rate per hide...
s; 1½ plough
Plough
The plough or plow is a tool used in farming for initial cultivation of soil in preparation for sowing seed or planting. It has been a basic instrument for most of recorded history, and represents one of the major advances in agriculture...
s, 32 acres (129,499.5 m²) of meadow
Meadow
A meadow is a field vegetated primarily by grass and other non-woody plants . The term is from Old English mædwe. In agriculture a meadow is grassland which is not grazed by domestic livestock but rather allowed to grow unchecked in order to make hay...
, wood worth 9 hogs. It rendered £4.

The early history of Weybridge was simply as a river crossing. In 1537 it became the location of Oatlands Palace
Oatlands
Oatlands is a village and small district near Weybridge in Surrey which has acquired its name from the Royal Tudor and Stuart Oatlands Palace, the site of which is now a luxury hotel...
built by Henry VIII
Henry VIII of England
Henry VIII was King of England from 21 April 1509 until his death. He was Lord, and later King, of Ireland, as well as continuing the nominal claim by the English monarchs to the Kingdom of France...
, which was where he married his 5th wife Catherine Howard
Catherine Howard
Catherine Howard , also spelled Katherine, Katheryn or Kathryn, was the fifth wife of Henry VIII of England, and sometimes known by his reference to her as his "rose without a thorn"....
. When it was demolished in 1650, bricks from its walls helped to line the then new Wey Navigation canal. Part of the original site of the Palace is now occupied by Oatlands Park Hotel. St. George's Hill was the site of the Diggers' Commune in the 1640s.

At the bottom of Monument Hill, close to the town centre is a monument to the Duchess of York, erected by public subscription in 1820 from the remains of the original Seven Dials
Seven Dials
Seven Dials is a small but well-known road junction in the West End of London in Covent Garden where seven streets converge. At the centre of the roughly-circular space is a pillar bearing six sundials, a result of the pillar being commissioned before a late stage alteration of the plans from an...
Monument that stood in St. Martin's Lane, London until 1773. The Duchess is buried in St. James's Churchyard.

The entomologist, Horace Donisthorpe
Horace Donisthorpe
Horace St. John Kelly Donisthorpe was an eccentric British myrmecologist and coleopterist, memorable in part for his enthusiastic championing of the renaming of the genus Lasius after him as Donisthorpea, and for his many claims of discovering new species of beetles and ants.He is often considered...
, visited Weybridge Heath to investigate the ant
Ant
Ants are social insects of the family Formicidae and, along with the related wasps and bees, belong to the order Hymenoptera. Ants evolved from wasp-like ancestors in the mid-Cretaceous period between 110 and 130 million years ago and diversified after the rise of flowering plants. More than...
colony.

Weybridge railway station
Weybridge railway station
Weybridge railway station serves Weybridge in the Elmbridge district of Surrey, England. It is located on the South Western Main Line operated by South West Trains, 19 miles from London Waterloo....
was opened by the London and Southampton Railway
London and South Western Railway
The London and South Western Railway was a railway company in England from 1838 to 1922. Its network extended from London to Plymouth via Salisbury and Exeter, with branches to Ilfracombe and Padstow and via Southampton to Bournemouth and Weymouth. It also had many routes connecting towns in...
in 1838. After the station was opened, development of what was up until then only a village began. Large houses were built on St George's Hill from 1911 by local builder & developer Walter George Tarrant
Walter George Tarrant
Walter George Tarrant was a builder born in Brockhurst, near Gosport, Hampshire, England. He is best known as a Surrey master builder and developer of St George’s Hill and the Wentworth Estate in Surrey....
of Byfleet; and gradually Weybridge became a town. 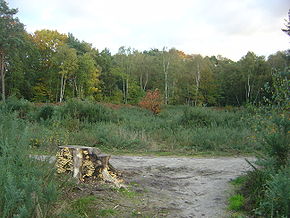 In Weybridge Heath
Weybridge Heath
Weybridge Heath is a part of Weybridge common.The Heath comprises 47 acres of lowland heathland that runs from the deep cutting of the South Western Main Line railway eastwards to Cobbetts Hill...
, many rare species of insect
Insect
Insects are a class of living creatures within the arthropods that have a chitinous exoskeleton, a three-part body , three pairs of jointed legs, compound eyes, and two antennae...
s (particularly ant
Ant
Ants are social insects of the family Formicidae and, along with the related wasps and bees, belong to the order Hymenoptera. Ants evolved from wasp-like ancestors in the mid-Cretaceous period between 110 and 130 million years ago and diversified after the rise of flowering plants. More than...
s), rare birds and insectivorous plant formerly occurred. The heath was allowed to become vastly overgrown in recent years, but recently Surrey Wildlife Trust
Surrey Wildlife Trust
Surrey Wildlife Trust is a Wildlife Trust in Surrey, a county in South East England. The Trust's vision is for a living landscape in Surreythat is rich in wildlife and valued by all. It is the only organisation in Surrey that cares for all forms of wildlife in the county.Surrey Wildlife Trust is...
invoked a scrub clearance plan in an attempt to restore this valuable habitat.

Eurotax Glass, owners and publishers of Glass's Guide
Glass's Guide
Glass’s Guide is the leading British motor trades guide to used car prices, often referred to in the trade as "The Bible."Monitoring car values for almost 75 years since 1933, Glass’s Guide has reflected how cars have become increasingly affordable...
, pricing bible to the motor industry are based in Weybridge.

Two schools for 11-18-year-olds serve Weybridge, Heathside School
Heathside School
Heathside School is a comprehensive Technology College for students aged 11–18 situated in Brooklands Lane, Weybridge, Surrey. The current principal is Anne Cullum and the current vice principals are Mrs K Targett and Dr N Price. The school is well established as a Foundation Community...
and 6th Form Centre in the town itself and St George's College
St George's College, Weybridge
St George's College, Weybridge is an independent mixed Roman Catholic co-educational day school in Surrey, England. It had historically been an all-boys' boarding school. The first girls entered the 6th Form in the 1960s and the school decided to take girls at age 11 in 1998...
in nearby Addlestone
Addlestone
Addlestone is a town in the borough of Runnymede in the county of Surrey, England.Immediate surrounding towns and villages include Weybridge, Ottershaw, Chertsey, and New Haw. It is near Junction 11 of the M25 motorway and is served by Addlestone railway station on the Chertsey Branch Line. It also...
. There is also Brooklands College
Brooklands College
Brooklands College is a further education college in Weybridge and Ashford. In August 2007, Brooklands merged with Spelthorne College in Ashford. The Weybridge campus is set in the grounds of Hugh F. Lock-King's historic mansion at Brooklands. The Ashford campus is located on Ashford's high...
, for sixth form students in further education focussing particularly in BTECs
Business And Technology Education Council (BTEC)
The Business and Technology Education Council is the British body which awards vocational qualifications. Such qualifications are commonly referred to as "BTECs"....
. Also, there are many primary schools to serve 4-11 year olds such as Oatlands Primary School, Cleves School, Walton Oak, Burhill and Manby Lodge.

Notable residents, past and present, include:

The famous former Brooklands
Brooklands
Brooklands was a motor racing circuit and aerodrome built near Weybridge in Surrey, England. It opened in 1907, and was the world's first purpose-built motorsport venue, as well as one of Britain's first airfields...
Aerodrome and Motor Circuit is located between Weybridge and Byfleet and is now the location of the Brooklands Museum
Brooklands Museum
Brooklands Museum is an independent charitable trust, established in 1987, whose aim is to conserve, protect and interpret the unique heritage of the Brooklands site. It is located south of Weybridge, Surrey and was first opened regularly in 1991 on of the original 1907 motor-racing circuit...
. The brainchild of Hugh Locke-King, Brooklands was opened on 17 June 1907 and was the first purpose-built motor racing circuit in the world. Its unique kidney-shaped layout was designed by Colonel H C Holden of the Royal Engineers and featured two steep and distinctive banked sections at opposite ends. Soon after it opened, the sheltered private location attracted early aviators and aeroplane designers such as Roe and Sopwith and the centre of the track soon became one of Britain's first aerodromes and later played a major part in aviation worldwide during much of the 20th century, most notably with the British Aerospace
British Aerospace
British Aerospace plc was a UK aircraft, munitions and defence-systems manufacturer. Its head office was in the Warwick House in the Farnborough Aerospace Centre in Farnborough, Hampshire...
, British Aircraft Corporation
British Aircraft Corporation
The British Aircraft Corporation was a British aircraft manufacturer formed from the government-pressured merger of English Electric Aviation Ltd., Vickers-Armstrongs , the Bristol Aeroplane Company and Hunting Aircraft in 1960. Bristol, English Electric and Vickers became "parents" of BAC with...
, Hawker
Hawker Aircraft
Hawker Aircraft Limited was a British aircraft manufacturer responsible for some of the most famous products in British aviation history.-History:...
, Sopwith and Vickers
Vickers
Vickers was a famous name in British engineering that existed through many companies from 1828 until 1999.-Early history:Vickers was formed in Sheffield as a steel foundry by the miller Edward Vickers and his father-in-law George Naylor in 1828. Naylor was a partner in the foundry Naylor &...
aircraft companies.