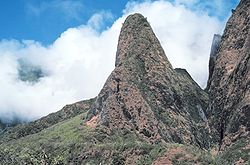 The West Maui Mountains or West Maui Volcano, known to the Hawaiians
Native Hawaiians
Native Hawaiians refers to the indigenous Polynesian people of the Hawaiian Islands or their descendants. Native Hawaiians trace their ancestry back to the original Polynesian settlers of Hawaii.According to the U.S...
as Maui Komohana and to geologists as Mauna Kahalawai, forms a much eroded
Erosion
Erosion is when materials are removed from the surface and changed into something else. It only works by hydraulic actions and transport of solids in the natural environment, and leads to the deposition of these materials elsewhere...
shield volcano
Shield volcano
A shield volcano is a type of volcano usually built almost entirely of fluid lava flows. They are named for their large size and low profile, resembling a warrior's shield. This is caused by the highly fluid lava they erupt, which travels farther than lava erupted from more explosive volcanoes...
that constitutes the western one-quarter of the Hawaiian
Hawaiian Islands
The Hawaiian Islands are an archipelago of eight major islands, several atolls, numerous smaller islets, and undersea seamounts in the North Pacific Ocean, extending some 1,500 miles from the island of Hawaii in the south to northernmost Kure Atoll...
Island of Maui
Maui
The island of Maui is the second-largest of the Hawaiian Islands at and is the 17th largest island in the United States. Maui is part of the state of Hawaii and is the largest of Maui County's four islands, bigger than Lānai, Kahoolawe, and Molokai. In 2010, Maui had a population of 144,444,...
.

The three moku or districts of west Maui are Lāhaina, Kāanapali, and Wailuku. Wailuku is also known as Pūalikomohana, or Nā Wai Ehā which means the four waters. The 4 waters are the ahupuaa
Ahupua'a
In old Hawaii, ahupuaa was the common subdivision of the land. It is comparable to the tapere in the Southern Cook Islands. The traditional subdivision has four hierarchical levels:*mokupuni *moku...
(smaller land division than district), which are Waikapū, Wailuku, Waiehu, and Waihee.

The port of Lāhainā lies on the southwestern slope.

The summit peak is called Puu Kukui
Puu Kukui
Puu Kukui is a mountain peak in Hawaii. It is the highest peak of Mauna Kahalawai . The summit rises above the Puu Kukui Watershed Management Area, an private nature preserve maintained by the Maui Land & Pineapple Company...
, at 5788 feet (1,764.2 m) elevation.

Established in 1988, the Puu Kukui Preserve is the largest private nature preserve in the State of Hawaii. Since 1994, the 8661 acres (35 km²) preserve has been managed by Maui Land & Pineapple Company
Maui Land & Pineapple Company
Maui Land & Pineapple Company, Inc. is a land holding and operating company founded in 1909 and based in Maui, Hawaii, United States. It owns approximately on the island of Maui. It develops, sells, and manages residential, resort, commercial and industrial real estate; and operates retail, golf...
in participation with The Nature Conservancy
The Nature Conservancy
The Nature Conservancy is a US charitable environmental organization that works to preserve the plants, animals, and natural communities that represent the diversity of life on Earth by protecting the lands and waters they need to survive....
and the State Natural Area Partnership. These groups work together to protect the watershed lands of the West Maui mountain.