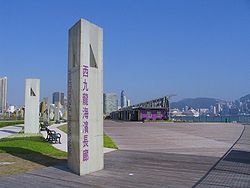 West Kowloon Waterfront Promenade (Chinese:
Chinese language
The Chinese language is a language or language family consisting of varieties which are mutually intelligible to varying degrees. Originally the indigenous languages spoken by the Han Chinese in China, it forms one of the branches of Sino-Tibetan family of languages...
西九龍海濱長廊) is a promenade along Victoria Harbour
Victoria Harbour
Victoria Harbour is a natural landform harbour situated between Hong Kong Island and the Kowloon Peninsula in Hong Kong. The harbour's deep, sheltered waters and strategic location on the South China Sea were instrumental in Hong Kong's establishment as a British colony and its subsequent...
on the reclamation
Land reclamation in Hong Kong
Land is in short supply in Hong Kong, and land reclamation has been conducted there since the mid-19th century.-Projects:One of the earliest and famous project was the Praya Reclamation Scheme, which added 50 to of land in 1890 during the second phase of construction...
of west of Kwun Chung
Kwun Chung
Kwun Chung , or Koon Chung in early document, is an area of Hong Kong, southwest of Yau Ma Tei located in the Yau Tsim Mong District of western Kowloon Peninsula. South of the area, across Austin Road is Tsim Sha Tsui by Victoria Harbour...
in Kowloon
Kowloon
Kowloon is an urban area in Hong Kong comprising the Kowloon Peninsula and New Kowloon. It is bordered by the Lei Yue Mun strait in the east, Mei Foo Sun Chuen and Stonecutter's Island in the west, Tate's Cairn and Lion Rock in the north, and Victoria Harbour in the south. It had a population of...
of Hong Kong
Hong Kong
Hong Kong is one of two Special Administrative Regions of the People's Republic of China , the other being Macau. A city-state situated on China's south coast and enclosed by the Pearl River Delta and South China Sea, it is renowned for its expansive skyline and deep natural harbour...
. It was open to public on 17 September 2005.

As the project West Kowloon Cultural District
West Kowloon Cultural District
The West Kowloon Cultural District is a proposed and developing project to boost cultural and entertainment establishments at Hong Kong, SAR...
remains stagnant after long debate, Hong Kong Government construct a promenade on an unused reclamation. The promenade is decorated with pillars of wind chime
Wind chime
Wind chimes are chimes constructed from suspended tubes, rods, bells or other objects and are often made of metal or wood. Wind chimes are usually hung outside of a building or residence, as a visual and aural garden ornament, and are to be played by the wind....
s and illuminated painting
Painting
Painting is the practice of applying paint, pigment, color or other medium to a surface . The application of the medium is commonly applied to the base with a brush but other objects can be used. In art, the term painting describes both the act and the result of the action. However, painting is...
and calligraphy
Calligraphy
Calligraphy is a type of visual art. It is often called the art of fancy lettering . A contemporary definition of calligraphic practice is "the art of giving form to signs in an expressive, harmonious and skillful manner"...
of various styles.

The 700m section along the shore is covered with wooden strips which made from construction waste.

There are 70 four-metre-high triangular lighting towers on the one-kilometre-long "Dragon of Lanterns" . Wind chime
Wind chime
Wind chimes are chimes constructed from suspended tubes, rods, bells or other objects and are often made of metal or wood. Wind chimes are usually hung outside of a building or residence, as a visual and aural garden ornament, and are to be played by the wind....
s are hung at the top of the lighting towers.
The source of this article is wikipedia, the free encyclopedia.  The text of this article is licensed under the GFDL.