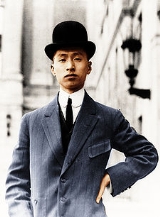 Koo returned to China in 1912 to serve the new Republic of China
Republic of China
The Republic of China , commonly known as Taiwan , is a unitary sovereign state located in East Asia. Originally based in mainland China, the Republic of China currently governs the island of Taiwan , which forms over 99% of its current territory, as well as Penghu, Kinmen, Matsu and other minor...
as English Secretary to President Yuan Shikai
Yuan Shikai
Yuan Shikai was an important Chinese general and politician famous for his influence during the late Qing Dynasty, his role in the events leading up to the abdication of the last Qing Emperor of China, his autocratic rule as the second President of the Republic of China , and his short-lived...
. In 1915 Koo was made China's Minister to the United States and Cuba. In 1919 he was a member of the Chinese delegation to the Paris Peace Conference
Paris Peace Conference, 1919
The Paris Peace Conference was the meeting of the Allied victors following the end of World War I to set the peace terms for the defeated Central Powers following the armistices of 1918. It took place in Paris in 1919 and involved diplomats from more than 32 countries and nationalities...
, led by Foreign Minister Lou Tseng-Tsiang
Lou Tseng-Tsiang
Lou Tseng-Tsiang was a Chinese diplomat and a Roman Catholic monk. He was twice Premier of the Republic of China and led his country's delegation at the Paris Peace Conference of 1919...
. Before the Western powers and Japan, he demanded that Japan return Shandong
Shandong Problem
The Shantung Problem refers to the dispute over Article 156 of the Treaty of Versailles in 1919, which dealt with the concession of the Shandong peninsula....
to China. He also called for an end to imperialist institutions such as extraterritoriality, tariff controls, legation guards, and lease holds. The Western powers refused his claims and, consequently, the Chinese delegation at the Paris Peace Conference was the only nation that did not sign the Treaty of Versailles
Treaty of Versailles
The Treaty of Versailles was one of the peace treaties at the end of World War I. It ended the state of war between Germany and the Allied Powers. It was signed on 28 June 1919, exactly five years after the assassination of Archduke Franz Ferdinand. The other Central Powers on the German side of...
at the signing ceremony.

Koo also was involved in the formation of the League of Nations
League of Nations
The League of Nations was an intergovernmental organization founded as a result of the Paris Peace Conference that ended the First World War. It was the first permanent international organization whose principal mission was to maintain world peace...
as China's first representative to the newly formed League. He was briefly Acting Premier, Interim President, and Foreign Minister in 1926-1927 during a period of chaos in Beijing under Chang Tso-lin. He represented China at the League of Nations to protest the Japanese invasion of Manchuria. He served as the Chinese Ambassador to France from 1936–1940, until France was occupied by Germany. Afterwards he was the Chinese Ambassador to the Court of St. James's
Court of St. James's
The Court of St James's is the royal court of the United Kingdom. It previously had the same function in the Kingdom of England and in the Kingdom of Great Britain .-Overview:...
until 1946. In 1945 Koo was one of the founding members of the United Nations. He later became the Chinese Ambassador to the United States and focused in maintaining the alliance between the Republic of China and the United States as the Kuomintang
Kuomintang
The Kuomintang of China , sometimes romanized as Guomindang via the Pinyin transcription system or GMD for short, and translated as the Chinese Nationalist Party is a founding and ruling political party of the Republic of China . Its guiding ideology is the Three Principles of the People, espoused...
began losing to the Chinese Communists and had to retreat to Taiwan
Taiwan
Taiwan , also known, especially in the past, as Formosa , is the largest island of the same-named island group of East Asia in the western Pacific Ocean and located off the southeastern coast of mainland China. The island forms over 99% of the current territory of the Republic of China following...
.