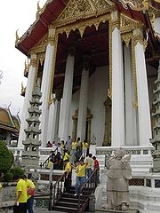 Encyclopedia
A wat is a monastery
Monastery
Monastery denotes the building, or complex of buildings, that houses a room reserved for prayer as well as the domestic quarters and workplace of monastics, whether monks or nuns, and whether living in community or alone .Monasteries may vary greatly in size – a small dwelling accommodating only...
temple
Temple
A temple is a structure reserved for religious or spiritual activities, such as prayer and sacrifice, or analogous rites. A templum constituted a sacred precinct as defined by a priest, or augur. It has the same root as the word "template," a plan in preparation of the building that was marked out...
in Cambodia
Cambodia
Cambodia , officially known as the Kingdom of Cambodia, is a country located in the southern portion of the Indochina Peninsula in Southeast Asia...
, Thailand
Thailand
Thailand , officially the Kingdom of Thailand , formerly known as Siam , is a country located at the centre of the Indochina peninsula and Southeast Asia. It is bordered to the north by Burma and Laos, to the east by Laos and Cambodia, to the south by the Gulf of Thailand and Malaysia, and to the...
, or Laos
Laos
Laos Lao: ສາທາລະນະລັດ ປະຊາທິປະໄຕ ປະຊາຊົນລາວ Sathalanalat Paxathipatai Paxaxon Lao, officially the Lao People's Democratic Republic, is a landlocked country in Southeast Asia, bordered by Burma and China to the northwest, Vietnam to the east, Cambodia to the south and Thailand to the west...
. The word "wat" means "school".

Strictly speaking a wat is a Buddhist sacred precinct with monks' quarters, the temple proper, an edifice housing a large image of Buddha, and a structure for lessons. A Buddhist site without a minimum of three resident monks cannot correctly be described as a wat, although the term is frequently used more loosely, even for ruins of ancient temples. (As a transitive or intransitive verb, wat means to measure, to take measurements; compare templum, from which temple derives, having the same root as template.)

In Cambodia, a wat is used to refer to all kinds of places of worship. Technically, wat generally refers to a Buddhist place of worship, but the technical term is (wat pootasasna). A Christian church can be referred as (vihear yeasu). Angkor Wat
Angkor Wat
Angkor Wat is a temple complex at Angkor, Cambodia, built for the king Suryavarman II in the early 12th century as his state temple and capital city. As the best-preserved temple at the site, it is the only one to have remained a significant religious centre since its foundation – first Hindu,...
means city of temples.

In everyday language in Thailand, a wat is any place of worship except a mosque
Mosque
A mosque is a place of worship for followers of Islam. The word is likely to have entered the English language through French , from Portuguese , from Spanish , and from Berber , ultimately originating in — . The Arabic word masjid literally means a place of prostration...
(Thai - su-rao; or - Thai rendering of masjid; a mosque may also be described as - bot khong Is-a-lam). Thus wat cheen is a Chinese temple (either Buddhist or Taoist
Taoism
Taoism refers to a philosophical or religious tradition in which the basic concept is to establish harmony with the Tao , which is the mechanism of everything that exists...
), wat khaek is a Hindu
Hinduism
Hinduism is the predominant and indigenous religious tradition of the Indian Subcontinent. Hinduism is known to its followers as , amongst many other expressions...
temple, and wat kris or wat krit or wat farang is a Christian
Christianity
Christianity is a monotheistic religion based on the life and teachings of Jesus as presented in canonical gospels and other New Testament writings...
church, though Thai ( bot) may be used descriptively as with mosque.

A typical Buddhist wat consists of the following buildings:
The living quarters of the monks, including the (Thai kuti or kut - monk cells) are separated from the sacred buildings.

The roofs of Thai temples are often adorned with chofah
Chofah
Chofah is a Thai architectural decorative ornament that adorns the top at the end of Wat and palaces roof in most of the continental Southeast Asian countries, such as Thailand, Cambodia, Laos, and Myanmar. It resembles a tall thin bird and looks hornlike...
s.