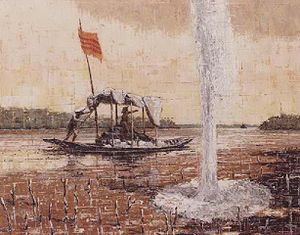 A warning shot is a military term describing harmless artillery
Artillery
Originally applied to any group of infantry primarily armed with projectile weapons, artillery has over time become limited in meaning to refer only to those engines of war that operate by projection of munitions far beyond the range of effect of personal weapons...
shot or gunshot intended to call attention and demand some action of compliance. It is recognised as signalling intended confrontations on land, sea and air.

As an analogy, "warning shot" can be said of any action of declaration, especially a demonstration of power, intended or perceived as a last warning before hostile measures.

During the 18th Century, a warning shot (in nautical terms, often called a shot across the bow
Bow (ship)
The bow is a nautical term that refers to the forward part of the hull of a ship or boat, the point that is most forward when the vessel is underway. Both of the adjectives fore and forward mean towards the bow...
) could be fired towards any ship whose "colours
Ensign
An ensign is a national flag when used at sea, in vexillology, or a distinguishing token, emblem, or badge, such as a symbol of office in heraldry...
" (nationality) had to be ascertained. According to the law of the sea
Admiralty law
Admiralty law is a distinct body of law which governs maritime questions and offenses. It is a body of both domestic law governing maritime activities, and private international law governing the relationships between private entities which operate vessels on the oceans...
, a ship thus hailed had to fly her flag and confirm it with a gunshot. Warning shots may still be used in modern times to signal a vessel to stop or keep off and may be fired from other ships, boats, or aircraft.

Warning shots are also used in military aviation
Military aviation
Military aviation is the use of aircraft and other flying machines for the purposes of conducting or enabling warfare, including national airlift capacity to provide logistical supply to forces stationed in a theater or along a front. Air power includes the national means of conducting such...
, to demand some action of an "enemy" aircraft; the most common demand would be for the aircraft to change course. The ostensible justification for firing shots is that tracer rounds
Tracer ammunition
Tracer ammunition are bullets that are built with a small pyrotechnic charge in their base. Ignited by the burning powder, the phosphorus tail burns very brightly, making the projectile visible to the naked eye...
are very bright and would immediately gain the attention of a crew whose radio is non-functioning, or who might not have noticed radio transmissions. The objective of warning shots is to demonstrate the ability to shoot, and threaten the enemy that they will be shot down if they do not comply.

On the ground, a warning shot from a pistol, rifle, or shotgun is fired into the air or a nearby object, or aimed so that the shot harmlessly passes by the one being warned. This is a sufficiently aggressive act to demand attention and alert onlookers that they might be shot if directions are not followed.
The source of this article is wikipedia, the free encyclopedia.  The text of this article is licensed under the GFDL.