A war grave is a burial place for soldiers or civilians who died during military campaigns or operations. The term does not only apply to graves
Grave (burial)
A grave is a location where a dead body is buried. Graves are usually located in special areas set aside for the purpose of burial, such as graveyards or cemeteries....
: ships sunk during wartime are often considered to be war graves, as are military aircraft that crash into water. Classification of a war grave is not limited to the occupier's death in combat, but includes soldiers who die while in active service: for example, during the Crimean War
Crimean War
The Crimean War was a conflict fought between the Russian Empire and an alliance of the French Empire, the British Empire, the Ottoman Empire, and the Kingdom of Sardinia. The war was part of a long-running contest between the major European powers for influence over territories of the declining...
, more soldiers died of disease than as a result of enemy action.

A common difference between cemeteries
Cemetery
A cemetery is a place in which dead bodies and cremated remains are buried. The term "cemetery" implies that the land is specifically designated as a burying ground. Cemeteries in the Western world are where the final ceremonies of death are observed...
of war graves and those of civilian, peacetime graves is the uniformity of those interred. They generally died during a relatively short period, in a small geographic area and consist of young men often from the few military units involved. 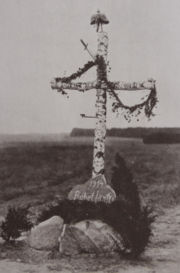 In the United Kingdom
United Kingdom
The United Kingdom of Great Britain and Northern IrelandIn the United Kingdom and Dependencies, other languages have been officially recognised as legitimate autochthonous languages under the European Charter for Regional or Minority Languages...
, 67 ship wrecks and all underwater military aircraft are protected as war graves under the Protection of Military Remains Act 1986
Protection of Military Remains Act 1986
The Protection of Military Remains Act 1986 is an Act of Parliament in the United Kingdom which provides protection for the wreckage of military aircraft and designated military vessels. The Act provides for two types of protection: protected places and controlled sites. Military aircraft are...
which imposes restrictions on their exploration and marine salvage
Marine salvage
Marine salvage is the process of rescuing a ship, its cargo, or other property from peril. Salvage encompasses rescue towing, refloating a sunken or grounded vessel, or patching or repairing a ship...
.

Rupert Brooke
Rupert Brooke
Rupert Chawner Brooke was an English poet known for his idealistic war sonnets written during the First World War, especially The Soldier...
's poem, The Soldier
The Soldier (poem)
"The Soldier" is a poem written by Rupert Brooke. The poem is the fifth of a series of poems entitled 1914.It is often contrasted with Wilfred Owen's 1917 antiwar poem Dulce Et Decorum EstThe manuscript is located at King's College, Cambridge....
- "If I should die, think only this of me: / That there's some corner of a foreign field / That is for ever England", is a patriotic poem about the possibility of dying abroad during a war. Brooke is himself buried in a war grave on Skyros
Skyros
Skyros is an island in Greece, the southernmost of the Sporades, an archipelago in the Aegean Sea. Around the 2nd millennium BC and slightly later, the island was known as The Island of the Magnetes where the Magnetes used to live and later Pelasgia and Dolopia and later Skyros...
in the Aegean Sea
Aegean Sea
The Aegean Sea[p] is an elongated embayment of the Mediterranean Sea located between the southern Balkan and Anatolian peninsulas, i.e., between the mainlands of Greece and Turkey. In the north, it is connected to the Marmara Sea and Black Sea by the Dardanelles and Bosporus...
, having died whilst en route to fight in the Gallipoli Campaign
Battle of Gallipoli
The Gallipoli Campaign, also known as the Dardanelles Campaign or the Battle of Gallipoli, took place at the peninsula of Gallipoli in the Ottoman Empire between 25 April 1915 and 9 January 1916, during the First World War...
.

The British War Memorial Project, founded in 2001, aims to create an archive of names and photographs of all Commonwealth military graves and memorials from 1914 to the present day.