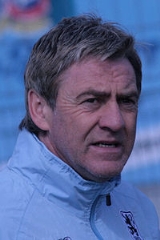 Encyclopedia
Walter "Schoko" Schachner (born 1 February 1957 in Leoben
Leoben
Leoben is a Styrian city in central Austria, located by the Mur river. With a population of about 25,000 it is a local industrial center and hosts the University of Leoben which specialises in mining...
, Austria
Austria
Austria , officially the Republic of Austria , is a landlocked country of roughly 8.4 million people in Central Europe. It is bordered by the Czech Republic and Germany to the north, Slovakia and Hungary to the east, Slovenia and Italy to the south, and Switzerland and Liechtenstein to the...
) is a football
Football (soccer)
Association football, more commonly known as football or soccer, is a sport played between two teams of eleven players with a spherical ball...
manager and former Austrian national player (forward).

As he always brought chocolate to the games when he was a boy, he got the nickname schoko
Chocolate
Chocolate is a raw or processed food produced from the seed of the tropical Theobroma cacao tree. Cacao has been cultivated for at least three millennia in Mexico, Central and South America. Its earliest documented use is around 1100 BC...
. He was one of the most successful Austrian players in Italian football, as he played for 4 clubs over 7 years.

Much-travelled Schachner started his professional career at local outfit Alpine Donawitz
DSV Leoben
DSV Leoben is an Austrian association football club based in Leoben. It was founded in 1928. They play at the Donawitz Stadium.-Current squad:-Famous players: Mugur Gusatu Amir Saadati Rainer Torres Amarildo Zela Bajro Župić...
at 18 in the 1975/1976 season, earning a place in the national team after only one and a half season. He was duly picked up by Vienna giants Austria Wien but moved abroad to play in Italy for seven years, from 1981 to 1988, in A.C. Cesena
A.C. Cesena
Associazione Calcio Cesena is an Italian football club based in Cesena, Romagna. The club was formed in 1940 and won the first promotion to Serie A in 1973. Since then, the club have been in the Italian Premier League for a total of in 11 seasons, reaching the best achievement in 1976 with the 6th...
(58 matches, 17 goals), Torino F.C.
Torino F.C.
Torino Football Club, commonly referred to as simply Torino, is a professional Italian football club based in Turin, Piedmont, that was founded in 1906. The club has spent most of its history in the top tier in Italian football....
(85 matches, 18 goals) and U.S. Avellino
U.S. Avellino
Associazione Sportiva Avellino 1912 , since summer 2010, is the new name of the Italian football club, based in Avellino, Campania. The club was founded in 1912 and its traditional colours are green and white...
(48 matches 13 goals). In 1981 when Cesena was promoted to Serie A, the ultras changed their title to Weisschwarz Brigaden (meaning “Black-and-white Brigades” in German language) to honor the Austrian forward. He returned to Austria in 1988, moving from one club to another and mostly in the second division before finally hanging up his boots at 41 years of age at Eintracht Wels.

On June 21, 1978 at the World Cup held in Argentina he was among starting 11 of the Austrian team that beat the reigning champions, West Germany 3:2 and eliminated them from the competition, a historic match named “The Miracle of Cordoba
Miracle of cordoba
The Miracle of Cordoba describes the game of football between defending World Champions Germany and Austria that occurred on 21 June 1978 at the conclusion of the second round of the 1978 FIFA World Cup, in Córdoba, Argentina...
”.

He started his career as a coach in the season 1999/2000 in FC Zeltweg and led them to promotion from 4th to 3rd division.

In seasons 2000/2001 and 2001/2002 he coached FC Kärnten
FC Kärnten
FC Kärnten was an Austrian association football club based in Klagenfurt, Carinthia. It was founded in 1920 under the name of KSK Klagenfurt. They last played home games at the Sportzentrum Fischl.- History :...
in the Austrian Football First League. Under his leadership the team got promoted to the Austrian Bundesliga and won the National Cup in the first year and the National Supercup in the second.

In the season 2002/2003 Schachner trained Austria Wien in Austrian Bundesliga until he was replaced by Christoph Daum
Christoph Daum
Christoph Daum is a German football coach, currently managing Club Brugge.-Career as a player:Daum began his football career in 1971 in the youth league with Hamborn 07, transferred in 1972 to Eintracht Duisburg and then in 1975 to 1...
in early October despite an excellent start of the season. At the time of his dismissal the team lead the championship with seven points ahead of second place and just defeated Ukrainian Champions Shakhtar Donetsk 5:2 in the UEFA Cup
UEFA Cup
The UEFA Europa League is an annual association football cup competition organised by UEFA since 1971 for eligible European football clubs. It is the second most prestigious European club football contest after the UEFA Champions League...
.
A few days after his dismissal he was hired by Grazer AK
Grazer AK
Grazer AK, founded 18 August 1902 as Grazer Athletik-Sport Klub , is an Austrian sports club, from the city of Graz in the federal state of Styria . The football section is one of the most traditional Austrian clubs, most successful in the decade 1995 – 2005...
, which held the penultimate place in the Austrian Bundesliga. The team finished the season in second place behind Austria Vienna.

In the season 2003/2004 Schachner led Grazer AK to win their first and so far the only national champions title. In the same season they also won the Austrian Cup.
In season 2004/2005 the Grazer AK were runners-up in the Bundesliga and faced Liverpool
Liverpool
Liverpool is a city and metropolitan borough of Merseyside, England, along the eastern side of the Mersey Estuary. It was founded as a borough in 1207 and was granted city status in 1880...
of Rafael Benitez
Rafael Benítez
Rafael "Rafa" Benítez Maudes is a football manager, and former player. He is currently unemployed, after leaving as manager of Internazionale in December 2010....
, the future winners of the title, in the third qualification round of Champions League
UEFA Champions League
The UEFA Champions League, known simply the Champions League and originally known as the European Champion Clubs' Cup or European Cup, is an annual international club football competition organised by the Union of European Football Associations since 1955 for the top football clubs in Europe. It...
, managing to win the return leg at Anfield 1:0, after the home defeat of 0:2.