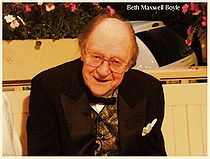 Walter Hendl was an American
United States
The United States of America is a federal constitutional republic comprising fifty states and a federal district...
conductor
Conducting
Conducting is the art of directing a musical performance by way of visible gestures. The primary duties of the conductor are to unify performers, set the tempo, execute clear preparations and beats, and to listen critically and shape the sound of the ensemble...
, composer
Composer
A composer is a person who creates music, either by musical notation or oral tradition, for interpretation and performance, or through direct manipulation of sonic material through electronic media...
and pianist
Pianist
A pianist is a musician who plays the piano. A professional pianist can perform solo pieces, play with an ensemble or orchestra, or accompany one or more singers, solo instrumentalists, or other performers.-Choice of genres:...
.

Hendl was born in West New York, New Jersey
West New York, New Jersey
West New York is a town in Hudson County, New Jersey, United States, situated upon the New Jersey Palisades. As of the 2010 United States Census, the town population was 49,708.-Geography:...
, and later went on to study with Fritz Reiner
Fritz Reiner
Frederick Martin “Fritz” Reiner was a prominent conductor of opera and symphonic music in the twentieth century.-Biography:...
at the Curtis Institute of Music
Curtis Institute of Music
The Curtis Institute of Music is a conservatory in Philadelphia, Pennsylvania, that offers courses of study leading to a performance Diploma, Bachelor of Music, Master of Music in Opera, and Professional Studies Certificate in Opera. According to statistics compiled by U.S...
in Philadelphia. From 1939 to 1941 he taught at Sarah Lawrence College
Sarah Lawrence College
Sarah Lawrence College is a private liberal arts college in the United States, and a leader in progressive education since its founding in 1926. Located just 30 minutes north of Midtown Manhattan in southern Westchester County, New York, in the city of Yonkers, this coeducational college offers...
in New York City. In 1941 and 1942, he was a pianist
Pianist
A pianist is a musician who plays the piano. A professional pianist can perform solo pieces, play with an ensemble or orchestra, or accompany one or more singers, solo instrumentalists, or other performers.-Choice of genres:...
and conductor at the Berkshire Music Center under Serge Koussevitzky
Serge Koussevitzky
Serge Koussevitzky , was a Russian-born Jewish conductor, composer and double-bassist, known for his long tenure as music director of the Boston Symphony Orchestra from 1924 to 1949.-Early career:...
. In 1945, he became associate conductor of the New York Philharmonic
New York Philharmonic
The New York Philharmonic is a symphony orchestra based in New York City in the United States. It is one of the American orchestras commonly referred to as the "Big Five"...
. In 1949, he was appointed music director of the Dallas Symphony Orchestra
Dallas Symphony Orchestra
The Dallas Symphony Orchestra is an American orchestra. It performs its concerts in the Meyerson Symphony Center in the Arts District of downtown Dallas, Texas, United States....
, and he held this position until 1958. In 1953, Hendl became the music director of the Chautauqua Symphony Orchestra
Chautauqua Symphony Orchestra
The Chautauqua Symphony Orchestra is an American orchestra, the resident summer orchestra of the Chautauqua Institution in western New York State. Founded in 1929, the ensemble plays concerts on most Tuesday, Thursday, and Saturday nights throughout the Institution's nine-week season. The CSO...
. He remained with Chautauqua until temporary ill health necessitated his resignation in 1972. He was also active in the Symphony of the Air and conducted its 1955 tour of east Asia
East Asia
East Asia or Eastern Asia is a subregion of Asia that can be defined in either geographical or cultural terms...
.

In 1976 Hendl was appointed music director of the Erie Philharmonic
Erie Philharmonic
The Erie Philharmonic is a professional orchestra located in Erie, Pennsylvania. The Philharmonic has held their performances at the Warner Theatre on State Street in downtown Erie since 1974.-History:...
in Erie, Pennsylvania
Erie, Pennsylvania
Erie is a city located in northwestern Pennsylvania in the United States. Named for the lake and the Native American tribe that resided along its southern shore, Erie is the state's fourth-largest city , with a population of 102,000...
. In 1990, he became professor of conducting at Mercyhurst College
Mercyhurst College
Mercyhurst College is a Catholic liberal arts college in Erie, Pennsylvania, USA.-History:On September 20, 1926, Mercyhurst College opened its doors just a few blocks away from the city's southern boundary. It was founded by the Sisters of Mercy of the Erie Diocese, who were led by Mother M. Borgia...
in Erie. An advocate of contemporary music, he conducted the premieres of Peter Mennin
Peter Mennin
Peter Mennin was an American composer and teacher. He directed the Peabody Conservatory in Baltimore, then for many years ran the Juilliard School, succeeding William Schuman in this role...
's Symphony No. 3 with the New York Philharmonic
New York Philharmonic
The New York Philharmonic is a symphony orchestra based in New York City in the United States. It is one of the American orchestras commonly referred to as the "Big Five"...
Orchestra in 1947, Bohuslav Martinů
Bohuslav Martinu
Bohuslav Martinů was a prolific Czech composer of modern classical music. He was of Czech and Rumanian ancestry. Martinů wrote six symphonies, 15 operas, 14 ballet scores and a large body of orchestral, chamber, vocal and instrumental works. Martinů became a violinist in the Czech Philharmonic...
's Piano Concerto No. 3 with Rudolf Firkušný
Rudolf Firkusny
- Life :Born in Moravian Napajedla, Firkušný started his musical studies with the composers Leoš Janáček and Josef Suk, and the pianist Vilém Kurz. Later he studied with Alfred Cortot and Artur Schnabel. He began performing on the continent of Europe in the 1920s, and made his debuts in London in...
and the Dallas Symphony in 1949, Villa-Lobos
Heitor Villa-Lobos
Heitor Villa-Lobos was a Brazilian composer, described as "the single most significant creative figure in 20th-century Brazilian art music". Villa-Lobos has become the best-known and most significant Latin American composer to date. He wrote numerous orchestral, chamber, instrumental and vocal works...
's Cello Concerto No. 2 with Parisot
Aldo Parisot
Aldo Simoes Parisot is a Brazilian-born American cellist and cello teacher, was formerly a member of the Juilliard School faculty, and currently is serving as a professor of music at the Yale School of Music....
and the New York Philharmonic Orchestra in 1954, and the American premiere of Kabalevsky's Requiem with students of the Eastman School in 1965. He composed incidental music for various stage productions and made several orchestral transcriptions.

His best-selling recordings include violin concerti
Violin concerto
A violin concerto is a concerto for solo violin and instrumental ensemble, customarily orchestra. Such works have been written since the Baroque period, when the solo concerto form was first developed, up through the present day...
featuring Jascha Heifetz
Jascha Heifetz
Jascha Heifetz was a violinist, born in Vilnius, then Russian Empire, now Lithuania. He is widely regarded as one of the greatest violinists of all time.- Early life :...
, Henryk Szeryng
Henryk Szeryng
Henryk Szeryng was a Polish violinist.-Early years:He was born in Żelazowa Wola, Poland on 22 September 1918 into a wealthy family....
, and Erick Friedman
Erick Friedman
Erick Friedman is considered by many as one of the greatest American born violinists of the past century. Erick Friedman's illustrious career took him to many of the great concert stages of the world appearing as guest soloist with most of the great orchestras throughout the United States and...
and piano concerti
Piano concerto
A piano concerto is a concerto written for piano and orchestra.See also harpsichord concerto; some of these works are occasionally played on piano...
featuring Van Cliburn
Van Cliburn
Harvey Lavan "Van" Cliburn Jr. is an American pianist who achieved worldwide recognition in 1958 at age 23, when he won the first quadrennial International Tchaikovsky Piano Competition in Moscow, at the height of the Cold War....
and Gary Graffman
Gary Graffman
Gary Graffman is an American classical pianist, teacher of piano and music administrator.Graffman was born in New York City to Russian-Jewish parents. Having started piano at age 3, Graffman entered the Curtis Institute of Music at age 7 in 1936 as a piano student of Isabelle Vengerova...
.

Hendl died in Harborcreek Township, Pennsylvania
Pennsylvania
The Commonwealth of Pennsylvania is a U.S. state that is located in the Northeastern and Mid-Atlantic regions of the United States. The state borders Delaware and Maryland to the south, West Virginia to the southwest, Ohio to the west, New York and Ontario, Canada, to the north, and New Jersey to...
, after suffering from heart and lung disease.