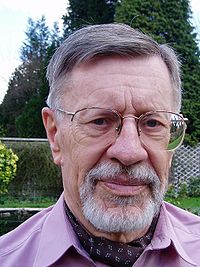 Walter Fiers is a Belgian
Belgium
Belgium , officially the Kingdom of Belgium, is a federal state in Western Europe. It is a founding member of the European Union and hosts the EU's headquarters, and those of several other major international organisations such as NATO.Belgium is also a member of, or affiliated to, many...
molecular biologist.

He obtained a degree of Engineer for Chemistry and Agricultural Industries at the University of Ghent in 1954, and started his research career as an enzymologist
Enzyme
Enzymes are proteins that catalyze chemical reactions. In enzymatic reactions, the molecules at the beginning of the process, called substrates, are converted into different molecules, called products. Almost all chemical reactions in a biological cell need enzymes in order to occur at rates...
in the laboratory of Laurent Vandendriessche in Ghent. In 1956-57, he worked with Heinz Holter in Copenhagen
Copenhagen
Copenhagen is the capital and largest city of Denmark, with an urban population of 1,199,224 and a metropolitan population of 1,930,260 . With the completion of the transnational Øresund Bridge in 2000, Copenhagen has become the centre of the increasingly integrating Øresund Region...
(Denmark
Denmark
Denmark is a Scandinavian country in Northern Europe. The countries of Denmark and Greenland, as well as the Faroe Islands, constitute the Kingdom of Denmark . It is the southernmost of the Nordic countries, southwest of Sweden and south of Norway, and bordered to the south by Germany. Denmark...
). In 1960, he obtained a fellowship from the Rockefeller Foundation
Rockefeller Foundation
The Rockefeller Foundation is a prominent philanthropic organization and private foundation based at 420 Fifth Avenue, New York City. The preeminent institution established by the six-generation Rockefeller family, it was founded by John D. Rockefeller , along with his son John D. Rockefeller, Jr...
and joined the group of Bob Sinsheimer as a postdoc. At the California Institute of Technology
California Institute of Technology
The California Institute of Technology is a private research university located in Pasadena, California, United States. Caltech has six academic divisions with strong emphases on science and engineering...
Walter Fiers was exposed to Molecular Biology
Molecular biology
Molecular biology is the branch of biology that deals with the molecular basis of biological activity. This field overlaps with other areas of biology and chemistry, particularly genetics and biochemistry...
, which was then just developing, studying viral DNA
DNA
Deoxyribonucleic acid is a nucleic acid that contains the genetic instructions used in the development and functioning of all known living organisms . The DNA segments that carry this genetic information are called genes, but other DNA sequences have structural purposes, or are involved in...
. He demonstrated the physical, covalently closed circularity of Bacteriophage
Bacteriophage
A bacteriophage is any one of a number of viruses that infect bacteria. They do this by injecting genetic material, which they carry enclosed in an outer protein capsid...
PhiX-174
Phi-X174 phage
The phi X 174 bacteriophage was the first DNA-based genome to be sequenced. This work was completed by Fred Sanger and his team in 1977. In 1962, Walter Fiers had already demonstrated the physical, covalently closed circularity of phi X 174 DNA.In 2003, it was reported that the whole genome of...
DNA. In 1962, Fiers moved to Madison
Madison, Wisconsin
Madison is the capital of the U.S. state of Wisconsin and the county seat of Dane County. It is also home to the University of Wisconsin–Madison....
, Wisconsin
Wisconsin
Wisconsin is a U.S. state located in the north-central United States and is part of the Midwest. It is bordered by Minnesota to the west, Iowa to the southwest, Illinois to the south, Lake Michigan to the east, Michigan to the northeast, and Lake Superior to the north. Wisconsin's capital is...
, to work in the laboratory of future Nobel laureate, Gobind Khorana.

At the end of 1962, Fiers returned to Belgium and set up the Laboratory of Molecular Biology at the University of Ghent. His research involved Bacteriophage MS2; he was the first to establish the complete nucleotide sequence of a gene (1972) and of a viral genome (bacteriophage MS2
Bacteriophage MS2
The bacteriophage MS2 is an icosahedral, positive-sense single-stranded RNA virus that infects the bacterium Escherichia coli.-History:...
)(1976). In 1978 Fiers and his team were the first to reveal the complete nucleotide-sequence of SV40
SV40
SV40 is an abbreviation for Simian vacuolating virus 40 or Simian virus 40, a polyomavirus that is found in both monkeys and humans...
. The development of totally new procedures and knowledge led to the ability to clone almost any gene and to express these efficiently in bacteria or in other heterologous
Heterologous
In medicine a heterologous transplant means 'between species' or 'from one species to another'.In cell biology and protein biochemistry, heterologous expression means that a protein is experimentally put into a cell that does not normally make that protein...
hosts.

In 1997 Fiers retired and became Professor Emeritus, and the following year he retired from his position as director of the Laboratory of Molecular Biology. Together with Xavier Saelens
Xavier Saelens
Xavier Saelens is a Belgian scientist and currently his main research interest is finding a universal influenza vaccine. He is a Lecturer in Virology and Group Leader of the Molecular Virology Unit at the University of Ghent...
and their team, he continued his research, to find a universal influenza
Influenza
Influenza, commonly referred to as the flu, is an infectious disease caused by RNA viruses of the family Orthomyxoviridae , that affects birds and mammals...
vaccine, based on the M2 protein
M2 protein
The M2 protein is a proton-selective ion channel protein, integral in the viral envelope of the influenza A virus. The channel itself is a homotetramer , where the units are helices stabilized by two disulfide bonds...
on the surface of the influenza A virus. The ectodomain of the M2 protein remains unchanged in all human influenza viruses known, including the strains that caused the pandemic
Pandemic
A pandemic is an epidemic of infectious disease that is spreading through human populations across a large region; for instance multiple continents, or even worldwide. A widespread endemic disease that is stable in terms of how many people are getting sick from it is not a pandemic...
s in the last century, which makes it eligible for a universal influenza A vaccine
.