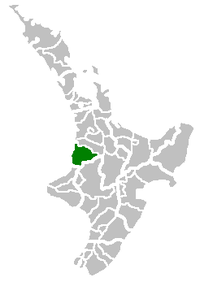 Waitomo District is a territorial authority
Territorial authorities of New Zealand
Territorial authorities are the second tier of local government in New Zealand, below regional councils. There are 67 territorial authorities: 13 city councils, 53 district councils, and the Chatham Islands Council...
in the north of the King Country
King Country
The King Country is a region of the western North Island of New Zealand. It extends approximately from the Kawhia Harbour and the town of Otorohanga in the north to the upper reaches of the Whanganui River in the south, and from the Hauhungaroa and Rangitoto Ranges in the east to near the Tasman...
region in the North Island
North Island
The North Island is one of the two main islands of New Zealand, separated from the much less populous South Island by Cook Strait. The island is in area, making it the world's 14th-largest island...
of New Zealand
New Zealand
New Zealand is an island country in the south-western Pacific Ocean comprising two main landmasses and numerous smaller islands. The country is situated some east of Australia across the Tasman Sea, and roughly south of the Pacific island nations of New Caledonia, Fiji, and Tonga...
. A small part of the district, the town of Tiroa, however, lies in the Manawatu-Wanganui
Manawatu-Wanganui
Manawatu-Wanganui is a region in the lower half of the North Island of New Zealand, around the cities of Palmerston North and Whanganui. It is administered by the Horizons Regional Council.-Administration:...
region.

The district is a rural
Rural
Rural areas or the country or countryside are areas that are not urbanized, though when large areas are described, country towns and smaller cities will be included. They have a low population density, and typically much of the land is devoted to agriculture...
, predominantly dairy
Dairy
A dairy is a business enterprise established for the harvesting of animal milk—mostly from cows or goats, but also from buffalo, sheep, horses or camels —for human consumption. A dairy is typically located on a dedicated dairy farm or section of a multi-purpose farm that is concerned...
farming, region. The seat of the Waitomo District Council is at Te Kuiti
Te Kuiti
Te Kuiti is a small town in the south of the Waikato region of the North Island of New Zealand. It lies at the junction of State Highways 3 and 30 and on the North Island Main Trunk Railway, 80 km south of Hamilton....
, which has a population of 4,419. No other village in the district has a population of over 500. The district's total population at the 2006 census was 9,441, of whom 39% were Māori. The district has a land area of 3546.76 km² (1,369 sq mi), 94.87% of which lies in the Waikato Region and only 5.13% in the Manawatu-Wanganui Region. The Waitomo district was declared in 1976.

The area's main industries include sheep farming, forestry
Forestry
Forestry is the interdisciplinary profession embracing the science, art, and craft of creating, managing, using, and conserving forests and associated resources in a sustainable manner to meet desired goals, needs, and values for human benefit. Forestry is practiced in plantations and natural stands...
, and limestone
Limestone
Limestone is a sedimentary rock composed largely of the minerals calcite and aragonite, which are different crystal forms of calcium carbonate . Many limestones are composed from skeletal fragments of marine organisms such as coral or foraminifera....
quarrying.

The area is known for the popular Karst
KARST
Kilometer-square Area Radio Synthesis Telescope is a Chinese telescope project to which FAST is a forerunner. KARST is a set of large spherical reflectors on karst landforms, which are bowlshaped limestone sinkholes named after the Kras region in Slovenia and Northern Italy. It will consist of...
Waitomo Caves
Waitomo Caves
The Waitomo Caves are a village and cave system forming a major tourist attraction in the southern Waikato region of the North Island of New Zealand, 12 kilometres northwest of Te Kuiti. The community of Waitomo Caves itself is very small, though the village has many temporary service workers...
, 12 kilometres northwest of Te Kuiti. Numerous other cave
Cave
A cave or cavern is a natural underground space large enough for a human to enter. The term applies to natural cavities some part of which is in total darkness. The word cave also includes smaller spaces like rock shelters, sea caves, and grottos.Speleology is the science of exploration and study...
s are found in the limestone rock of the Waitomo district.

Waitomo also has an old style hotel first built in 1908 and added onto in the 1930s. Waitomo Caves Hotel overlooks Waitomo Village.

The current district mayor is Brian Hanna
Brian Hanna
Brian Leslie Hanna is an Australian former cricketer. Originally from Katanning, he played seven and three matches for Western Australia between the 1970–71 and 1972–73 seasons...
, who defeated incumbent Mark Ammon in the local body elections.