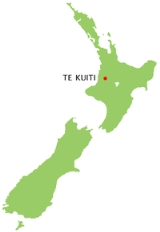 As of the 2001 census
New Zealand Census of Population and Dwellings
The New Zealand government department Statistics New Zealand conducts a census of population and dwellings every five years. The census scheduled for 2011 was cancelled due to circumstances surrounding the February 2011 Christchurch earthquake, however, and legislation introduced to hold the next...
it had a resident population of 4,374, a decrease of 5.1% since 1991. The town promotes itself as the sheep shearing
Sheep shearing
Sheep shearing, shearing or clipping is the process by which the woollen fleece of a sheep is cut off. The person who removes the sheep's wool is called a shearer. Typically each adult sheep is shorn once each year...
capital of the world and is host to the annual New Zealand National Shearing Championships.

Te Kuiti is approximately 80 km south of Hamilton
Hamilton, New Zealand
Hamilton is the centre of New Zealand's fourth largest urban area, and Hamilton City is the country's fourth largest territorial authority. Hamilton is in the Waikato Region of the North Island, approximately south of Auckland...
and 19 km south-east of Waitomo. The area around Te Kuiti, commonly known as the King Country
King Country
The King Country is a region of the western North Island of New Zealand. It extends approximately from the Kawhia Harbour and the town of Otorohanga in the north to the upper reaches of the Whanganui River in the south, and from the Hauhungaroa and Rangitoto Ranges in the east to near the Tasman...
, gives its name to the Heartland Championship
National Provincial Championship
The National Provincial Championship, or NPC, is the major domestic rugby competition in New Zealand. The NPC has seen many alterations to its format and brand. Since 2006 the National Championship has been split into 2 competitions, the ITM Cup and the Heartland Championship...
rugby
Rugby union
Rugby union, often simply referred to as rugby, is a full contact team sport which originated in England in the early 19th century. One of the two codes of rugby football, it is based on running with the ball in hand...
team based in Te Kuiti.

Te Kuiti is the Maori name given to the area. In its original form of "Te Kuititanga", it literally means "the valley", "the squeezing in" or "the narrowing".

The "Shearing Capital of the World" contains the world's largest shearer, seven metres high. On 1 April 2006 the largest sheep show in the world took place here, with more than 2000 sheep. 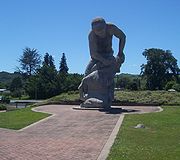 The carved Te Tokanganui-A-Noho Meeting House was gifted to the local Maori people (Ngāti Maniapoto
Ngati Maniapoto
Ngāti Maniapoto is an iwi based in the Waikato-Waitomo region of New Zealand's North Island. It is part of the Tainui confederation, the members of which trace their whakapapa back to people who arrived in New Zealand on the waka Tainui...
) by Te Kooti
Te Kooti
Te Kooti Arikirangi Te Turuki was a Māori leader, the founder of the Ringatu religion and guerrilla.While fighting alongside government forces against the Hauhau in 1865, he was accused of spying. Exiled to the Chatham Islands without trial along with captured Hauhau, he experienced visions and...
, a famous Maori leader.

The Tatsuno Japanese Garden is at the southern end of the main street.

The Mangokewa reserve located 5km south of Te Kuiti and is a popular attraction for rock climbers, hikers, picnic goers, swimmers and trout fisherman in the region.

Limestone deposits and water have created the Waitomo Caves
Waitomo Caves
The Waitomo Caves are a village and cave system forming a major tourist attraction in the southern Waikato region of the North Island of New Zealand, 12 kilometres northwest of Te Kuiti. The community of Waitomo Caves itself is very small, though the village has many temporary service workers...
, northwest of the town, one of New Zealand's most-visited tourist locations. The town itself is located in a valley with many rich limestone deposits. The Mangaokewa stream runs through the valley and is a tributary of the Waipa river.
Te Kuiti's hinterland consist mainly of farmland and limestone quarrys. The land surrounding Te Kuiti has steep hilly relief which reflects the nature of the North King Country region.
The climate of Te Kuiti is wet during the winter and dry during the late summer with an average of 1,450mm of rainfall each year. http://www.ew.govt.nz/riverlevelsandrainfall/cgi-bin/hydwebserver.cgi/points/details?point=21&catchment=16

Te Kuiti Albion FC play in the Deacon Shield tournament. They play their home games at Centennial Park where there is a small clubroom. The club colours are yellow and black striped shirts and black shorts.

Te Kuiti is home of home of the Waitete Rugby Football Club.