Encyclopedia
Wadi Rum also known as The Valley of the Moon is a valley cut into the sandstone and granite rock in south Jordan
Jordan
Jordan , officially the Hashemite Kingdom of Jordan , Al-Mamlaka al-Urduniyya al-Hashemiyya) is a kingdom on the East Bank of the River Jordan. The country borders Saudi Arabia to the east and south-east, Iraq to the north-east, Syria to the north and the West Bank and Israel to the west, sharing...
at 60 km (37.3 mi) to the east of Aqaba
Aqaba
Aqaba is a coastal city in the far south of Jordan, the capital of Aqaba Governorate at the head of the Gulf of Aqaba. Aqaba is strategically important to Jordan as it is the country's only seaport. Aqaba is best known today as a diving and beach resort, but industrial activity remains important...
. It is the largest wadi
Wadi
Wadi is the Arabic term traditionally referring to a valley. In some cases, it may refer to a dry riverbed that contains water only during times of heavy rain or simply an intermittent stream.-Variant names:...
in Jordan. The name Rum most likely comes from an Aramaic
Aramaic language
Aramaic is a group of languages belonging to the Afroasiatic language phylum. The name of the language is based on the name of Aram, an ancient region in central Syria. Within this family, Aramaic belongs to the Semitic family, and more specifically, is a part of the Northwest Semitic subfamily,...
root meaning 'high' or 'elevated'. To reflect its proper Arabic pronunciation, archaeologists transcribe it as Wadi Ramm. The highest elevation in Wadi Rum is Mount Um Dami at more than 1800 m (5,905.5 ft) above sea level.

Wadi Rum has been inhabited by many human cultures since prehistoric times, with many cultures–including the Nabateans–leaving their mark in the form of rock paintings, graffiti, and temples. , several Bedouin
Bedouin
The Bedouin are a part of a predominantly desert-dwelling Arab ethnic group traditionally divided into tribes or clans, known in Arabic as ..-Etymology:...
tribes inhabit Rum and the surrounding area.

In the West, Wadi Rum may be best known for its connection with British officer T. E. Lawrence
T. E. Lawrence
Lieutenant Colonel Thomas Edward Lawrence, CB, DSO , known professionally as T. E. Lawrence, was a British Army officer renowned especially for his liaison role during the Arab Revolt against Ottoman Turkish rule of 1916–18...
, who based his operations here during the Arab Revolt
Arab Revolt
The Arab Revolt was initiated by the Sherif Hussein bin Ali with the aim of securing independence from the ruling Ottoman Turks and creating a single unified Arab state spanning from Aleppo in Syria to Aden in Yemen.- Background :...
of 1917–18. In the 1980s one of the rock formations in Wadi Rum was named "The Seven Pillars of Wisdom" in memory of Lawrence's book penned in the aftermath of the war, though the 'Seven Pillars' referred to in the book actually have no connection with Rum.

The area centred on Wadi Rum (the main valley) is home to the Zalabia Bedouin who, working with climbers and trekkers, have made a success of developing eco-adventure tourism, now their main source of income. The area around Disi to the NE, home to the Zuweida Bedouin and erroneously also thought to be part of Wadi Rum by visitors, caters more for Jordanian visitors from Amman, with campsites regularly used by party-goers.

Khaz'ali Canyon in Wadi Rum is the site of petroglyphs etched into the cave walls depicting humans and antelopes dating back to the Thamudic
Thamudic
Thamudic is an Old North Arabian dialect known from pre-Islamic inscriptions scattered across the Arabian desert and the Sinai. Dating to between the 4th century BC and the 3rd or 4th century AD, they were incorrectly named after the Thamud people, with whom they are not directly...
times. 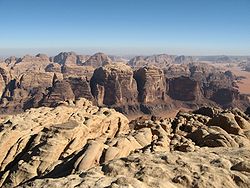 The area is now also one of Jordan's important tourist destinations, and attracts an increasing number of foreign tourists, particularly trekkers and climbers, but also for camel and horse safari or simply day-trippers from Aqaba or Petra. In contrast, there are almost no local or Arab tourists though nearby Disi (not actually part of Rum) attracts young people from Amman at weekends. Popular activities in the desert environment include camping under the stars, riding Arab horses, hiking and rock-climbing
Climbing
Climbing is the activity of using one's hands and feet to ascend a steep object. It is done both for recreation and professionally, as part of activities such as maintenance of a structure, or military operations.Climbing activities include:* Bouldering: Ascending boulders or small...
amongst the massive rock formations. Jabal Rum (1734 metres (5,689 ft) above sea level) is the second highest peak in Jordan and the highest peak in the central Rum, covered with snow and rising directly above Rum valley opposite Jebel um Ishrin, which is possibly one metre lower. The highest peak in Jordan is south of Rum close to the Saudi border. Named Jebel um Adaami it is 1840 m (6,036.7 ft) high and was first located by Difallah Ateeg, a Zalabia Bedouin from Rum. On a clear day, it is possible to see the Red Sea and the Saudi border from the top. It is now a very popular trek from Rum village.

The influx of tourists to this once isolated area has substantially increased the financial fortunes of the Bedouin people, and it is not uncommon to see locals using mobile phones and driving expensive four-wheel drive vehicles; many also have wi-fi and computers to run their adventure tourism businesses.

The village of Wadi Rum consists of several hundred Bedouin inhabitants with their goat-hair tents and concrete houses and also their four wheel vehicles, one school for boys and one for girls, a few shops, and the headquarters of the Desert Patrol.

The area has been used as a background setting in a number of films: