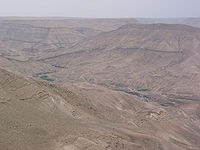 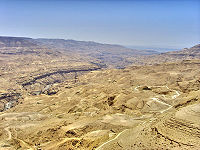 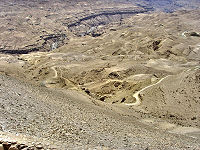 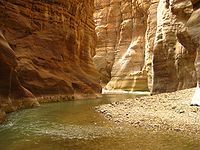 Wadi Mujib is a gorge in Jordan
Jordan
Jordan , officially the Hashemite Kingdom of Jordan , Al-Mamlaka al-Urduniyya al-Hashemiyya) is a kingdom on the East Bank of the River Jordan. The country borders Saudi Arabia to the east and south-east, Iraq to the north-east, Syria to the north and the West Bank and Israel to the west, sharing...
which enters the Dead Sea
Dead Sea
The Dead Sea , also called the Salt Sea, is a salt lake bordering Jordan to the east and Israel and the West Bank to the west. Its surface and shores are below sea level, the lowest elevation on the Earth's surface. The Dead Sea is deep, the deepest hypersaline lake in the world...
at 410 meters below sea level.
The Mujib Reserve of Wadi Mujib is the lowest nature reserve in the world, located in the mountainous landscape to the east of the Dead Sea, approximately 90 km south of Amman
Amman
Amman is the capital of Jordan. It is the country's political, cultural and commercial centre and one of the oldest continuously inhabited cities in the world. The Greater Amman area has a population of 2,842,629 as of 2010. The population of Amman is expected to jump from 2.8 million to almost...
. The 220 square kilometers reserve was created in 1987 by the Royal Society for the Conservation of Nature
Royal Society for the Conservation of Nature
The Royal Society for The Conservation of Nature is an independent voluntary organization devoted to the conservation of Jordan's natural resources established in 1966 under the patronage of Her Majesty Queen Noor with the late King Hussein as Honorary President.RSCN has the mission of protecting...
and is regionally and internationally important, particularly for the bird life that the reserve supports. It extends to the Kerak
Kerak
Kerak Castle is a large crusader castle located in Kerak in Jordan. It is one of the largest crusader castles in the Levant.Construction of the castle began in the 1140s, under Pagan, the butler of Fulk of Jerusalem. The Crusaders called it Crac des Moabites or "Karak in Moab", as it is frequently...
and Madaba
Madaba
Madaba , is the capital city of Madaba Governorate of Jordan, which has a population of about 60,000. Madaba is the fifth most populous town in Jordan. It is best known for its Byzantine and Umayyad mosaics, especially a large Byzantine-era mosaic map of The Holy Land...
mountains to the north and south, reaching 900 meters above sea level in some places. This 1,300 meter variation in elevation, combined with the valley's year round water flow from seven tributaries, means that Wadi Mujib enjoys a magnificent biodiversity that is still being explored and documented today.
Over 300 species of plants, 10 species of carnivores and numerous species of permanent and migratory birds have been recorded until this date. Some of the remote mountain and valley areas are difficult to reach, and thus offer safe havens for rare species of cats, goats and other mountain animals.

During the last Ice Age the water level of the Dead Sea
Dead Sea
The Dead Sea , also called the Salt Sea, is a salt lake bordering Jordan to the east and Israel and the West Bank to the west. Its surface and shores are below sea level, the lowest elevation on the Earth's surface. The Dead Sea is deep, the deepest hypersaline lake in the world...
reached 180 m below sea level, about 230 m higher than it is today. It flooded the lower areas of the canyons along its banks, which became bays and begun to accumulate sediments. As the climatic conditions changed, about 20,000 years ago, the water level of the lake dropped, leaving the re-emergent canyons blocked with lake marl
Marl
Marl or marlstone is a calcium carbonate or lime-rich mud or mudstone which contains variable amounts of clays and aragonite. Marl was originally an old term loosely applied to a variety of materials, most of which occur as loose, earthy deposits consisting chiefly of an intimate mixture of clay...
.
Most canyons managed to cut through their plugged outlets and to resume their lower courses. However, Wadi Mujib, the biblical Arnon River, abandoned its former outlet by breaking through a cleft in the sandstone. This narrow cleft became the bottleneck of an enormously large drainage basin with a huge discharge. During the years the cleft was scoured deeper and the gorge of Wadi Mujib was formed.

The Mujib reserve consists of mountainous, rocky, and sparsely vegetated desert (up to 800 m), with cliffs, gorges and deep wadis cutting through plateaus. Perennial, spring-fed streams flow down the wadis to the shores of the Dead Sea
Dead Sea
The Dead Sea , also called the Salt Sea, is a salt lake bordering Jordan to the east and Israel and the West Bank to the west. Its surface and shores are below sea level, the lowest elevation on the Earth's surface. The Dead Sea is deep, the deepest hypersaline lake in the world...
which lies 400 m below sea-level.

The slopes of the mountaineous land are very sparsely vegetated, with a steppe
Steppe
In physical geography, steppe is an ecoregion, in the montane grasslands and shrublands and temperate grasslands, savannas, and shrublands biomes, characterized by grassland plains without trees apart from those near rivers and lakes...
-type vegetation on plateaus. Groundwater seepage does occur in places along the Dead Sea shore, for example at the hot spring
Hot spring
A hot spring is a spring that is produced by the emergence of geothermally heated groundwater from the Earth's crust. There are geothermal hot springs in many locations all over the crust of the earth.-Definitions:...
s of Zara, which support a luxuriant thicket of Acacia
Acacia
Acacia is a genus of shrubs and trees belonging to the subfamily Mimosoideae of the family Fabaceae, first described in Africa by the Swedish botanist Carl Linnaeus in 1773. Many non-Australian species tend to be thorny, whereas the majority of Australian acacias are not...
, Tamarix
Tamarix
The genus Tamarix is composed of about 50-60 species of flowering plants in the family Tamaricaceae, native to drier areas of Eurasia and Africa...
, Phoenix
Phoenix (plant)
Phoenix is a genus of 14 species of palms, native from the Canary Islands east across northern and central Africa, the extreme southeast of Europe , and southern Asia from Turkey east to southern China and Malaysia. The diverse habitats they occupy include swamps, deserts, and mangrove sea coasts...
and Nerium, and a small marsh. The less severe slopes of the reserve are used by pastoralists for the grazing of sheep and goats.

The hot springs of Hammamat Ma'in
Ma'in Hot Springs
Ma'in Hot Springs is a hot freshwater mineral spring and waterfall that lies below sea level. The springs, located on the edge of Wadi Mujib, feed the Dead Sea. The water contains large amounts of hydrogen sulfide....
lie close to the borders of the reserve are heavily used for tourism/recreation.

The Jordanian military have a temporary camp in the south of the reserve.

A large dam was recently finished at the bottom of the wadi, where the modern road crosses the river. As a result, a large lake has formed. Today, Wadi Mujib is fed by seven tributaries.


Bird and Animal Life in Mujib

As well as resident birds, the reserve is strategically important as a safe stop-over for the huge number of birds which fly annually along the rift valley between Africa & northeast Europe.
It is possible to see the following birds in Mujib:


Many carnivores also inhabit the various vegetation zones in Mujib, such as the Caracal
Caracal
The caracal is a fiercely territorial medium-sized cat ranging over Western Asia, South Asia and Africa.The word caracal comes from the Turkish word "karakulak", meaning "black ear". In North India and Pakistan, the caracal is locally known as syahgosh or shyahgosh, which is a Persian term...
cat, striped hyena
Hyena
Hyenas or Hyaenas are the animals of the family Hyaenidae of suborder feliforms of the Carnivora. It is the fourth smallest biological family in the Carnivora , and one of the smallest in the mammalia...
and the Syrian wolf. One of the most important animals in Mujib is the Nubian ibex, a large mountain goat which became threatened as a result of over-hunting.