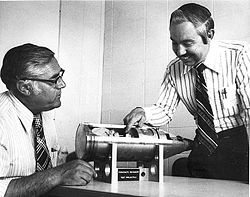 The W48 was an American nuclear artillery
Nuclear artillery
Nuclear artillery is a subset of limited-yield tactical nuclear weapons, in particular those weapons that are launched from the ground at battlefield targets...
shell, fired from a standard 155 mm (6.1 inch) howitzer
Howitzer
A howitzer is a type of artillery piece characterized by a relatively short barrel and the use of comparatively small propellant charges to propel projectiles at relatively high trajectories, with a steep angle of descent...
e.g. the M114
M114 155 mm howitzer
The M114 155 mm howitzer was a towed howitzer used by the United States Army. It was first produced in 1942 as a medium artillery piece under the designation of 155 mm Howitzer M1. It saw service with the US Army during World War II, the Korean War, and the Vietnam War, before being...
or M198
M198 howitzer
The M198 howitzer is a medium-sized, towed artillery piece, developed for service with the United States Army and Marine Corps. It was commissioned to be a lightweight replacement for the WWII era M114 155mm howitzer. It was designed and prototyped at the Rock Island Arsenal in 1969 with firing...
. It was manufactured starting in 1963, and all units were retired in 1992.

Linear implosion uses a mass of nuclear material which is more than one critical mass at normal pressure and a spherical configuration. The mass, known as the "pit", is configured in a lower density non-spherical configuration prior to firing the weapon, and then small to moderate amounts of explosive collapse and slightly reshape the nuclear material into a supercritical mass which then begins chain reaction, goes critical, and then expands in a small nuclear blast. Three methods are known to compress and reshape the nuclear material: collapsing hollow spaces inside the nuclear material, using plutonium-gallium alloy
Plutonium-gallium alloy
Plutonium-gallium alloy is an alloy of plutonium and gallium, used in nuclear weapon pits – the component of a nuclear weapon where the fission chain reaction is started....
which is stabilized in the low density delta phase at a density of 16.4 (and which collapses to denser alpha-phase under moderate explosive compression), and shaping an explosive and nuclear material so that the explosive pressure changes a stretched-out, elliptical or football shape to collapse towards a spherical or more spherical end shape.

A bare critical mass of plutonium
Plutonium
Plutonium is a transuranic radioactive chemical element with the chemical symbol Pu and atomic number 94. It is an actinide metal of silvery-gray appearance that tarnishes when exposed to air, forming a dull coating when oxidized. The element normally exhibits six allotropes and four oxidation...
at normal density and without additional neutron reflector
Neutron reflector
A neutron reflector is any material that reflects neutrons. This refers to elastic scattering rather than to a specular reflection. The material may be graphite, beryllium, steel, and tungsten carbide, or other materials...
material is roughly 10 kilograms. To achieve a large explosive yield, a linear implosion weapon needs somewhat more material, about 13 kilograms. 13 kilograms of (highest density) alpha-phase plutonium at a density of 19.8 g/cm³ is 657 cm³, a sphere of radius 5.4 cm (diameter 10.8 cm / 4.25 inches).

Linear implosion weapons could use tampers or reflectors, but the overall diameter of the fissile material plus tamper/reflector increases compared to the volume required for an untamped unreflected pit. To fit weapons into small artillery shells (155 mm and 152 mm are known; 105 mm has been alleged to be possible by nuclear weapon designer Ted Taylor), bare pits may be required.

Linear implosion weapons have much lower efficiency due to low pressure, and require 2-3 times more nuclear material than conventional implosion weapons. They are also considerably heavier, and much smaller than conventional implosion weapons. The W54
W54
The W54 was the smallest nuclear warhead deployed by the United States. It was a very compact implosion-type nuclear weapon design, designed for tactical use and had a very low yield for a nuclear weapon.- Development :...
nuclear warhead used for special purposes and the Davy Crockett
Davy Crockett (nuclear device)
The M-28 or M-29 Davy Crockett Weapon System was a tactical nuclear recoilless gun for firing the M388 nuclear projectile that was deployed by the United States during the Cold War...
nuclear artillery unit was about 11 inches diameter and weighs 51 pounds. The W48 is 6 inches in diameter and weighs over twice as much, and probably requires twice as much plutonium. Independent researchers have determined that one model of US conventional implosion fission weapon cost $1.25 million per unit produced, of which $0.25 million was the total cost for all non nuclear components and $1 million the cost of the plutonium. Linear implosion weapons, requiring 2-3 times more plutonium, are proportionally more expensive.