Encyclopedia
Vyacheslav Konstantinovich Oltarzhevsky was a Russia
Russia
Russia or , officially known as both Russia and the Russian Federation , is a country in northern Eurasia. It is a federal semi-presidential republic, comprising 83 federal subjects...
n Soviet architect. He was one of the first Soviet experts in skyscraper
Skyscraper
A skyscraper is a tall, continuously habitable building of many stories, often designed for office and commercial use. There is no official definition or height above which a building may be classified as a skyscraper...
construction, notable for his collaboration with Arkady Mordvinov
Arkady Mordvinov
Arkady Grigoryevich Mordvinov was a Soviet architect and construction manager, notable for Stalinist architecture of Tverskaya Street, Leninsky Avenue, Hotel Ukraina skyscraper in Moscow and his administrative role in Soviet construction industry and architecture.-VOPRA years:Mordvinov was born in...
on Hotel Ukraina
Hotel Ukraina
Hotel Ukraina may refer to:* Hotel Ukraina - the tallest hotel in Europe, and of the Seven Sisters in Moscow* Hotel Ukrayina - a hotel in Kiev...
(Moscow). Oltarzhevsky, one of the few architects hit by the Great Purge
Great Purge
The Great Purge was a series of campaigns of political repression and persecution in the Soviet Union orchestrated by Joseph Stalin from 1936 to 1938...
in 1938, survived it and returned to active practice in 1940s.

Vyacheslav Oltarzhevsky was born in a family of a government official in Moscow. He studied architecture at Moscow School of Painting, Sculpture and Architecture
Moscow School of Painting, Sculpture and Architecture
The Moscow School of Painting, Sculpture and Architecture was one of the largest educational institutions in Russia. The school was formed by the 1865 merger of a private art college, established in Moscow in 1832, and the Palace School of Architecture, established in 1749 by Dmitry Ukhtomsky. By...
(1901–1908) and in Vienna
Vienna
Vienna is the capital and largest city of the Republic of Austria and one of the nine states of Austria. Vienna is Austria's primary city, with a population of about 1.723 million , and is by far the largest city in Austria, as well as its cultural, economic, and political centre...
under Otto Wagner
Otto Wagner
Otto Koloman Wagner was an Austrian architect and urban planner, known for his lasting impact on the appearance of his home town Vienna, to which he contributed many landmarks.-Life:...
(1905). He assisted older architects Ivan Rerberg
Ivan Rerberg
Ivan Ivanovich Rerberg was a Russian civil engineer, architect and educator active in Moscow in 1897–1932. Rerberg's input to present-day Moscow include Kiyevsky Rail Terminal, Central Telegraph building and the Administration building of Moscow Kremlin...
, Illarion Ivanov-Shitz and Marian Peretyatkovich
Marian Peretyatkovich
Marian Marianovich Peretyatkovich was a Ukrainian-born Russian architect. His premature death at the age of 43 limited his career to only eight years of independent practice , however, he managed to excel in a rational variety of late Art Nouveau, Renaissance Revival and Russian Revival in Saint...
, and completed his first independent commission in 1909. His most visible building before World War I
World War I
World War I , which was predominantly called the World War or the Great War from its occurrence until 1939, and the First World War or World War I thereafter, was a major war centred in Europe that began on 28 July 1914 and lasted until 11 November 1918...
was the Northern Insurance in Kitai-gorod
Kitai-gorod
Kitay-gorod , earlier also known as Great Posad , is a business district within Moscow, Russia, encircled by mostly-reconstructed medieval walls. It is separated from the Moscow Kremlin by Red Square. It does not constitute a district , as there are no resident voters, thus, municipal elections...
(shared with Rerberg and Peretyatkovich).

In 1924-1934, Oltarzhevsky lived in United States
United States
The United States of America is a federal constitutional republic comprising fifty states and a federal district...
with an official mission to study and evaluate modern construction technology, becoming the leading Soviet expert in highrise steel frame construction. 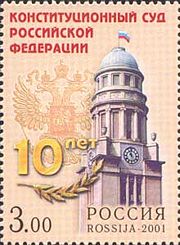 In 1935, Oltarzhevsky was appointed to be the chief architect of All-Russia Exhibition Centre
All-Russia Exhibition Centre
All-Russia Exhibition Centre is a permanent general-purpose trade show in Moscow, Russia....
; in April, 1936 his master plan was officially approved. By 1938, Oltarzhevsky completed most of this plan, notably the Mechanisatsia stepped tower, a predecessor of late stalinist architecture
Stalinist architecture
Stalinist architecture , also referred to as Stalinist Gothic, or Socialist Classicism, is a term given to architecture of the Soviet Union between 1933, when Boris Iofan's draft for Palace of the Soviets was officially approved, and 1955, when Nikita Khrushchev condemned "excesses" of the past...
towers. The fall of Commissar for Agriculture, Mikhail Chernov
Mikhail Chernov
Mikhail Chernov is a Russian professional ice hockey defenceman currently playing for HC Sibir Novosibirsk of the Kontinental Hockey League....
, arrested in 1938 for Bukharin
Nikolai Bukharin
Nikolai Ivanovich Bukharin , was a Russian Marxist, Bolshevik revolutionary, and Soviet politician. He was a member of the Politburo and Central Committee , chairman of the Communist International , and the editor in chief of Pravda , the journal Bolshevik , Izvestia , and the Great Soviet...
conspiracy, caused a domino effect in the Commissariat for Agriculture which supervised the Exhibition. Oltarzhevsky was arrested, too, but spared from death penalty and served his term in Vorkuta
Vorkuta
Vorkuta is a coal-mining town in the Komi Republic, Russia, situated just north of the Arctic Circle in the Pechora coal basin at the Usa River. Population: - Labor camp origins :...
, as a town architect, until 1943. Meanwhile, his work at the Exhibition was branded alien art; some of his buildings were torn down and rebuilt from scratch.

After World War II
World War II
World War II, or the Second World War , was a global conflict lasting from 1939 to 1945, involving most of the world's nations—including all of the great powers—eventually forming two opposing military alliances: the Allies and the Axis...
, Oltarzhevsky was assigned to the Moscow Skyscraper Project
Seven Sisters (Moscow)
The "Seven Sisters" is the English name given to a group of Moscow skyscrapers designed in the Stalinist style. Muscovites call them Vysotki or Stalinskie Vysotki , " high-rises"...
. His own plans were discarded, because all jobs were awarded in advance to most influential Soviet architects. Oltarzhevsky joined Arkady Mordvinov
Arkady Mordvinov
Arkady Grigoryevich Mordvinov was a Soviet architect and construction manager, notable for Stalinist architecture of Tverskaya Street, Leninsky Avenue, Hotel Ukraina skyscraper in Moscow and his administrative role in Soviet construction industry and architecture.-VOPRA years:Mordvinov was born in...
on his Hotel Ukraina
Hotel Ukraina
Hotel Ukraina may refer to:* Hotel Ukraina - the tallest hotel in Europe, and of the Seven Sisters in Moscow* Hotel Ukrayina - a hotel in Kiev...
skyscraper in Dorogomilovo District
Dorogomilovo District
Dorogomilovo District is a district in Western Administrative Okrug of Moscow, Russia. The district, adjacent to Presnensky, Arbat, and Khamovniki Districts of Central Administrative Okrug, contains a prestigious five-kilometer strip of land along Kutuzovsky Prospekt, Victory Park, and Kiyevsky...
; both architects were awarded Stalin Prize in 1948 for conceptual drafts, before actual construction began.