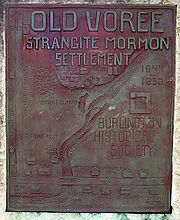 Voree is an unincorporated community
Unincorporated area
In law, an unincorporated area is a region of land that is not a part of any municipality.To "incorporate" in this context means to form a municipal corporation, a city, town, or village with its own government. An unincorporated community is usually not subject to or taxed by a municipal government...
on the outskirts of present-day Burlington
Burlington, Wisconsin
Burlington is a city in Racine and Walworth counties in the U.S. state of Wisconsin, with the majority of the city located in Racine County. The population was 10,421 at the 2009 census.-History:...
, in Walworth County
Walworth County, Wisconsin
Walworth County is a county located in the U.S. state of Wisconsin. As of 2010, the population was 102,228. Its county seat is Elkhorn.-Geography:According to the U.S...
, Wisconsin
Wisconsin
Wisconsin is a U.S. state located in the north-central United States and is part of the Midwest. It is bordered by Minnesota to the west, Iowa to the southwest, Illinois to the south, Lake Michigan to the east, Michigan to the northeast, and Lake Superior to the north. Wisconsin's capital is...
, United States
United States
The United States of America is a federal constitutional republic comprising fifty states and a federal district...
, in the town limits of Spring Prairie
Spring Prairie, Wisconsin
Spring Prairie is a town in Walworth County, Wisconsin, United States. The population was 2,089 at the 2000 census. The unincorporated communities of Honey Creek, and Voree are located in Spring Prairie.-Geography:...
. It is best known as the historic and current headquarters of the Church of Jesus Christ of Latter Day Saints (Strangite)
Church of Jesus Christ of Latter Day Saints (Strangite)
The Church of Jesus Christ of Latter Day Saints is a denomination of the Latter Day Saint movement with around three hundred members as of 1998...
, a denomination of the Latter Day Saint
Latter Day Saint movement
The Latter Day Saint movement is a group of independent churches tracing their origin to a Christian primitivist movement founded by Joseph Smith, Jr. in the late 1820s. Collectively, these churches have over 14 million members...
(Mormon) movement. According to James Strang
James Strang
James Jesse Strang was an American religious leader, politician and self-proclaimed monarch who founded the Church of Jesus Christ of Latter Day Saints , a faction of the Latter Day Saint movement...
, founder of the Strangite church and of the town, the name means "Garden of Peace." The community is situated along former Wisconsin Highway 11
Highway 11 (Wisconsin)
State Trunk Highway 11 is a state highway running east–west across southern Wisconsin. The highway connects Dubuque, Iowa with the cities of Janesville, Racine and Elkhorn...
just west of the Racine County line.

Although the Voree area was inhabited by Native American
Native Americans in the United States
Native Americans in the United States are the indigenous peoples in North America within the boundaries of the present-day continental United States, parts of Alaska, and the island state of Hawaii. They are composed of numerous, distinct tribes, states, and ethnic groups, many of which survive as...
s prior to the arrival of the first Caucasians
White people
White people is a term which usually refers to human beings characterized, at least in part, by the light pigmentation of their skin...
, the most notable part of its history begins in 1844, after the death of Joseph Smith Jr., founder of the Latter Day Saint movement. James J. Strang, who had declared himself Smith's successor, established Voree as a "gathering place" for those Latter Day Saints who chose to follow his leadership rather than that of Brigham Young
Brigham Young
Brigham Young was an American leader in the Latter Day Saint movement and a settler of the Western United States. He was the President of The Church of Jesus Christ of Latter-day Saints from 1847 until his death in 1877, he founded Salt Lake City, and he served as the first governor of the Utah...
or other claimnants. Strang's followers moved from Nauvoo, Illinois
Nauvoo, Illinois
Nauvoo is a small city in Hancock County, Illinois, United States. Although the population was just 1,063 at the 2000 census, and despite being difficult to reach due to its location in a remote corner of Illinois, Nauvoo attracts large numbers of visitors for its historic importance and its...
and other places to Voree. Young's followers relocated to the Salt Lake Valley
Salt Lake Valley
Salt Lake Valley is a valley in Salt Lake County in the north-central portion of the U.S. state of Utah. It contains Salt Lake City and many of its suburbs, notably West Valley City, Murray, Sandy, and West Jordan; its total population is 1,029,655 as of 2010...
in what would ultimately become the Utah Territory
Utah Territory
The Territory of Utah was an organized incorporated territory of the United States that existed from September 9, 1850, until January 4, 1896, when the final extent of the territory was admitted to the Union as the State of Utah....
, where they established The Church of Jesus Christ of Latter-day Saints, which is now the largest "Mormon" denomination. Strang's and Young's organizations each claim to be the sole legal continuance of Joseph Smith's church, and each rejects all claims to legitimacy of the other.

The "Strangite" church established a quarry and built many fine stone houses, several of which survive. Their community included a blacksmith shop, tavern, school and a tithing house. The church excavated a foundation for their intended temple, but were unable to finish it due to poverty and internal dissent. They also published the Voree Herald and Zion's Reveille in the town. Tombstone carving, plough manufacturing, and the raising of English Fox Terrier
Fox Terrier
Fox Terrier refers primarily to two different breeds of the terrier dog type: the Smooth Fox Terrier and the Wire Fox Terrier. Both of these breeds originated in the 19th century from a handful of dogs who are descended from earlier varieties of British terriers, and are related to other modern...
s were some of Voree's business enterprises.

A small hill in Voree, known as the "Hill of Promise", became noteworthy as the location where James Strang allegedly unearthed the Voree Plates
Voree Plates
The Voree Plates, sometimes called The Record of Rajah Manchou of Vorito, or the Voree Record, were a set of three tiny metal plates allegedly discovered by James J. Strang in 1845 in Voree, near Burlington, Wisconsin...
. These three small metal plates, purportedly containing the ancient record of "Rajah Manchou of Vorito" (alleged to be an ancient inhabitant of the area), became a scripture of Strang's church and is still accepted by his followers today. Baptisms for the Dead
Baptism for the dead
Baptism for the dead, vicarious baptism or proxy baptism is the religious practice of baptizing a living person on behalf of one who is dead, with the living person acting as the deceased person's proxy...
were performed in the White River, which flowed through the settlement. These have not been conducted since Strang's lifetime due to a lack of prophetic leadership, though the Strangites still believe in the validity of this doctrine, as do members of the LDS and certain other Mormon factions.

Because land prices in the Voree area were high, it was difficult for church members to "gather" to the settlement and purchase farmlands. Additional trouble ensued when a group of Strangite leaders, led by Aaron Smith, rejected Strang and formed a schismatic group in Voree. For these and other reasons, Strang relocated his church headquarters to Beaver Island
Beaver Island (Lake Michigan)
Beaver Island is the largest island in Lake Michigan and part of the Beaver Island archipelago. Once home to a unique American monarchy, the island is now a popular tourist and vacation destination....
by 1850. Most of his members followed him, though a small minority elected to remain in Voree. Opposition in Beaver Island ultimately led to the fatal wounding of Strang in June 1856; he returned to Voree, where he died weeks after the shooting. His followers were forcibly expelled from the island, and most abandoned his church entirely. A loyal remnant remained, however, with many of them choosing to return to Voree and nearby areas. The Strangite church still considers Voree to be a "gathering place" for its members.

The diminutive Strangite organization continues to maintain a presence in Voree to this day. Two different factions maintain meetinghouses there; at least one has a congregation that meets there regularly. There are also two Internet-based groups of Strangites at Independence, Missouri and Shreveport, Louisiana. The historical society at nearby Burlington
Burlington, Wisconsin
Burlington is a city in Racine and Walworth counties in the U.S. state of Wisconsin, with the majority of the city located in Racine County. The population was 10,421 at the 2009 census.-History:...
has erected a monument at Voree to commemorate the Strangite settlement there.