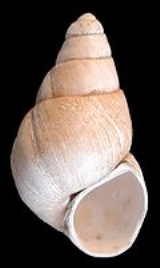 Encyclopedia
†Viviparus glacialis is an extinct species
Species
In biology, a species is one of the basic units of biological classification and a taxonomic rank. A species is often defined as a group of organisms capable of interbreeding and producing fertile offspring. While in many cases this definition is adequate, more precise or differing measures are...
of fossil
Fossil
Fossils are the preserved remains or traces of animals , plants, and other organisms from the remote past...
freshwater snail
Snail
Snail is a common name applied to most of the members of the molluscan class Gastropoda that have coiled shells in the adult stage. When the word is used in its most general sense, it includes sea snails, land snails and freshwater snails. The word snail without any qualifier is however more often...
, an aquatic
Aquatic animal
An aquatic animal is an animal, either vertebrate or invertebrate, which lives in water for most or all of its life. It may breathe air or extract its oxygen from that dissolved in water through specialised organs called gills, or directly through its skin. Natural environments and the animals that...
gastropod mollusks in the family Viviparidae
Viviparidae
Viviparidae, sometimes known as the river snails or mystery snails, are a family of large operculate freshwater snails, aquatic gastropod mollusks....
.

This species of snail had an elongated, slim, rather thick-walled shell
Gastropod shell
The gastropod shell is a shell which is part of the body of a gastropod or snail, one kind of mollusc. The gastropod shell is an external skeleton or exoskeleton, which serves not only for muscle attachment, but also for protection from predators and from mechanical damage...
with approximately 6 ¼ flat whorls which are separated by a shallow suture. The apex
Apex (mollusc)
Apex is an anatomical term for the tip of the mollusc shell of a gastropod, scaphopod, or cephalopod mollusc.-Gastropods:The word "apex" is most often used to mean the tip of the spire of the shell of a gastropod...
is blunt. The aperture
Aperture (mollusc)
The aperture is an opening in certain kinds of mollusc shells: it is the main opening of the shell, where part of the body of the animal emerges for locomotion, feeding, etc....
is slantingly oval and weakly angulated at the top. The peristome
Peristome
The word peristome is derived from the Greek peri, meaning 'around' or 'about', and stoma, 'mouth'. It is a term used to describe various anatomical features that surround an opening to an organ or structure. The term is used in plants and invertebrate animals, such as in describing the shells of...
is simple, not thickened and not continuous. There is a narrow umbilicus
Umbilicus (mollusk)
The umbilicus of a shell is the axially aligned, hollow cone-shaped space within the whorls of a coiled mollusc shell. The term umbilicus is often used in descriptions of gastropod shells, i.e...
that may be covered with callus
Parietal callus
A parietal callus is a feature of the shell anatomy of some groups of snails, i.e. gastropods. It is a thickened calcareous deposit which may be present on the parietal wall of the aperture of the adult shell. The parietal wall is the margin of the aperture and part of the wall of the body whorl...
. The surface of the shell is smooth and glossy and bears regular growing lines. Under a magnification of c. 50× a sculpture of fine spiral grooves can be observed. These 'grooves' are composed of densely spaced tiny holes. In most cases the periostracum
Periostracum
The periostracum is a thin organic coating or "skin" which is the outermost layer of the shell of many shelled animals, including mollusks and brachiopods. Among mollusks it is primarily seen in snails and clams, i.e. in bivalves and gastropods, but it is also found in cephalopods such as the...
has not been preserved but if still present this has a light brown to black color. Whether or not the shell had a color pattern, and if so what that might have been is unknown.

The species is only known from the Netherlands
Netherlands
The Netherlands is a constituent country of the Kingdom of the Netherlands, located mainly in North-West Europe and with several islands in the Caribbean. Mainland Netherlands borders the North Sea to the north and west, Belgium to the south, and Germany to the east, and shares maritime borders...
and the United Kingdom. From the United Kingdom only 6 specimens are known (among which is the holotype
Holotype
A holotype is a single physical example of an organism, known to have been used when the species was formally described. It is either the single such physical example or one of several such, but explicitly designated as the holotype...
). The specimens have been found in the Weybourn Crag, which has an estuarine facies. In the Netherlands the species has been only found in deposits of the River Rhine. It is known from clay pits in the surroundings of the village of Tegelen
Tegelen
Tegelen is a village in the province of Limburg in the Netherlands. It was an independent municipality until 2001, when it was merged into the municipality of Venlo.-Tiglian:...
(Province of Limburg
Limburg (Netherlands)
Limburg is the southernmost of the twelve provinces of the Netherlands. It is located in the southeastern part of the country and bordered by the province of Gelderland to the north, Germany to the east, Belgium to the south and part of the west, andthe Dutch province of North Brabant partly to...
) and in several dozens of borehole
Borehole
A borehole is the generalized term for any narrow shaft bored in the ground, either vertically or horizontally. A borehole may be constructed for many different purposes, including the extraction of water or other liquid or gases , as part of a geotechnical investigation, environmental site...
s, especially in the Southern part of the Netherlands. The species may occasionally occur there in very high numbers.

In the Netherlands known from interglacial
Interglacial
An Interglacial period is a geological interval of warmer global average temperature lasting thousands of years that separates consecutive glacial periods within an ice age...
deposits with a Tiglian and Pretiglian age. In the United Kingdom only present in the late Tiglian.


As an index fossil

Viviparus glacialis is, although already present in the Pretiglian, considered as a guide fossil or index fossil for the Tiglian.

Although all Viviparidae are ovoviviparous, nothing is known about the reproduction strategy of this species. Based upon counting of the annual growth rings within the shell, this species may reach an age of at least 12 years.

According to the ecological preferences of extant species co-occurring with Viviparus glacialis and the sedimentary facies
Facies
In geology, facies are a body of rock with specified characteristics. Ideally, a facies is a distinctive rock unit that forms under certain conditions of sedimentation, reflecting a particular process or environment....
in which these are found, the species favours quiet parts of a fluvial environment. From the same data it may be concluded that the species can endure a slight increase of salinity
Salinity
Salinity is the saltiness or dissolved salt content of a body of water. It is a general term used to describe the levels of different salts such as sodium chloride, magnesium and calcium sulfates, and bicarbonates...
.
The source of this article is wikipedia, the free encyclopedia.  The text of this article is licensed under the GFDL.