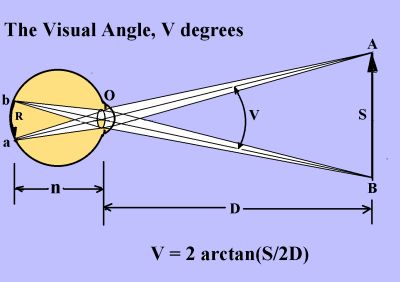 The visual angle is the angle a viewed object subtends at the eye, usually stated in degrees of arc.
It also is called the object's angular size.

, located in the distance

The three lines from object endpoint

heading toward the eye indicate the bundle of light rays that pass through the cornea, pupil and lens to form an optical image of endpoint

on the retina
Retina
The vertebrate retina is a light-sensitive tissue lining the inner surface of the eye. The optics of the eye create an image of the visual world on the retina, which serves much the same function as the film in a camera. Light striking the retina initiates a cascade of chemical and electrical...
at point

.
The central line of the bundle represents the chief ray

and its retinal image at

is the angle between the chief rays for

can be measured directly using a theodolite
Theodolite
A theodolite is a precision instrument for measuring angles in the horizontal and vertical planes. Theodolites are mainly used for surveying applications, and have been adapted for specialized purposes in fields like metrology and rocket launch technology...
placed at point

Or, it can be calculated using the formula,

However, for visual angles smaller than about 10 degrees, this simpler formula provides very close approximations:

The retinal image and visual angle

As the above sketch shows, a real image
Real image
In optics, a real image is a representation of an object in which the perceived location is actually a point of convergence of the rays of light that make up the image. If a screen is placed in the plane of a real image the image will generally become visible on the screen...
of the object is formed on the retina between points

. (See visual system
Visual system
The visual system is the part of the central nervous system which enables organisms to process visual detail, as well as enabling several non-image forming photoresponse functions. It interprets information from visible light to build a representation of the surrounding world...
). For small angles, the size of this retinal image

is the distance from the nodal points to the retina, about 17 mm.

That is just a bit larger than the retinal image size for the moon, which is about

). What matters is the visual angle

which determines the size of the retinal image.

In astronomy the term apparent size refers to the physical angle

Additional confusion has occurred because there are two qualitatively different "size" experiences for a viewed object. One is the perceived visual angle

(or apparent visual angle) which is the subjective correlate of

The other "size" experience is the object's perceived linear size

(or apparent linear size) which is the subjective correlate of

, the object's physical width or height or diameter.

Widespread use of the ambiguous terms "apparent size" and "perceived size" without specifying the units of measure has caused confusion.


Visual angle and the visual cortex

The brain's primary visual cortex (area V1 or Brodmann area 17) contains a spatially isomorphic representation of the retina (see retinotopy
Retinotopy
Retinotopy describes the spatial organization of the neuronal responses to visual stimuli. In many locations within the brain, adjacent neurons have receptive fields that include slightly different, but overlapping portions of the visual field. The position of the center of these receptive fields...
). Loosely speaking, it is a distorted "map" of the retina.
Accordingly, the size

, increases the extent of the corresponding neural activity pattern in area V1.

Their most important finding, however, relates to the perceived visual angle

and to the visual angle illusion.

and formed retinal images of the same size

, but the perceived angular size

of one was about 17 % larger than for the other, due to differences in the background patterns for the disks.

The major discovery was that the sizes of the area V1 activity patterns related to the disks were unequal, despite the fact that the retinal images were the same size. This size difference in area V1 correlated almost perfectly with the 17 % illusory difference between the perceived visual angles.