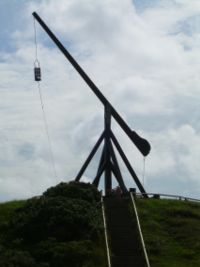 A vippefyr or bascule light or tipping lantern was a type of small navigational aid popular in Denmark
Denmark
Denmark is a Scandinavian country in Northern Europe. The countries of Denmark and Greenland, as well as the Faroe Islands, constitute the Kingdom of Denmark . It is the southernmost of the Nordic countries, southwest of Sweden and south of Norway, and bordered to the south by Germany. Denmark...
in the 18th century and before. It consisted of a basket in which wood
Wood
Wood is a hard, fibrous tissue found in many trees. It has been used for hundreds of thousands of years for both fuel and as a construction material. It is an organic material, a natural composite of cellulose fibers embedded in a matrix of lignin which resists compression...
or coal
Coal
Coal is a combustible black or brownish-black sedimentary rock usually occurring in rock strata in layers or veins called coal beds or coal seams. The harder forms, such as anthracite coal, can be regarded as metamorphic rock because of later exposure to elevated temperature and pressure...
was set; this was then burned. The basket was affixed to a lever
Lever
In physics, a lever is a rigid object that is used with an appropriate fulcrum or pivot point to either multiply the mechanical force that can be applied to another object or resistance force , or multiply the distance and speed at which the opposite end of the rigid object travels.This leverage...
that allowed it to be manipulated as required. (The bascule - from the French for "seesaw" - refers to the counterbalancing of the lever, which facilitates raising and lowering the basket; when one end is lowered the other is raised.) The vippefyr system was generally viewed as ineffective, as it produced little light and was usually unreliable.

In 1560 Frederick II of Denmark
Frederick II of Denmark
Frederick II was King of Denmark and Norway and duke of Schleswig from 1559 until his death.-King of Denmark:Frederick II was the son of King Christian III of Denmark and Norway and Dorothea of Saxe-Lauenburg. Frederick II stands as the typical renaissance ruler of Denmark. Unlike his father, he...
ordered the erection of Vippefyr at Skagen
Skagen
Skagen is a projection of land and a town, with a population of 8,515 , in Region Nordjylland on the northernmost tip of Vendsyssel-Thy, a part of the Jutland peninsula in northern Denmark...
, Anholt
Anholt (Denmark)
Anholt is a Danish island in the Kattegat, midway between Jutland and Sweden, with 171 permanent residents as of 1 January 2010. It is seven miles long and about four miles wide at its widest and covers an area of 21,75 km². Anholt is part of Norddjurs municipality in Region Midtjylland...
and Kullen Lighthouse
Kullen Lighthouse
The Kullen Lighthouse is an operational lighthouse in Scania, located by the mouth of Öresund, at the point of Kullaberg peninsula, in Höganäs, on the south-west coast of Sweden...
to mark the main route through Danish waters from the North Sea to the Baltic. The current vippefyr at Skagen is a reproduction of the original, which dates back to 1626, preceding Frederick's decree. The design dates to 1624 and Jens Pedersen Groves. The lighthouse was originally built and funded by the Danish state with the proceeds of the Sound Dues
Sound Dues
The Sound Dues were a toll on the use of the Sound which constituted up to two thirds of Denmark's state income in the 16th and 17th centuries...
for the use of the "Øresund", which King Eric of Pomerania
Eric of Pomerania
Eric of Pomerania KG was King Eric III of Norway Norwegian Eirik, King Eric VII of Denmark , and as Eric King of Sweden...
introduced in 1429 and which remained in effect until 1857. In 1577, the Danish
Denmark
Denmark is a Scandinavian country in Northern Europe. The countries of Denmark and Greenland, as well as the Faroe Islands, constitute the Kingdom of Denmark . It is the southernmost of the Nordic countries, southwest of Sweden and south of Norway, and bordered to the south by Germany. Denmark...
astronomer Tycho Brahe
Tycho Brahe
Tycho Brahe , born Tyge Ottesen Brahe, was a Danish nobleman known for his accurate and comprehensive astronomical and planetary observations...
became the lighthouse administrator at Kullen, a position he held until his death in 1601.
The vippefyrs at Skagen, Anholt and Kullen were not the only such lights. For instance, in 1705 the Danish postal service established a bascule light on the island of Bågø
Bågø
Bågø is a small Danish island located in the Little Belt 5 km north-west of Assens on the island of Funen belonging to Assens Municipality. With an area of 6.2 km2, as of 1 January 2010 it has a population of 35. The island is divided into three low slopes reaching a maximum height of 8...
in the Little Belt
Little Belt
The Little Belt is a strait between the Danish island of Funen and the Jutland Peninsula.The belt is about 50 km long and 800m to 28 km wide, the maximum depth is approximately 75 m, and contains numerous small Danish islands....
on the mail route Assens
Assens, Denmark
Assens is a town with a population of 6,060 on the west coast of the island of Funen at the shore of the Little Belt in central Denmark. Assens is the municipal seat of Assens municipality in Region of Southern Denmark. It was the birthplace of sculptor Jens Adolf Jerichau who married the...
-Årøsund. The photo at left is a replica light built at Verdens Ende
Verdens Ende
Verdens Ende is located at the southernmost tip of the island of Tjøme in Vestfold, Norway.It is a scenic spot with panoramic views of the Skagerrak and fishing facilities. It is composed of various islets and rocks. It is one of the most popular scenic locations in the area. It also has a replica...
, Norway
Norway
Norway , officially the Kingdom of Norway, is a Nordic unitary constitutional monarchy whose territory comprises the western portion of the Scandinavian Peninsula, Jan Mayen, and the Arctic archipelago of Svalbard and Bouvet Island. Norway has a total area of and a population of about 4.9 million...
. It is located on the southernmost tip of Tjøme
Tjøme
Tjøme is a municipality in Vestfold county, Norway. The administrative centre of the municipality is the village of Tjøme. The parish of Tjømø was established as a municipality on 1 January 1838 .-Name:...
, an island on the west side of the entrance to Oslofjord
Oslofjord
The Oslofjord is a bay in the south-east of Norway, stretching from an imaginary line between the Torbjørnskjær and Færder lighthouses and down to Langesund in the south to Oslo in the north....
.
The source of this article is wikipedia, the free encyclopedia.  The text of this article is licensed under the GFDL.