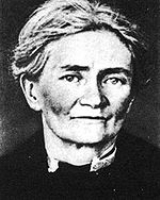 Encyclopedia
Hon. Violet Albina Gibson (1876, Dublin, Ireland
Ireland
Ireland is an island to the northwest of continental Europe. It is the third-largest island in Europe and the twentieth-largest island on Earth...
- 2 May 1956, Northampton
Northampton
Northampton is a large market town and local government district in the East Midlands region of England. Situated about north-west of London and around south-east of Birmingham, Northampton lies on the River Nene and is the county town of Northamptonshire. The demonym of Northampton is...
, UK), the daughter of the 1st Lord Ashbourne
Edward Gibson, 1st Baron Ashbourne
Edward Gibson, 1st Baron Ashbourne PC, QC was an Irish lawyer and Lord Chancellor of Ireland.-Background and education:...
, is best known for shooting Benito Mussolini
Benito Mussolini
Benito Amilcare Andrea Mussolini was an Italian politician who led the National Fascist Party and is credited with being one of the key figures in the creation of Fascism....
in Rome
Rome
Rome is the capital of Italy and the country's largest and most populated city and comune, with over 2.7 million residents in . The city is located in the central-western portion of the Italian Peninsula, on the Tiber River within the Lazio region of Italy.Rome's history spans two and a half...
in 1926.

On 7 April 1926, Violet Gibson shot Mussolini, Italy's Fascist leader, while he sat in a car after leaving an assembly of the International Congress of Surgeons, to whom he had delivered a speech on the wonders of modern medicine. Gibson shot at Mussolini three times twice hitting him in the nose. Gibson was almost lynched on the spot by an angry mob, but police intervened and took her off for questioning. Mussolini was wounded only slightly and after his nose was bandaged he continued his parade on the Capitoline.

At the time of the assassination attempt Violet Gibson was 50 years old and did not explain her reason for trying to assassinate Mussolini. It has been theorised that Gibson, an Anglo-Irish
Anglo-Irish
Anglo-Irish was a term used primarily in the 19th and early 20th centuries to identify a privileged social class in Ireland, whose members were the descendants and successors of the Protestant Ascendancy, mostly belonging to the Church of Ireland, which was the established church of Ireland until...
aristocrat
Aristocracy (class)
The aristocracy are people considered to be in the highest social class in a society which has or once had a political system of Aristocracy. Aristocrats possess hereditary titles granted by a monarch, which once granted them feudal or legal privileges, or deriving, as in Ancient Greece and India,...
, was insane at the time of the attack and the idea of assassinating Mussolini was hers and that she worked alone. Gibson was later deported to Britain
Great Britain
Great Britain or Britain is an island situated to the northwest of Continental Europe. It is the ninth largest island in the world, and the largest European island, as well as the largest of the British Isles...
after being released without charge at the request of Mussolini. She spent the rest of her life in a mental asylum, St Andrew's Hospital
St Andrew's Hospital
St Andrew's Hospital in Northampton, England is a psychiatric hospital run by a non-profit-making, charitable trust. It is by far the largest mental health facility in UK, providing national specialist services for adolescents, men, women and older people with mental illness, learning disability,...
in Northampton
Northampton
Northampton is a large market town and local government district in the East Midlands region of England. Situated about north-west of London and around south-east of Birmingham, Northampton lies on the River Nene and is the county town of Northamptonshire. The demonym of Northampton is...
. She is buried in Kingsthorpe
Kingsthorpe
Kingsthorpe was once a Northamptonshire village but is now an extremely affluent suburb to the north-west of the major town of Northampton, England. The River Nene flows through the area to the west...
Cemetery, Northampton. 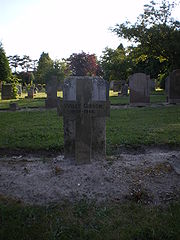