Encyclopedia
Vimāna is a word with several meanings ranging from temple or palace to mythological flying machines described in Sanskrit epics.

Sanskrit
Sanskrit
Sanskrit , is a historical Indo-Aryan language and the primary liturgical language of Hinduism, Jainism and Buddhism.Buddhism: besides Pali, see Buddhist Hybrid Sanskrit Today, it is listed as one of the 22 scheduled languages of India and is an official language of the state of Uttarakhand...
vi-māna literally means "measuring out, traversing" or "having been measured out". It can refer to (ref Monier-Williams): 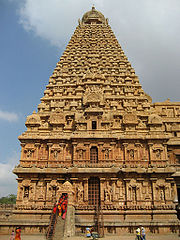 The predecessors of the flying vimanas of the Sanskrit epics are the flying chariots employed by various gods in the Vedas: the Sun (see Sun chariot) and Indra
Indra
' or is the King of the demi-gods or Devas and Lord of Heaven or Svargaloka in Hindu mythology. He is also the God of War, Storms, and Rainfall.Indra is one of the chief deities in the Rigveda...
and several other Vedic deities are transported by flying wheeled chariot
Chariot
The chariot is a type of horse carriage used in both peace and war as the chief vehicle of many ancient peoples. Ox carts, proto-chariots, were built by the Proto-Indo-Europeans and also built in Mesopotamia as early as 3000 BC. The original horse chariot was a fast, light, open, two wheeled...
s pulled by animals, usually horses (but the Vedic god Pūsan's chariot is pulled by goats, as is that of Norse Thor
Thor
In Norse mythology, Thor is a hammer-wielding god associated with thunder, lightning, storms, oak trees, strength, the protection of mankind, and also hallowing, healing, and fertility...
).

The Rigveda
Rigveda
The Rigveda is an ancient Indian sacred collection of Vedic Sanskrit hymns...
does not mention Vimanas, but verses RV 1.164.47-48 have been taken as evidence for the idea of "mechanical birds":

"Dark the descent: the birds are golden-coloured; up to the heaven they fly robed in the waters.
Again descend they from the seat of Order, and all the earth is moistened with their fatness."
"Twelve are the fellies, and the wheel is single; three are the naves. What man hath understood it?
Therein are set together spokes three hundred and sixty, which in nowise can be loosened." ("trans." Griffith)


although the 'wheel' is likeliest a metaphor
Metaphor
A metaphor is a literary figure of speech that uses an image, story or tangible thing to represent a less tangible thing or some intangible quality or idea; e.g., "Her eyes were glistening jewels." Metaphor may also be used for any rhetorical figures of speech that achieve their effects via...
ical description of the yearly cycle, and '12' and the '360' are likeliest its months and days. 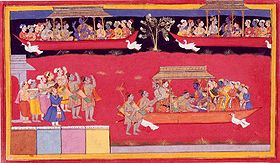 In the Ramayana
Ramayana
The Ramayana is an ancient Sanskrit epic. It is ascribed to the Hindu sage Valmiki and forms an important part of the Hindu canon , considered to be itihāsa. The Ramayana is one of the two great epics of India and Nepal, the other being the Mahabharata...
, the pushpaka ("flowery") vimana of Ravana
Ravana
' is the primary antagonist character of the Hindu legend, the Ramayana; who is the great king of Lanka. In the classic text, he is mainly depicted negatively, kidnapping Rama's wife Sita, to claim vengeance on Rama and his brother Lakshmana for having cut off the nose of his sister...
is described as follows:

"The Pushpaka chariot that resembles the Sun and belongs to my brother was brought by the powerful Ravana; that aerial and excellent chariot going everywhere at will .... that chariot resembling a bright cloud in the sky ... and the King [Rama] got in, and the excellent chariot at the command of the Raghira, rose up into the higher atmosphere."

It is the first flying vimana mentioned in Hindu mythology
Hindu mythology
Hindu religious literature is the large body of traditional narratives related to Hinduism, notably as contained in Sanskrit literature, such as the Sanskrit epics and the Puranas. As such, it is a subset of Nepali and Indian culture...
(as distinct from the gods' flying horse-drawn chariot
Chariot
The chariot is a type of horse carriage used in both peace and war as the chief vehicle of many ancient peoples. Ox carts, proto-chariots, were built by the Proto-Indo-Europeans and also built in Mesopotamia as early as 3000 BC. The original horse chariot was a fast, light, open, two wheeled...
s).

Pushpaka was originally made by Vishwakarma for Brahma
Brahma
Brahma is the Hindu god of creation and one of the Trimurti, the others being Vishnu and Shiva. According to the Brahma Purana, he is the father of Mānu, and from Mānu all human beings are descended. In the Ramayana and the...
the Hindu god of creation, later Brahma gifted it to Kubera
Kubera
Kubera , also spelt Kuber, is the Lord of wealth and the god-king of the semi-divine Yakshas in Hindu mythology. He is regarded as the regent of the North , and a protector of the world His many epithets extol him as the overlord of numerous semi-divine species and the owner of the treasures of...
, the God of wealth, but was later stolen, along with Lanka
Lanka
Sri Lanka is the name given in Hindu mythology to the island fortress capital of the legendary king Ravana in the great Hindu epics, the Ramayana and the Mahabharata...
, by his half-brother, the demon king Ravana
Ravana
' is the primary antagonist character of the Hindu legend, the Ramayana; who is the great king of Lanka. In the classic text, he is mainly depicted negatively, kidnapping Rama's wife Sita, to claim vengeance on Rama and his brother Lakshmana for having cut off the nose of his sister...
.

One example in the Mahabharata
Mahabharata
The Mahabharata is one of the two major Sanskrit epics of ancient India and Nepal, the other being the Ramayana. The epic is part of itihasa....
is that the Asura
Asura
-In Hinduism:In Hinduism, the Asuras constitute a group of power-seeking deities, sometimes considered sinful and materialistic. The Daityas and Danavas were combinedly known as Asuras. The Asura were opposed to the Devas. Both groups are children of Kasyapa...
Maya
Mayasura
In Hindu mythology, Maya , or Mayāsura was a great ancient king of the Asura, Daitya and Rakshasa races upon earth. He was also the chief architect of the people of the netherworld.-Tripura:...
had a Vimana measuring twelve cubit
Cubit
The cubit is a traditional unit of length, based on the length of the forearm. Cubits of various lengths were employed in many parts of the world in Antiquity, in the Middle Ages and into Early Modern Times....
s in circumference, with four strong wheels.

The Mahabharata compliments "the all-knowing Yavanas
Yona
"Yona" is a Pali word used in ancient India to designate Greek speakers. Its equivalent in Sanskrit, Malayalam, Kannada, Telugu and Tamil is the word "Yavana" and "Jobonan/Jubonan" in Bengali...
" (sarvajnaa yavanaa, said to mean the Greeks
Greeks
The Greeks, also known as the Hellenes , are a nation and ethnic group native to Greece, Cyprus and neighboring regions. They also form a significant diaspora, with Greek communities established around the world....
), as the creators of the vimanas: The Yavanas, O king, are all-knowing; the Suras are particularly so (sarvajnā yavanā rajan shurāz caiva vishesatah).

Vimāna-vāsin ('dweller in vimāna') is a class of deities who served the . These Vaimānika deities dwell in the Ūrdhva Loka heavens.

A vimāna may be seen in a dream, such as the nalinī-gulma.


Vimanas and the Vaimanika Shastra

The Vaimanika Shastra
Vaimanika Shastra
The Vaimānika Shāstra वैमानिक शास्त्र is an early 20th century Sanskrit text on aeronautics obtained by psychic channeling and automatic writing...
is an early 20th century Sanskrit
Sanskrit
Sanskrit , is a historical Indo-Aryan language and the primary liturgical language of Hinduism, Jainism and Buddhism.Buddhism: besides Pali, see Buddhist Hybrid Sanskrit Today, it is listed as one of the 22 scheduled languages of India and is an official language of the state of Uttarakhand...
text on aeronautics, claimed to be obtained by mental channeling, about construction of vimānas, the "chariots of the Gods".

The existence of the text was revealed in 1952 by G. R. Josyer, according to whom it is due to one Pandit Subbaraya Shastry, who dictated it in 1918-1923. A Hindi translation was published in 1959, the Sanskrit text with an English translation in 1973. It has 3000 shloka
Shloka
A ' is a category of verse line developed from the Vedic Anuṣṭubh. It is the basis for Indian Epic verse, and may be considered the Indian verse form par excellence, occurring, as it does, far more frequently than any other meter in classical Sanskrit poetry. The Mahabharata and Ramayana, for...
s in 8 chapters and was attributed by Shastry to Maharishi
Maharishi
Maharishi is the anglicized version of the Sanskrit word Maharshi महर्षि . Maharishi is often use as an addition to a person's name as an honorary title. The term was first seen in modern English literature in the 18th century...
Bharadvaja, which makes it of purportedly "ancient" origin, and hence it has a certain notability in ancient astronaut theories.

A study by aeronautical and mechanical engineering at Indian Institute of Science, Bangalore in 1974 concluded that the aircraft described in the text were "poor concoctions" and that the author showed complete lack of understanding of aeronautics.

Vimanas have appeared in books, films, internet and games including: