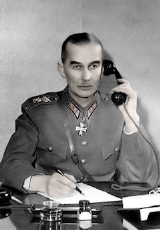 Encyclopedia
Vilho Petter Nenonen was a Finnish
Finland
Finland , officially the Republic of Finland, is a Nordic country situated in the Fennoscandian region of Northern Europe. It is bordered by Sweden in the west, Norway in the north and Russia in the east, while Estonia lies to its south across the Gulf of Finland.Around 5.4 million people reside...
general
General
A general officer is an officer of high military rank, usually in the army, and in some nations, the air force. The term is widely used by many nations of the world, and when a country uses a different term, there is an equivalent title given....
.

Received his military education in the Hamina Cadet School 1896-1901, in the Mihailov Artillery School in St Petersburg 1901-1903, and in St Petersburg Artillery Academy 1906-1909. He served in the Russian army
Army
An army An army An army (from Latin arma "arms, weapons" via Old French armée, "armed" (feminine), in the broadest sense, is the land-based military of a nation or state. It may also include other branches of the military such as the air force via means of aviation corps...
during World War I
World War I
World War I , which was predominantly called the World War or the Great War from its occurrence until 1939, and the First World War or World War I thereafter, was a major war centred in Europe that began on 28 July 1914 and lasted until 11 November 1918...
. When the Finnish Civil War
Finnish Civil War
The Finnish Civil War was a part of the national, political and social turmoil caused by World War I in Europe. The Civil War concerned control and leadership of The Grand Duchy of Finland as it achieved independence from Russia after the October Revolution in Petrograd...
began he moved to Finland and was given the job of creating the artillery
Artillery
Originally applied to any group of infantry primarily armed with projectile weapons, artillery has over time become limited in meaning to refer only to those engines of war that operate by projection of munitions far beyond the range of effect of personal weapons...
of general Mannerheim
Carl Gustaf Emil Mannerheim
Baron Carl Gustaf Emil Mannerheim was the military leader of the Whites in the Finnish Civil War, Commander-in-Chief of Finland's Defence Forces during World War II, Marshal of Finland, and a Finnish statesman. He was Regent of Finland and the sixth President of Finland...
's White Army
White Guard (Finland)
The White Guard was a voluntary militia that emerged victorious over the socialist Red Guard as part of the Whites in the Finnish Civil War of 1918...
. After the war he also served as the Minister of Defence
Minister of Defence (Finland)
The Minister of Defence is a member of the Finnish Council of State. As the head of the Ministry of Defence, the minister is responsible for the administration of national defence. The ministry is headquartered in Helsinki...
between 1923 and 1924. During the Continuation War
Continuation War
The Continuation War was the second of two wars fought between Finland and the Soviet Union during World War II.At the time of the war, the Finnish side used the name to make clear its perceived relationship to the preceding Winter War...
he was a part of Mannerheim's inner circle. He was promoted to the rank of General of the artillery in 1941.

Nenonen developed the Finnish Army
Finnish Army
The Finnish Army is the land forces branch of the Finnish Defence Forces.Today's Army is divided into six branches: the infantry , field artillery, anti-aircraft artillery, engineers, signals, and materiel troops.-History of the Finnish Army:Between 1809 and 1917 Finland was an autonomous part of...
's artillery
Artillery
Originally applied to any group of infantry primarily armed with projectile weapons, artillery has over time become limited in meaning to refer only to those engines of war that operate by projection of munitions far beyond the range of effect of personal weapons...
and tactics that proved decisive in the defensive victory in the Battle of Tali-Ihantala
Battle of Tali-Ihantala
The Battle of Tali-Ihantala was part of the Continuation War , which occurred during World War II. The battle was fought between Finnish forces—using war material provided by Germany—and Soviet forces...
. The trajectory calculation formulas he developed are still in use today by all modern artillery.