Encyclopedia
The Castro of Vila Nova de São Pedro is a Chalcolithic archaeological site in the civil parish of Vila Nova de São Pedro, municipality of Azambuja, in the Portuguese
Portugal
Portugal , officially the Portuguese Republic is a country situated in southwestern Europe on the Iberian Peninsula. Portugal is the westernmost country of Europe, and is bordered by the Atlantic Ocean to the West and South and by Spain to the North and East. The Atlantic archipelagos of the...
Estremadura
Estremadura
Estremadura may refer to:* Estremadura Province * Estremadura Province * Lisboa VR, a Portuguese wine region called Estremadura until 2009...
area of Lezíria do Tejo. It is important for the discovery of thousands of arrowheads within its fortified settlement, associated with the Chalcolithic period of human settlement. associated with the long-lived fortified town, or castro
Castro culture
Castro culture is the archaeological term for naming the Celtic archaeological culture of the northwestern regions of the Iberian Peninsula from the end of the Bronze Age until it was subsumed in local Roman culture...
, of Zambujal, near Torres Vedras Municipality. The period of "urban" settlement lasted from 2600 to 1300 BCE, and was a contemporary of the southeastern Spanish
Spain
Spain , officially the Kingdom of Spain languages]] under the European Charter for Regional or Minority Languages. In each of these, Spain's official name is as follows:;;;;;;), is a country and member state of the European Union located in southwestern Europe on the Iberian Peninsula...
settlements of Los Millares
Los Millares
Los Millares is the name of a Chalcolithic occupation site 17 km north of Almería, in the municipality of Santa Fe de Mondújar, Andalusia, Spain. The complex was in use from the end of the fourth millennium to the end of the second millennium BC and probably supported somewhere around 1000...
and El Argar
El Argar
El Argar is the type site of an Early Bronze Age culture called the Argaric culture, which flourished from the town of Antas, in what is now the province of Almería, south-east of Spain, between c. 1800 BC and 1300 BC....
. 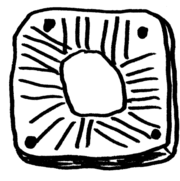 The southwestern region of the Iberian peninsula
Iberian Peninsula
The Iberian Peninsula , sometimes called Iberia, is located in the extreme southwest of Europe and includes the modern-day sovereign states of Spain, Portugal and Andorra, as well as the British Overseas Territory of Gibraltar...
is a focus of Megalithism, predating by 1000 years the megalithic region of western France
France
The French Republic , The French Republic , The French Republic , (commonly known as France , is a unitary semi-presidential republic in Western Europe with several overseas territories and islands located on other continents and in the Indian, Pacific, and Atlantic oceans. Metropolitan France...
: The erection of dolmens, menhir
Menhir
A menhir is a large upright standing stone. Menhirs may be found singly as monoliths, or as part of a group of similar stones. Their size can vary considerably; but their shape is generally uneven and squared, often tapering towards the top...
s and castros developed over a long period of southern and central Portugal. At about the beginning of the 3rd millennium BCE, contemporaneous with metallurgy associated with the copper and precious metals, new types of tomb-building appeared in the western Mediterranean regions. There has been some debate as to whether these develops originated in the Eastern Mediterranean or whether they are independent of these cultures, although there is little evidence to support the hypothesis, other than the use of the termtholoi (which can be seen as a more contemporaneous development).

It has been determined that early inhabitants in this region began building fortifications around 2700 BCE, with the Dolmen of Herdade de Zambujal being the more central, with a very complex plan and up to six reconstructions in its lifetime. These cultures left behind many traces of their culture: stylized cups, crescents of clay, sticks of slate and the so called plate-idols, that some archaeo-astronomers consider to be precise calendaries. Nevertheless, the exchange with other groups, particularly Los Millares, is also present in the archaeological record. The inhabitants of the fort had its economy based on agriculture and grazing, which was suitable to the surrounding lowlands.

But, trade proved to have greater interest: the first settlers brought with them red-tinged pottery, more delicate then later ceramics, with excellent decoration, suggesting their contact with peoples of a superior civilization (something that they could not produce with similar quality). With the arrival of the Beaker peoples
Beaker culture
The Bell-Beaker culture , ca. 2400 – 1800 BC, is the term for a widely scattered cultural phenomenon of prehistoric western Europe starting in the late Neolithic or Chalcolithic running into the early Bronze Age...
around 2200 BCE, the local culture entered a new period of development that mixed the Beaker people burial rites, while maintaining other traditions. It is likely that the Beaker people's presence within this region also resulted in secondary phase of development of this culture. The inter-cultural exchanges between groups were more frequent, and their influence spread to distances of 1000 kilometres or greater, as was the case with the Treilles
Treilles
Treilles is a commune in the Aude department in southern France.-Population:...
, in the French Languedoc. Local artifacts associated with these cultures, such as the Palmela arrowheads or bell-shaped beakers, were commonly found dispersed in the western half of the Iberian peninsula, suggesting an origin in the region. After 1900 BCE there is a decentralization in the Iberian peninsula, resulting in a dispersion of many of theses artifacts to as far as Bohemia
Bohemia
Bohemia is a historical region in central Europe, occupying the western two-thirds of the traditional Czech Lands. It is located in the contemporary Czech Republic with its capital in Prague...
.

With the arrival Bronze Age
Bronze Age
The Bronze Age is a period characterized by the use of copper and its alloy bronze as the chief hard materials in the manufacture of some implements and weapons. Chronologically, it stands between the Stone Age and Iron Age...
technologies in southern Iberia after 1800 BCE (particularly in El Argar
El Argar
El Argar is the type site of an Early Bronze Age culture called the Argaric culture, which flourished from the town of Antas, in what is now the province of Almería, south-east of Spain, between c. 1800 BC and 1300 BC....
), the influence of the castro culture of Vila Nova de São Pedro begins to slowly decline. Finally, around 1300, it merges with the wider culture associated with internally burnished pottery, including most of Portugal and the wider Atlantic Bronze Age
Atlantic Bronze Age
The Atlantic Bronze Age is a cultural complex of the Bronze Age period of approximately 1300–700 BC that includes different cultures in Portugal, Andalusia, Galicia, Armorica and the British Isles.-Trade:...
cultures.

Following the authorization of Vitor Manuel dos Santos Gonçalves, in 1985, new archaeological investigations were undertaken at the site.

The rural site, is located on a small hilltop dominated by the ruins of a castle, and intersected in the north, east and west by the Ribeira de Alcoentre, Ribeira do Carrascal and Ribeira do Massuca (respectively).

The castro settlement was built during two phases: initially (associated with the VNSP I culture), an open settlement; followed by a fortified settlement (VSNP 2) encircled by wall of rocks (covered in clay). Within its perimeter are the vestiges of a semi-circular domed oven/kiln, alongside a limestone space and cistern
Cistern
A cistern is a waterproof receptacle for holding liquids, usually water. Cisterns are often built to catch and store rainwater. Cisterns are distinguished from wells by their waterproof linings...
. Many of these pre-existing structures were dismantled and/or destroyed during a phase of settlement (VNSP III), followed by a fourth period of occupation which resulted in another phase of destruction (VNSP IV), leading to the construction of a new system of defense.

The oven and ancillary space (where was discovered full of pottery from the VSNP 2 era) constitutes a group associated with the industrial fabrication of ceramics, receiving water from the cistern for its operation. These structures were destroyed and substituted for new spaces (VNSP III) when the spaces were expropriated for the metallurgic manufacture of copper, spinning and weaving, and the manufacture of dairy products, etc.