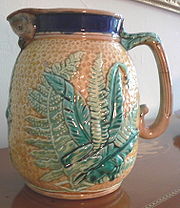 Victorian Majolica is earthenware pottery made in 19th century Britain, Europe and the USA with molded surfaces and colorful clear lead glazes.

Victorian Majolica was originated by Mintons Ltd, who exhibited it at the Great Exhibition of 1851 under the name Palissy ware
Palissy ware
"Palissy ware" is a nineteenth-century term for ceramics produced in the style of the famous French potter Bernard Palissy , who referred to his own work in the familiar manner as rustique...
. The debt to the eccentric 16th century potter Bernard Palissy
Bernard Palissy
Bernard Palissy was a French Huguenot potter, hydraulics engineer and craftsman, famous for having struggled for sixteen years to imitate Chinese porcelain...
is obvious from its naturalistic plant and animal motifs molded in relief and splashed with bold color and clear glazes.

Mintons had for some time been making tin-glazed pottery
Tin-glazed pottery
Tin-glazed pottery is a majolica pottery covered in glaze containing tin oxide which is white, shiny and opaque. The pottery body is usually made of red or buff colored earthenware and the white glaze was often used to imitate Chinese porcelain...
(which is opaque, white and shiny and painted in color) somewhat in the style of Renaissance Italian maiolica
Maiolica
Maiolica is Italian tin-glazed pottery dating from the Renaissance. It is decorated in bright colours on a white background, frequently depicting historical and legendary scenes.-Name:...
, which they called majolica ware, anglicizing the Italian maiolica.


The collection of Palissy and Majolica ware, however, is that which appears to have created the greatest sensation among Parisian connoisseurs. The reader will remember that the main difference in these wares is that whereas the Palissy ware is coloured by a transparent glaze, Majolica ware contains the colour (opaque) in the material. The care and taste with which these manufactures have been brought by the Messrs. Minton to their present state of perfection, have been amply rewarded. Within a few days of the opening of the Exhibition all the specimens exhibited had been sold.

Despite this reminder, the public came to call Minton's Palissy Ware majolica ware; Palissy ware dropped out of use and majolica stuck. In the 1880s, the curators of the South Kensington Museum (now the V&A) tried to clear up the confusion by reviving the Italian pronunciation maiolica for Italian tin-glaze.
Wedgwood
Wedgwood
Wedgwood, strictly speaking Josiah Wedgwood and Sons, is a pottery firm owned by KPS Capital Partners, a private equity company based in New York City, USA. Wedgwood was founded on May 1, 1759 by Josiah Wedgwood and in 1987 merged with Waterford Crystal to create Waterford Wedgwood, an...
began to manufacture majolica about ten years after Mintons. Wedgwood's glazes and modeling were denser and more formal than Minton's, but there were many pieces that displayed the naturalism and humor of Minton shapes. Wedgwood's majolica included cachepots, pitchers, candlesticks, cheese bells, umbrella stands, sardine boxes, plates in naturalistic patterns, bread trays, etc. In Wedgwood's familiar "greenware" the green glaze emphasizes the low relief patterning, typically of basketwork and foliage.

Majolica was influenced by the design of the old "Cauliflower" and "Pineapple" teapots made by Thomas Whieldon
Thomas Whieldon
Thomas Whieldon was one of the most respected and well known English potters of his time. By 1740, he was the master of pottery at Fenton Low...
, Wedgwood and other 18th-century Staffordshire potters. Both English and American majolica potters reproduced the "Cauliflower" pattern and other raised fruit, vegetable, leaf, and berry patterns, with green, yellow, pink, brown, light blue and purple-blue glazes. There is also a teapot of yellow corn and green leaves, similar to the old Whieldon "Pineapple" teapots, and a teapot, pitcher and sugar bowl of pink coral and green seaweed with accents of brown and blue, marked "Etruscan Majolica." Many late 19th-century majolica designs had rustic motifs with backgrounds of basketry and wooden-bound buckets decorated with molded flowers, birds, fish and animals. Handles were made like rustic tree branches, rose stems and twined flowers and leaves.

Many potteries responded to the popularity of majolica.

Several American firms also made majolica, with the English born Edwin Bennett
Edwin Bennett (potter)
Edwin Bennett , born in Newhall, Derbyshire, was an English American pioneer of the pottery industry and art in the United States, and founder of the Edwin Bennett Pottery Company of Baltimore, Maryland...
producing it in Baltimore
Baltimore
Baltimore is the largest independent city in the United States and the largest city and cultural center of the US state of Maryland. The city is located in central Maryland along the tidal portion of the Patapsco River, an arm of the Chesapeake Bay. Baltimore is sometimes referred to as Baltimore...
as early as the 1850's. The best known are Griffin, Smith and Hill of Phoenixville, Pennsylvania, whose Etruscan majolica made from 1880 to 1890 includes compotes with dolphin supports and flower, shell, or jewel cups, a design of coral weed and seashells, and tableware with leaves and ferns. Their mark was an impressed monogram, "G.S.H.," sometimes circled and with the words "Etruscan Majolica".

Majolica was also made by Odell and Booth at Tarrytown, New York
Tarrytown, New York
Tarrytown is a village in the town of Greenburgh in Westchester County, New York, United States. It is located on the eastern bank of the Hudson River, about north of midtown Manhattan in New York City, and is served by a stop on the Metro-North Hudson Line...
, and by the Faience Manufacturing Company at Greenpoint, Long Island
Long Island
Long Island is an island located in the southeast part of the U.S. state of New York, just east of Manhattan. Stretching northeast into the Atlantic Ocean, Long Island contains four counties, two of which are boroughs of New York City , and two of which are mainly suburban...
, whose mark is an incised "F.M. Co." Their pottery was dipped in colored glazes, creating a streaked or marbled effect. Majolica was made at Evansville, Indiana. Work from the Chesapeake Pottery in Baltimore
Baltimore
Baltimore is the largest independent city in the United States and the largest city and cultural center of the US state of Maryland. The city is located in central Maryland along the tidal portion of the Patapsco River, an arm of the Chesapeake Bay. Baltimore is sometimes referred to as Baltimore...
was called Clifton Ware and was marked "Clifton Decor 'R' " with the monogram "D.F.H.".

Production had increased since 1875 but with fewer original examples and with less artistic enterprise. By the death of Queen Victoria in 1901, majolica production was at an end, superseded by Art Nouveau
Art Nouveau
Art Nouveau is an international philosophy and style of art, architecture and applied art—especially the decorative arts—that were most popular during 1890–1910. The name "Art Nouveau" is French for "new art"...
and Art pottery.

Much Victorian majolica appears in antique shops and auctions. It is popular with collectors and many of the old patterns have been reproduced.