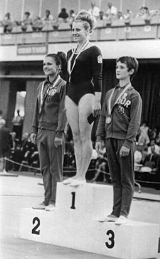 Encyclopedia
Věra Čáslavská (ˈvjɛra ˈtʃaːslafskaː; born 3 May 1942) is a Czech
Czech Republic
The Czech Republic is a landlocked country in Central Europe. The country is bordered by Poland to the northeast, Slovakia to the east, Austria to the south, and Germany to the west and northwest....
gymnast
Gymnastics
Gymnastics is a sport involving performance of exercises requiring physical strength, flexibility, agility, coordination, and balance. Internationally, all of the gymnastic sports are governed by the Fédération Internationale de Gymnastique with each country having its own national governing body...
. Blonde, cheerful and possessing impressive stage presence, she was generally popular with the public and won a total of 22 international titles. including seven Olympic gold medals, all in individual events (an all-time record among female Olympians).

Čáslavská is the most decorated Czech gymnast in history and is one of only two female gymnasts, along with Soviet Larisa Latynina, to win the all-around gold medal at two consecutive Olympics. She was also the 1966 all-around World Champion and the 1965 and 1967 all-around European Champion.

Caslavska scored 2 perfect scores of 10 in event finals at the 1967 European Championships.

Čáslavská has the distinction of holding more Olympic individual event titles than any other gymnast, a record she has now held for over 40 years. She is also the only gymnast, male or female, ever who has won Olympic gold on every individual event (all-around, vault, uneven bars, beam, floor exercise). Between 1964 and 1968 Čáslavská was undefeated in the all-around in major international competition; to date, she is the only female gymnast ever to win every Olympic, World Championships and European Championships all-around title from one Olympiad to the next. She was the most successful athlete at the 1968 Summer Olympics.
She won the 1968 Olympic All-Around title with the highest recorded score up to that time.
Her win by 1.4 points remains the largest winning margin in Olympics,World,World Cup or European Championships for women in an All-Around competition.

Between 1964-68 Caslavska won 19 individual gold medals in the major international competitions compared with 7 for all Soviet gymnasts during this time.

In addition to her gymnastics success, Čáslavská is known for her outspoken support of the Czechoslovak democratization movement and her opposition to the Soviet-led invasion of Czechoslovakia. At the 1968 Olympics in Mexico City, she took this protest to the world stage by quietly looking down and away while the Soviet national anthem was played during the medal ceremonies for the balance beam and floor exercise event finals. While Čáslavská's actions were applauded by her countrymen, they resulted in her becoming a persona non grata in the new regime. She was forced into retirement and for many years was denied the right to travel, work and attend sporting events.

Čáslavská was at her peak at the 1964 Summer Olympics
1964 Summer Olympics
The 1964 Summer Olympics, officially known as the Games of the XVIII Olympiad, was an international multi-sport event held in Tokyo, Japan in 1964. Tokyo had been awarded with the organization of the 1940 Summer Olympics, but this honor was subsequently passed to Helsinki because of Japan's...
in Tokyo, winning the overall title and taking gold medals in the balance beam and the vault, in addition to another silver medal in the team event. She would finally win a team gold at the 1966 World Championships
1966 World Artistic Gymnastics Championships
The 16th Artistic Gymnastics World Championships were held in Dortmund, West Germany, in 1966.-Medals:-All-around:-Team final:- Floor exercise :-Pommel horse:-Rings:-Vault:-Parallel bars:-Horizontal bar:-All-around:- Vault :...
, breaking the Soviet
Soviet Union
The Soviet Union , officially the Union of Soviet Socialist Republics , was a constitutionally socialist state that existed in Eurasia between 1922 and 1991....
monopoly in that event.

She was again dominant at the 1968 Summer Olympics
1968 Summer Olympics
The 1968 Summer Olympics, officially known as the Games of the XIX Olympiad, were an international multi-sport event held in Mexico City, Mexico in October 1968. The 1968 Games were the first Olympic Games hosted by a developing country, and the first Games hosted by a Spanish-speaking country...
, winning medals in all six events. She defended her all-around title and won additional gold medals on the floor, uneven bars and vault, as well as two silvers, for the team competition and balance beam. Her use of the "Jarabe tapatío
Jarabe tapatío
The Jarabe Tapatío dance in its standardized form was first choreographed by the Mexican, in the early twentieth century to celebrate a government-sponsored fiesta that commemorated the successful end of the Mexican Revolution....
" as the music for her floor routine made her immensely popular with the Mexican crowd. Shortly after the end of the competition, Čáslavská married runner Josef Odložil
Josef Odložil
Josef Odložil |Domašov]]) was a Czech middle distance runner. He was a national champion many times in the 1960s, but had mixed success at the international level....
, who had been a silver medalist at the 1964 Olympics in Tokyo. The ceremony, which took place at the Mexico City Cathedral, drew a crowd of thousands. Čáslavská was cited as being the most popular female athlete at the Olympics.

Čáslavská's wins at the 1968 Olympics were particularly poignant because of the political turmoil in Czechoslovakia. She had publicly voiced her strong opposition to soviet-style Communism and Soviet invasion, and had signed Ludvik Vaculik
Ludvík Vaculík
Ludvík Vaculík is a Czech writer and journalist. A prominent samizdat writer, he is most famous as the author of the "Two Thousand Words" manifesto of June 1968.-Pre-1968:...
's protest manifesto "Two Thousand Words
The Two Thousand Words
"The Two Thousand Words" is a manifesto written by Czech reformist writer Ludvík Vaculík in the midst of the Prague Spring, a period of political liberalization in Czechoslovakia that began in January 1968 with the election of Alexander Dubček and ended with a Soviet invasion in August.- History...
" in the spring of 1968. Consequently, to avoid being arrested, she spent the weeks leading up to the Olympics hiding in the mountain town of Šumperk
Šumperk
Šumperk is a town and district in the Olomouc Region of the Czech Republic. It is called "The Gate to Jeseníky mountains."- History :Šumperk was founded by German colonists in 1269. The German name Schönberg means "beautiful hill", and the name Šumperk is a Czech garbling of the original German...
, and was only granted permission to travel to Mexico City at the last minute.

At the Olympics, where she once again faced Soviet opposition, Čáslavská continued to subtly voice her views. After appearing to have won the gold medal on floor outright, the judging panel curiously upgraded the preliminary scores of Soviet Larisa Petrik, and declared a tie for the gold instead. All of this occurred on the heels of another very controversial judging decision that cost Čáslavská the gold on beam, instead awarding the title to Soviet rival Natalia Kuchinskaya
Natalia Kuchinskaya
Natalia Alexandrovna Kuchinskaya , also known as Natasha Kuchinskaya is a retired Soviet Olympic gymnast....
. Clearly disheartened and angered by the politics that favored the USSR, she protested during both medal ceremonies by quietly turning her head down and away during the playing of the Soviet national anthem.

Čáslavská's countrymen revered her for her brave demonstration on the world's biggest stage. Her federation, however, was none too pleased. For her consistent support of the Czechoslovak democratization movement (the so-called "Prague Spring
Prague Spring
The Prague Spring was a period of political liberalization in Czechoslovakia during the era of its domination by the Soviet Union after World War II...
") in 1968, and during the purges which followed the Soviet-led invasion in August 1968, she was deprived of the right to travel abroad and participate in public sport events both in Czechoslovakia and abroad. Čáslavská was effectively forced into retirement, and was considered a persona non grata for many years in her home country.

As of 2008, Čáslavská resides in Prague, and has opted to remain largely out of the public eye.