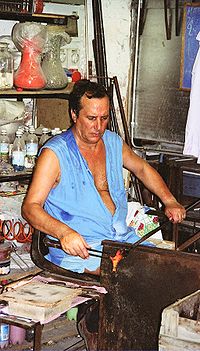 Venetian glass is a type of glass
Glass
Glass is an amorphous solid material. Glasses are typically brittle and optically transparent.The most familiar type of glass, used for centuries in windows and drinking vessels, is soda-lime glass, composed of about 75% silica plus Na2O, CaO, and several minor additives...
object made in Venice
Venice
Venice is a city in northern Italy which is renowned for the beauty of its setting, its architecture and its artworks. It is the capital of the Veneto region...
, Italy
Italy
Italy , officially the Italian Republic languages]] under the European Charter for Regional or Minority Languages. In each of these, Italy's official name is as follows:;;;;;;;;), is a unitary parliamentary republic in South-Central Europe. To the north it borders France, Switzerland, Austria and...
, primarily on the island of Murano
Murano
Murano is a series of islands linked by bridges in the Venetian Lagoon, northern Italy. It lies about 1.5 km north of Venice and measures about across with a population of just over 5,000 . It is famous for its glass making, particularly lampworking...
. It is world-renowned for being colourful, elaborate, and skillfully made.

Many of the important characteristics of these objects had been developed by the thirteenth century. Toward the end of that century, the centre of the Venetian glass industry moved to Murano
Murano
Murano is a series of islands linked by bridges in the Venetian Lagoon, northern Italy. It lies about 1.5 km north of Venice and measures about across with a population of just over 5,000 . It is famous for its glass making, particularly lampworking...
.

Byzantine craftsmen played an important role in the development of Venetian glass, an art form for which the city is well-known. When Constantinople
Constantinople
Constantinople was the capital of the Roman, Eastern Roman, Byzantine, Latin, and Ottoman Empires. Throughout most of the Middle Ages, Constantinople was Europe's largest and wealthiest city.-Names:...
was sacked by the Fourth Crusade
Fourth Crusade
The Fourth Crusade was originally intended to conquer Muslim-controlled Jerusalem by means of an invasion through Egypt. Instead, in April 1204, the Crusaders of Western Europe invaded and conquered the Christian city of Constantinople, capital of the Eastern Roman Empire...
in 1204, some fleeing artisans came to Venice. This happened again when the Ottomans took Constantinople in 1453, supplying Venice with still more glassworkers. By the sixteenth century, Venetian artisans had gained even greater control over the colour and transparency of their glass, and had mastered a variety of decorative techniques.

Despite efforts to keep Venetian glassmaking techniques within Venice, they became known elsewhere, and Venetian-style glassware was produced in other Italian cities and other countries of Europe.

Some of the most important brands of glass in the world today, including Venini , Barovier & Toso
Barovier & Toso
Barovier & Toso is an Italian company that specializes in Venetian glass.The company is one of the oldest family businesses in the world, founded in 1295 as simply Barovier....
, Pauly
Pauly & C. - Compagnia Venezia Murano
Pauly & C. - Compagnia Venezia Murano is a Venetian company that produces glass art, most notably Roman murrine, mosaics and chandeliers.The company was formed in 1919 by a merger of Pauly & C and the Compagnia di Venezia e Murano...
and Seguso., are still produced in the historical glass factories on Murano. Barovier & Toso is considered to be one of the 100 oldest companies in continuous operation in the world, having been founded in 1295. 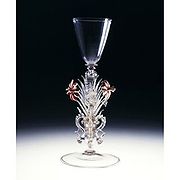 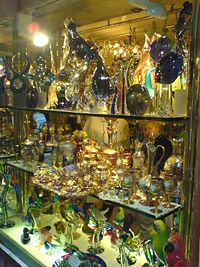 Murano’s reputation as a centre for glassmaking was born when the Venetian Republic, fearing fire and destruction to the city’s mostly wood buildings, ordered the destruction of all the foundries within the city in 1291. Though the Republic ordered the destruction of the foundries, it authorised and encouraged construction outside the city, and by the late 13th century, the glassmaking industry was centred in Murano. Murano glass is still interwoven with Venetian glass.

Murano's glassmakers were soon the island’s most prominent citizens. By the 14th century, glassmakers were allowed to wear swords, enjoyed immunity from prosecution by the Venetian state and found their daughters married into Venice’s most affluent families. Of course there was a catch: Glassmakers were not allowed to leave the Republic. Many craftsmen took this risk, however, and set up glass furnaces in surrounding cities and as far afield as England and the Netherlands.

Murano’s glassmakers held a monopoly on quality glassmaking for centuries, developing or refining many technologies including crystalline glass
Glass
Glass is an amorphous solid material. Glasses are typically brittle and optically transparent.The most familiar type of glass, used for centuries in windows and drinking vessels, is soda-lime glass, composed of about 75% silica plus Na2O, CaO, and several minor additives...
, enameled glass (smalto), glass with threads of gold (aventurine), multicoloured glass (millefiori
Millefiori
Millefiori is a glasswork technique which produces distinctive decorative patterns on glassware.The term millefiori is a combination of the Italian words "mille" and "fiori" . Apsley Pellatt was the first to use the term "millefiori", which appeared in the Oxford Dictionary in 1849...
), milk glass (lattimo), and imitation gemstones made of glass. Today, the artisans of Murano are still employing these centuries-old techniques, crafting everything from contemporary art glass and glass jewelry to Murano glass chandeliers and wine stoppers.

Today, Murano is home to the Museo Vetrario or Glass Museum in the Palazzo Giustinian, which holds displays on the history of glassmaking, as well as glass samples ranging from Egyptian times through the present day.


The Art of Glassmaking

The process of making Murano glass is rather complex. The glass is made from silica, which becomes liquid at high temperatures. As the glass passes from a liquid
Liquid
Liquid is one of the three classical states of matter . Like a gas, a liquid is able to flow and take the shape of a container. Some liquids resist compression, while others can be compressed. Unlike a gas, a liquid does not disperse to fill every space of a container, and maintains a fairly...
to a solid
Solid
Solid is one of the three classical states of matter . It is characterized by structural rigidity and resistance to changes of shape or volume. Unlike a liquid, a solid object does not flow to take on the shape of its container, nor does it expand to fill the entire volume available to it like a...
state, there is an interval when the glass is soft before it hardens completely. This is when the glass-master can shape the material. 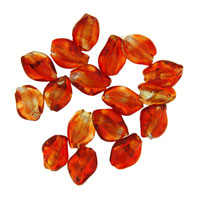 The other raw materials, called flux
Flux
In the various subfields of physics, there exist two common usages of the term flux, both with rigorous mathematical frameworks.* In the study of transport phenomena , flux is defined as flow per unit area, where flow is the movement of some quantity per time...
es or melting agents, allow the glass to soften at lower temperatures. The more sodium oxide
Sodium oxide
Sodium oxide is a chemical compound with the formula Na2O. It is used in ceramics and glasses, though not in a raw form. Treatment with water affords sodium hydroxide....
present in the glass, the slower it solidifies. This is important for hand-working because it allows the glassmaker more time to shape the material. The various raw materials an artisan might add to a glass mixture are sodium
Sodium
Sodium is a chemical element with the symbol Na and atomic number 11. It is a soft, silvery-white, highly reactive metal and is a member of the alkali metals; its only stable isotope is 23Na. It is an abundant element that exists in numerous minerals, most commonly as sodium chloride...
(to reduce melting temperature), nitrate
Nitrate
The nitrate ion is a polyatomic ion with the molecular formula NO and a molecular mass of 62.0049 g/mol. It is the conjugate base of nitric acid, consisting of one central nitrogen atom surrounded by three identically-bonded oxygen atoms in a trigonal planar arrangement. The nitrate ion carries a...
and arsenic
Arsenic
Arsenic is a chemical element with the symbol As, atomic number 33 and relative atomic mass 74.92. Arsenic occurs in many minerals, usually in conjunction with sulfur and metals, and also as a pure elemental crystal. It was first documented by Albertus Magnus in 1250.Arsenic is a metalloid...
(to eliminate bubbles) and colouring or opacifying substances.

Murano artisans use specialised tools in the making of their glass. Some of these tools include borselle (tongs or pliers used to hand-form the red-hot glass), canna da soffio (blowing pipe), pontello (an iron rod to which the craftsman attaches the glass after blowing to add final touches), scagno (the glass-master's work bench) and tagianti (large glass-cutting clippers).