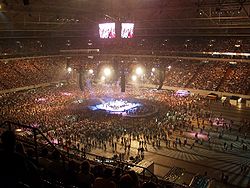 Veltins-Arena is a football stadium in Gelsenkirchen
Gelsenkirchen
Gelsenkirchen is a city in North Rhine-Westphalia, Germany. It is located in the northern part of the Ruhr area. Its population in 2006 was c. 267,000....
, North Rhine-Westphalia
North Rhine-Westphalia
North Rhine-Westphalia is the most populous state of Germany, with four of the country's ten largest cities. The state was formed in 1946 as a merger of the northern Rhineland and Westphalia, both formerly part of Prussia. Its capital is Düsseldorf. The state is currently run by a coalition of the...
, Germany
Germany
Germany , officially the Federal Republic of Germany , is a federal parliamentary republic in Europe. The country consists of 16 states while the capital and largest city is Berlin. Germany covers an area of 357,021 km2 and has a largely temperate seasonal climate...
. It opened in 2001, as the new home ground for German Bundesliga
Fußball-Bundesliga
The Fußball-Bundesliga is a professional association football league in Germany. At the top of Germany's football league system, it is the country's primary football competition. It is contested by 18 teams and operates on a system of promotion and relegation with the 2. Bundesliga...
club Schalke 04
FC Schalke 04
Fußball-Club Gelsenkirchen-Schalke 04, commonly known as simply FC Schalke 04 or Schalke , is a German, association-football club originally from the Schalke district of Gelsenkirchen, North Rhine-Westphalia. Schalke has long been one of the most popular football teams in Germany, even though major...
.

It hosted the 2004 UEFA Champions League final and 5 matches in the 2006 FIFA World Cup
2006 FIFA World Cup
The 2006 FIFA World Cup was the 18th FIFA World Cup, the quadrennial international football world championship tournament. It was held from 9 June to 9 July 2006 in Germany, which won the right to host the event in July 2000. Teams representing 198 national football associations from all six...
, including a quarter-final. It has a league capacity of 61,482 (standing and seated) and an international capacity of 53,951 (seated only). The stadium has a retractable roof and a retractable pitch. The naming rights to the stadium were sold on July 1, 2005 to the German brewery Veltins
Veltins
Brauerei C & A Veltins is a brewery in the west German city of Meschede-Grevenstein.Veltins ranks number 7 among Germany's best selling breweries....
.

Plans to construct a new stadium emerged in the late 1990s, as fans and managers sought to move out of the outdated Parkstadion
Parkstadion
Parkstadion was a multi-purpose stadium in Gelsenkirchen, North Rhine-Westphalia, Germany, that is no longer used to host any major events. The stadium was built in 1973 and hosted five matches of the 1974 FIFA World Cup...
, and create a thoroughly modern multifunctional arena. Following Schalke 04's historic 1997 victory in the UEFA Cup
UEFA Cup
The UEFA Europa League is an annual association football cup competition organised by UEFA since 1971 for eligible European football clubs. It is the second most prestigious European club football contest after the UEFA Champions League...
, and the club's upcoming 100th anniversary in 2004, the contract to construct a €186 million stadium was given in 1998 to the German construction firm HBM
HBM
HBM may refer to:* Annual Meeting of the Organization for Human Brain Mapping* His/Her Britannic Majesty* mu hemoglobin* Human body model* Hierarchical Bayes model...
.

The site chosen for Schalke 04's new stadium is in the direct vicinity of the old Parkstadion, on an extensive piece of club owned property known as the "Berger Feld". Unfortunately, two mine shafts of the "Consolidation" and "Hugo" coal-mines run directly beneath this field at a depth of 800 m. These shafts (in use until 2000) would have caused unwanted shifts and tensions that could have compromised the structural integrity of the stadium. To avoid this, the main axis was rotated from the classic North-South arrangement to a Northeast-Southwest alignment, making the arena parallel to the mines.

The Veltins-Arena was created as a multi-functional arena of two tiers that completely surround the playing field. These allow for a league capacity of 61,524 spectators (standing and seated) and an international capacity of 53,994. For league matches, the North stand is left as standing rows (capacity: 16,307) to accommodate the Schalke 04 fans, while for international matches, these are converted to seats (capacity: 8,600). The 72 VIP lounges form a ring around the entire stadium, separating the first tier from the second tier. On the main Western grandstand, the VIP capacity is increased by a second level of lounges directly beneath the main belt.

The foundation for the stadium was created out of cast concrete and 600,000 m3 of packed slag, a waste product from the local coal mines. These were packed into mounds to support the four main stands, which were made out of pre-fabricated, reinforced concrete sections. Leading into the four corners of the arena are 4.50 m x 4.50 m tunnels, which serve both as access for construction and assembly, and as ventilation for the interior.

The Veltins-Arena features a Teflon-coated fiberglass canvas retractable roof, which spans the entire stadium. The roof is supported by a rectangular truss that is suspended above the field, which is in turn connected to the main building via 24 steel pylons. The center of the roof can be opened into two halves, allowing for an opened or covered stadium, depending on weather and event. In order to reduce the exterior noise of up to 105 decibels during concerts, a second layer of Teflon-coated fiberglass canvas was added over the first, creating a dampening air cushion. Hanging 25 m over the center of the pitch are four video screens, each with a surface area of 35 m2. The centrally suspended scoreboard, similar to those found inside indoor sports areas, was the first of its kind in football stadia, and has since been copied in the Commerzbank-Arena
Commerzbank-Arena
The Commerzbank-Arena is a sports stadium in Frankfurt, Hesse, Germany. Commonly known by its original name, Waldstadion , the stadium opened in 1925. The stadium has been upgraded several times since then; the most recent remodelling was its redevelopment as a football-only stadium in preparation...
in Frankfurt and the Esprit Arena in Düsseldorf.

Like the Sapporo Dome
Sapporo Dome
The is a stadium located in Toyohira-ku, Sapporo, Japan, and is primarily used for baseball and football. It is the home field of the baseball team Hokkaido Nippon Ham Fighters and the football club Consadole Sapporo.-History:...
in Japan, the University of Phoenix Stadium
University of Phoenix Stadium
University of Phoenix Stadium, opened August 1, 2006, is a multipurpose football stadium located in Glendale, Arizona. It is the home of the Arizona Cardinals of the National Football League and the annual Fiesta Bowl...
in the U.S. state of Arizona and the Gelredome
Gelredome
The GelreDome is a football stadium in the city of Arnhem, in the Netherlands. It serves as the home of the football club Vitesse. It was opened on 25 March 1998, featuring a retractable roof, as well as a convertible pitch, that can be retracted, when unused during concerts or other events held at...
in the Nederlands before it, the Veltins-Arena features a slide out pitch. Supported by 11,400 t substructure, the playing field can be moved in and out of the stadium within 4 hours. This has several advantages:

In order to provide for over 60,000 spectators, the Veltins-Arena is equipped with an abundance of catering facilities. With 15 small restaurants, 50 grilling stations and 35 cafés, the stadium can serve up to 2,500 kg of sausages, 7,000 pretzels, and 1,000 m2 of pizza in one day. These catering areas are connected to a 5 km long beer-line, supplying them with roughly 52,000 litres of beer per matchday.

During the renovation of Rheinstadion in Düsseldorf
Düsseldorf
Düsseldorf is the capital city of the German state of North Rhine-Westphalia and centre of the Rhine-Ruhr metropolitan region.Düsseldorf is an important international business and financial centre and renowned for its fashion and trade fairs. Located centrally within the European Megalopolis, the...
, the Arena served as the temporary home of the Rhein Fire
Rhein Fire
The Rhein Fire was a professional American football team in NFL Europe, formerly the World League of American Football. Established in Germany in 1995, the franchise resurrected the name of the former Birmingham Fire team which was active during the 1991-1992 WLAF seasons.-History:The team was...
of NFL Europe
NFL Europe
NFL Europe was an American football league which operated in Europe from 1991 until 2007. Backed by the National Football League , the largest professional American football league in the United States, it was founded as the World League of American Football to serve as a type of spring league...
, an American football
American football
American football is a sport played between two teams of eleven with the objective of scoring points by advancing the ball into the opposing team's end zone. Known in the United States simply as football, it may also be referred to informally as gridiron football. The ball can be advanced by...
league. The true multi-functionality of the stadium was put to a test in May 2004 when the Veltins-Arena hosted a pop-concert, one Bundesliga
Fußball-Bundesliga
The Fußball-Bundesliga is a professional association football league in Germany. At the top of Germany's football league system, it is the country's primary football competition. It is contested by 18 teams and operates on a system of promotion and relegation with the 2. Bundesliga...
match and one NFL Europe game within 96 hours. Other venues were Biathlon competitions, stock car races and operas.

The following games were played at the stadium during the 2006 World Cup: 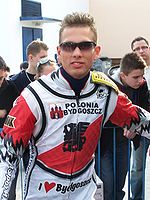 
Inspiration of other stadiums

Highly acclaimed, the Veltins-Arena served as a model for the University of Phoenix Stadium
University of Phoenix Stadium
University of Phoenix Stadium, opened August 1, 2006, is a multipurpose football stadium located in Glendale, Arizona. It is the home of the Arizona Cardinals of the National Football League and the annual Fiesta Bowl...
. This stadium shares features with its German counterpart such as a retractable roof and a slide-out pitch. The arena also has ties to Lucas Oil Stadium
Lucas Oil Stadium
Lucas Oil Stadium is a multi-purpose sports stadium in Downtown Indianapolis, Indiana. The stadium celebrated its grand opening on August 24, 2008, and its ribbon-cutting ceremony August 16, 2008. It replaced the RCA Dome as the home field of the NFL's Indianapolis Colts. The stadium was built to...
in Indianapolis
Indianapolis, Indiana
Indianapolis is the capital of the U.S. state of Indiana, and the county seat of Marion County, Indiana. As of the 2010 United States Census, the city's population is 839,489. It is by far Indiana's largest city and, as of the 2010 U.S...
in the U.S. state of Indiana
Indiana
Indiana is a US state, admitted to the United States as the 19th on December 11, 1816. It is located in the Midwestern United States and Great Lakes Region. With 6,483,802 residents, the state is ranked 15th in population and 16th in population density. Indiana is ranked 38th in land area and is...
. In that stadium, the retractable-roof also opens lengthwise from the center to the touchlines.