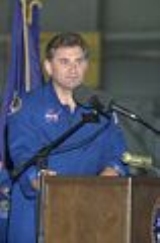 Encyclopedia
Vasily Vasiliyevich Tsibliyev ; born on February 20, 1954) is a Russian
Russia
Russia or , officially known as both Russia and the Russian Federation , is a country in northern Eurasia. It is a federal semi-presidential republic, comprising 83 federal subjects...
cosmonaut.

He was selected as a cosmonaut on March 26, 1987. Tsibliyev flew as Commander on Soyuz TM-17
Soyuz TM-17
Soyuz TM-17 was a Russian mission to the space station Mir, launched on July 1, 1993. It lasted 196 days and 17 hours, making more than 3,000 orbits of the planet Earth.-Crew:-Mission highlights:...
from July 1, 1993 to January 14, 1994 and on Soyuz TM-25
Soyuz TM-25
-Crew:-Mission highlights:This was the 30th expedition to Mir. An ESA astronaut from Germany was included on the mission.Soyuz TM-25 is a Russian spacecraft that was launched to carry astronauts and supplies to Mir station...
from February 2, 1997 to August 14 of the same year. He retired on June 19, 1998. Tsibliyev is currently Chief of the Yuri Gagarin Cosmonauts Training Center
Yuri Gagarin Cosmonauts Training Center
The Yu. A. Gagarin State Scientific Research-and-Testing Cosmonaut Training Center is a Russian training facility responsible for training cosmonauts for their space missions...
at Star City, Russia.

Tsibliyev is married with two children.

Tsibliyev was the commander in charge of Mir
Mir
Mir was a space station operated in low Earth orbit from 1986 to 2001, at first by the Soviet Union and then by Russia. Assembled in orbit from 1986 to 1996, Mir was the first modular space station and had a greater mass than that of any previous spacecraft, holding the record for the...
when it was hit by a Progress spacecraft in 1997.