As a result of the 1940 Moscow Peace Treaty that concluded the Winter War
Winter War
The Winter War was a military conflict between the Soviet Union and Finland. It began with a Soviet offensive on 30 November 1939 – three months after the start of World War II and the Soviet invasion of Poland – and ended on 13 March 1940 with the Moscow Peace Treaty...
, Finland
Finland
Finland , officially the Republic of Finland, is a Nordic country situated in the Fennoscandian region of Northern Europe. It is bordered by Sweden in the west, Norway in the north and Russia in the east, while Estonia lies to its south across the Gulf of Finland.Around 5.4 million people reside...
ceded the area of Finnish Karelia
Finnish Karelia
Karelia is a historical province of Finland. It refers to the Western Karelia that during the second millennium has been under western dominance, religiously and politically. Western, i.e. Finnish Karelia is separate from Eastern, i.e...
and other territories to the Soviet Union
Soviet Union
The Soviet Union , officially the Union of Soviet Socialist Republics , was a constitutionally socialist state that existed in Eurasia between 1922 and 1991....
. As a result, about 410,000 Finnish Karelians
Karelians
The Karelians are a Baltic-Finnic ethnic group living mostly in the Republic of Karelia and in other north-western parts of the Russian Federation. The historic homeland of Karelians includes also parts of present-day Eastern Finland and the formerly Finnish territory of Ladoga Karelia...
, or 12% of Finland's population, were relocated into the remainder of Finland.

The treaty did not require Finland to empty the ceded territory, but almost nobody was willing to stay, and almost 100% of the affected population chose to relocate, taking their belongings with them. Only the buildings and machinery were to be left behind intact as per the Peace Treaty, which for the most part also took place.

During the Continuation War
Continuation War
The Continuation War was the second of two wars fought between Finland and the Soviet Union during World War II.At the time of the war, the Finnish side used the name to make clear its perceived relationship to the preceding Winter War...
some 260,000 of the displaced population returned home. In June 1944, Finnish troops partially withdrew from the ceded areas again as a result of the Soviet Fourth strategic offensive
Fourth strategic offensive
The Vyborg–Petrozavodsk Offensive or Karelian offensive was a strategic operation by the Soviet Leningrad and Karelian Fronts against Finland on the Karelian Isthmus and East Karelia fronts of the Continuation War, on the Eastern Front of World War II. The Soviet forces captured East Karelia and...
. At the same time, the population was evacuated again. 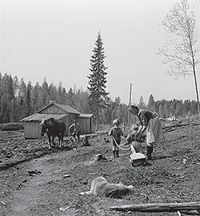 The Paris Peace Treaties of 1947
Paris Peace Treaties, 1947
The Paris Peace Conference resulted in the Paris Peace Treaties signed on February 10, 1947. The victorious wartime Allied powers negotiated the details of treaties with Italy, Romania, Hungary, Bulgaria, and Finland .The...
finally confirmed the Finnish loss of the territory. The evacuees were permanently settled in Finland. The government of Finland
Government of Finland
Finland is a republic with a representative democracy governed accordingly to the principles of parliamentarism. Legislative power is vested in the Parliament of Finland . Executive power is exercised by the Cabinet, officially termed Council of State , which is led by the Prime Minister, the Head...
subsidized the resettlement in two ways:

Since the 1990s some associations have been calling for returning Karelia back to Finland
Karelian question in Finnish politics
The Karelian question or Karelian issue is a dispute of Finnish politics over whether or not to try to regain sovereignty over the Finnish Karelia and other territories ceded to the Soviet Union in the Winter War and the Continuation War...
.