Encyclopedia
Uranquinty is a small town approximately 15 km south of Wagga Wagga
Wagga Wagga, New South Wales
Wagga Wagga is a city in New South Wales, Australia. Straddling the Murrumbidgee River, and with an urban population of 46,735 people, Wagga Wagga is the state's largest inland city, as well as an important agricultural, military, and transport hub of Australia...
in the Riverina
Riverina
The Riverina is an agricultural region of south-western New South Wales , Australia. The Riverina is distinguished from other Australian regions by the combination of flat plains, warm to hot climate and an ample supply of water for irrigation. This combination has allowed the Riverina to develop...
region of New South Wales
New South Wales
New South Wales is a state of :Australia, located in the east of the country. It is bordered by Queensland, Victoria and South Australia to the north, south and west respectively. To the east, the state is bordered by the Tasman Sea, which forms part of the Pacific Ocean. New South Wales...
, Australia
Australia
Australia , officially the Commonwealth of Australia, is a country in the Southern Hemisphere comprising the mainland of the Australian continent, the island of Tasmania, and numerous smaller islands in the Indian and Pacific Oceans. It is the world's sixth-largest country by total area...
. The population of the town is 715.

Uranquinty was used as the railway village when the railway line was being built from Wagga Wagga to Albury
Albury, New South Wales
Albury is a major regional city in New South Wales, Australia, located on the Hume Highway on the northern side of the Murray River. It is located wholly within the boundaries of the City of Albury Local Government Area...
.

Uranquinty has a distinguished record in relation to World War II
World War II
World War II, or the Second World War , was a global conflict lasting from 1939 to 1945, involving most of the world's nations—including all of the great powers—eventually forming two opposing military alliances: the Allies and the Axis...
. At the end of 1940 Uranquinty was chosen as the base for No. 5 Service Flying Training School RAAF
No. 5 Service Flying Training School RAAF
No. 5 Service Flying Training School was a Royal Australian Air Force flight training unit of World War II. Its role was to provide intermediate and advanced flight training to new pilots as part of Australia's contribution to the Empire Air Training Scheme...
(5SFTS) for intermediate and advanced training of Empire Air Trainees. The site chosen for 5 SFTS was especially suitable because it was on the main Sydney
Sydney
Sydney is the most populous city in Australia and the state capital of New South Wales. Sydney is located on Australia's south-east coast of the Tasman Sea. As of June 2010, the greater metropolitan area had an approximate population of 4.6 million people...
to Melbourne
Melbourne
Melbourne is the capital and most populous city in the state of Victoria, and the second most populous city in Australia. The Melbourne City Centre is the hub of the greater metropolitan area and the Census statistical division—of which "Melbourne" is the common name. As of June 2009, the greater...
railway line and comprised just over 1000 acres (4 km²) of land that was owned by the Lewington family. Possession of this land was taken under National Security (General) Regulation 54 which existed during the War years

Uranquinty RAAF Post Office was open from 16 December 1941 until 14 September 1946 dating the period of the operation of the facility with some accuracy. 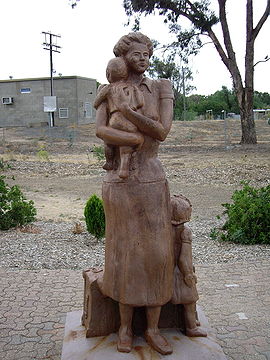 The Uranquinty Migrant Centre was established as a result of the Displaced Persons Immigration Scheme
Post war migrant arrivals, australia
In the immediate aftermath of World War II, Ben Chifley, Prime Minister of Australia from 1945 to 1949, established the Federal Department of Immigration and thereby launched a large scale immigration program...
that had been embarked upon by Prime Minister
Prime minister
A prime minister is the most senior minister of cabinet in the executive branch of government in a parliamentary system. In many systems, the prime minister selects and may dismiss other members of the cabinet, and allocates posts to members within the government. In most systems, the prime...
Chifley's
Ben Chifley
Joseph Benedict Chifley , Australian politician, was the 16th Prime Minister of Australia. He took over the Australian Labor Party leadership and Prime Ministership after the death of John Curtin in 1945, and went on to retain government at the 1946 election, before being defeated at the 1949...
government at the end of the Second World War as was a part of the Populate or Perish policy of the time.

Under Arthur Calwell
Arthur Calwell
Arthur Augustus Calwell Australian politician, was a member of the Australian House of Representatives for 32 years from 1940 to 1972, Immigration Minister in the government of Ben Chifley from 1945 to 1949 and Leader of the Australian Labor Party from 1960 to 1967.-Early life:Calwell was born in...
, Australia's first Minister for Immigration, displaced persons still in camps within Germany
Germany
Germany , officially the Federal Republic of Germany , is a federal parliamentary republic in Europe. The country consists of 16 states while the capital and largest city is Berlin. Germany covers an area of 357,021 km2 and has a largely temperate seasonal climate...
, Austria
Austria
Austria , officially the Republic of Austria , is a landlocked country of roughly 8.4 million people in Central Europe. It is bordered by the Czech Republic and Germany to the north, Slovakia and Hungary to the east, Slovenia and Italy to the south, and Switzerland and Liechtenstein to the...
and France
France
The French Republic , The French Republic , The French Republic , (commonly known as France , is a unitary semi-presidential republic in Western Europe with several overseas territories and islands located on other continents and in the Indian, Pacific, and Atlantic oceans. Metropolitan France...
were chosen to fill the need for a constant supply of labour to the country. Reception and training centres were established in now disused army and RAAF camps in rural and remote areas such as Uranquinty from 1948, particularly because by then married displaced persons with their families were being allowed entry into Australia. Places like Uranquinty had the space to provide accommodation for the wives and children. Many of these displaced persons worked on the relatively nearby Snowy Mountains Scheme
Snowy Mountains Scheme
The Snowy Mountains scheme is a hydroelectricity and irrigation complex in south-east Australia. It consists of sixteen major dams; seven power stations; a pumping station; and 225 kilometres of tunnels, pipelines and aqueducts and was constructed between 1949 and 1974. The Chief engineer was Sir...
.

A public memorial in the centre of Uranquinty, situated directly on the Olympic Highway, displays information boards and other memorials to the history of displaced persons who stayed in the area during these years.

Uranquinty Camp Post Office was open from 1 December 1948 until 31 March 1959 dating the period of the operation of the facility with some accuracy.

Uranquinty is located on the Sydney to Melbourne
Melbourne
Melbourne is the capital and most populous city in the state of Victoria, and the second most populous city in Australia. The Melbourne City Centre is the hub of the greater metropolitan area and the Census statistical division—of which "Melbourne" is the common name. As of June 2009, the greater...
railway line. The station
Uranquinty railway station, New South Wales
Uranquinty is a closed railway station on the Main South railway line in New South Wales, Australia. The station opened in 1880, initially as Sandy Creek. The station consisted of a single platform with a substantial weatherboard station building and signal box. The platform buildings were...
is still officially listed as "in use", but no passenger trains stop there, even by request.