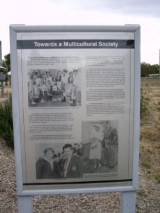 Encyclopedia
Ilsa Konrads was an Australia
Australia
Australia , officially the Commonwealth of Australia, is a country in the Southern Hemisphere comprising the mainland of the Australian continent, the island of Tasmania, and numerous smaller islands in the Indian and Pacific Oceans. It is the world's sixth-largest country by total area...
n freestyle
Freestyle swimming
Freestyle is an unregulated swimming style used in swimming competitions according to the rules of FINA. The front crawl stroke is almost universally used during a freestyle race, as this style is generally the fastest...
swimmer of the 1950s and 1960s, who won silver in the 4x100 m freestyle relay at the 1960 Summer Olympics
1960 Summer Olympics
The 1960 Summer Olympics, officially known as the Games of the XVII Olympiad, was an international multi-sport event held from August 25 to September 11, 1960 in Rome, Italy...
in Rome
Rome
Rome is the capital of Italy and the country's largest and most populated city and comune, with over 2.7 million residents in . The city is located in the central-western portion of the Italian Peninsula, on the Tiber River within the Lazio region of Italy.Rome's history spans two and a half...
. In her career, she set 12 individual world records, and after her swimming career ended, was the Australasia
Australasia
Australasia is a region of Oceania comprising Australia, New Zealand, the island of New Guinea, and neighbouring islands in the Pacific Ocean. The term was coined by Charles de Brosses in Histoire des navigations aux terres australes...
n editor of Belle
Belle (magazine)
Belle is an Australian design magazine, published bi-monthly, covering interior design and architecture as well as a raft of other home improvement content. It is Australia's leading design magazine and has been in circulation for over thirty years. It is produced by Australian Consolidated Press....
. Along with her brother John Konrads
John Konrads
John Konrads is an retired Australian freestyle swimmer of the 1950s and 1960s, who won the 1500 m freestyle at the 1960 Summer Olympics in Rome. In his career, he set 26 individual world records, and after his swimming career ended, was the Australasian director of L'Oréal, as well as campaigning...
, who also set multiple world records, and won gold in the 1500 m freestyle, they were known as the Konrad Kids. 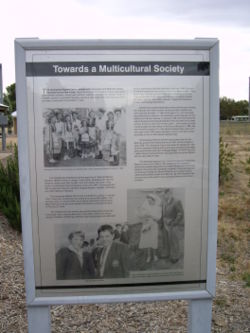 Born in Riga
Riga
Riga is the capital and largest city of Latvia. With 702,891 inhabitants Riga is the largest city of the Baltic states, one of the largest cities in Northern Europe and home to more than one third of Latvia's population. The city is an important seaport and a major industrial, commercial,...
, Latvia
Latvia
Latvia , officially the Republic of Latvia , is a country in the Baltic region of Northern Europe. It is bordered to the north by Estonia , to the south by Lithuania , to the east by the Russian Federation , to the southeast by Belarus and shares maritime borders to the west with Sweden...
, Konrads emigrated with her parents Janis and Elza, grandmother, elder sister Eve, and elder brother John in August 1944, initially to Germany. This came after Latvia's occupation by German troops during the Second World War and then re-occupation by Soviet troops. Living in Germany
Germany
Germany , officially the Federal Republic of Germany , is a federal parliamentary republic in Europe. The country consists of 16 states while the capital and largest city is Berlin. Germany covers an area of 357,021 km2 and has a largely temperate seasonal climate...
until 1949, their application to immigrate to the United States
United States
The United States of America is a federal constitutional republic comprising fifty states and a federal district...
was refused on account of the large size of the family. They were relocated to a camp at Uranquinty, which was previously a base for the Royal Australian Air Force
Royal Australian Air Force
The Royal Australian Air Force is the air force branch of the Australian Defence Force. The RAAF was formed in March 1921. It continues the traditions of the Australian Flying Corps , which was formed on 22 October 1912. The RAAF has taken part in many of the 20th century's major conflicts...
, in rural western New South Wales
New South Wales
New South Wales is a state of :Australia, located in the east of the country. It is bordered by Queensland, Victoria and South Australia to the north, south and west respectively. To the east, the state is bordered by the Tasman Sea, which forms part of the Pacific Ocean. New South Wales...
. There her father Janis taught the children to swim, fearing that they could drown in the many watering holes and dams in the camp.

Janis secured a job in Sydney
Sydney
Sydney is the most populous city in Australia and the state capital of New South Wales. Sydney is located on Australia's south-east coast of the Tasman Sea. As of June 2010, the greater metropolitan area had an approximate population of 4.6 million people...
as a dentist
Dentist
A dentist, also known as a 'dental surgeon', is a doctor that specializes in the diagnosis, prevention, and treatment of diseases and conditions of the oral cavity. The dentist's supporting team aides in providing oral health services...
, and the family settled first in Pennant Hills
Pennant Hills, New South Wales
Pennant Hills is a suburb of Sydney, New South Wales, Australia. Pennant Hills is located 25 kilometres north-west of the Sydney central business district in the local government area of Hornsby Shire...
and then Bankstown
Bankstown, New South Wales
Bankstown is a suburb of south-western Sydney, in the state of New South Wales, Australia. Bankstown is located 20 kilometres south-west of the Sydney central business district and is the administrative centre of the local government area of the City of Bankstown.-History:Prior to European...
. Elza enrolled in the University of Sydney
University of Sydney
The University of Sydney is a public university located in Sydney, New South Wales. The main campus spreads across the suburbs of Camperdown and Darlington on the southwestern outskirts of the Sydney CBD. Founded in 1850, it is the oldest university in Australia and Oceania...
's dentistry program, as her qualification from the University of Riga was not recognized, but withdrew due to the demands of raising three children. Ilsa and her siblings attended Revesby Primary School, where one of the schoolteachers was Don Talbot
Don Talbot
Don Talbot OBE is an Olympic swimming coach from Australia. He has coached national teams for Canada and Australia.-Canada:Since the 1950s Talbot has coached Olympic champions and World Record holders for a thirty year period...
. Talbot was an assistant to Frank Guthrie
Frank Guthrie
Frank Edward Huntingdon Guthrie was an England born South African international rugby union half-back. Although born in Notting Hill, London, Guthrie was educated at Diocesan College in Cape Town, where he also played provincial rugby for Western Province...
at the Bankstown Swimming Pool.

Every day, Ilsa and her elder brother John cycled to the Bankstown pool before sunrise, for a two-hour training session, before returning home for breakfast and then attending school. After school, they would cycle back to the pool and repeat the training regimen. In 1958, the results of Talbot's regime training began to materialize, when at the age of 13, she broke the 800 m and 880yd freestyle world records at the New South Wales
New South Wales
New South Wales is a state of :Australia, located in the east of the country. It is bordered by Queensland, Victoria and South Australia to the north, south and west respectively. To the east, the state is bordered by the Tasman Sea, which forms part of the Pacific Ocean. New South Wales...
championships, and then defeated Lorraine Crapp
Lorraine Crapp
Lorraine Crapp is a former Olympic swimming champion representing Australia. She competed in two Olympic Games — the 1956 Summer Olympics and the 1960 Summer Olympics. She won two Olympic gold medals in 1956...
to become the first woman to complete 440yd under five minutes. She then defeated Crapp and Dawn Fraser
Dawn Fraser
Dawn Fraser AO, MBE is an Australian champion swimmer. She is one of only two swimmers to win the same Olympic event three times – in her case the 100 meters freestyle....
at the 1958 British Empire and Commonwealth Games
1958 British Empire and Commonwealth Games
The 1958 British Empire and Commonwealth Games were held in Cardiff, capital of Wales from 18–26 July 1958.Thirty-five nations sent a total of 1,130 athletes and 228 officials to the Cardiff Games and 23 countries and dependencies won medals, including, for the first time, Singapore, Ghana, Kenya...
in Cardiff
Cardiff
Cardiff is the capital, largest city and most populous county of Wales and the 10th largest city in the United Kingdom. The city is Wales' chief commercial centre, the base for most national cultural and sporting institutions, the Welsh national media, and the seat of the National Assembly for...
to win the 440yd freestyle event. In the two years preceding the 1960 Summer Olympics
1960 Summer Olympics
The 1960 Summer Olympics, officially known as the Games of the XVII Olympiad, was an international multi-sport event held from August 25 to September 11, 1960 in Rome, Italy...
, she set world records in the 440yd, 400 m, 1500 m and 1650yd events.

At the Olympics, she suffered from nerves and was eliminated in the heats of the 100 m freestyle, and managed fourth in the 400 m freestyle, some 12s slower than her personal best. She collected a silver in the 4x100 m freestyle relay, along with Fraser, Crapp and Alva Colquhuon
Alva Colquhuon
Alva Colquhuon is a former Australian freestyle and butterfly swimmer of the 1950s, who won a silver medal in the 4 × 100 m freestyle relay at the 1960 Rome Olympics...
. Her last competition was at the 1962 British Empire and Commonwealth Games
1962 British Empire and Commonwealth Games
The 1962 British Empire and Commonwealth Games were held in Perth, Western Australia, Australia from 22 November-1 December 1962. Athletic events were held at Perry Lakes Stadium in the suburb of Floreat and swimming events at Beatty Park in North Perth....
in Perth
Perth, Western Australia
Perth is the capital and largest city of the Australian state of Western Australia and the fourth most populous city in Australia. The Perth metropolitan area has an estimated population of almost 1,700,000....
, where she claimed silver in the 440yd. event.

After her retirement from competitive swimming, Konrads went into journalism, and eventually became the editor of Belle
Belle
Belle is the feminine form of the French word which means beautiful.It may also refer to:-Business:* Belle Baby Carriers, a U.S. baby carrier manufacturer* Belle International, a Chinese footwear retailer-Computers and software:...
, 1975–1979, a leading Australian interior design magazine, and Vogue Living, 1979–1984 and 1992-1999. Konrads also worked for the Sydney Morning Herald
The Sydney Morning Herald
The Sydney Morning Herald is a daily broadsheet newspaper published by Fairfax Media in Sydney, Australia. Founded in 1831 as the Sydney Herald, the SMH is the oldest continuously published newspaper in Australia. The newspaper is published six days a week. The newspaper's Sunday counterpart, The...
newspaper and since 1999 has been running her own business.
The source of this article is wikipedia, the free encyclopedia.  The text of this article is licensed under the GFDL.