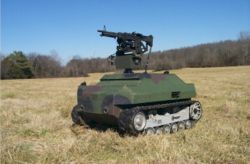 An unmanned ground vehicle (UGV) is a military robot
Military robot
Military robots are autonomous robots or remote-controlled devices designed for military applications.Such systems are currently being researched by a number of militaries.-History:...
used to augment the soldiers capability. This type of robot is generally capable of operating outdoors and over a wide variety of terrain
Terrain
Terrain, or land relief, is the vertical and horizontal dimension of land surface. When relief is described underwater, the term bathymetry is used...
, functioning in place of humans.

UGVs have counterparts in aerial warfare
Aerial warfare
Aerial warfare is the use of military aircraft and other flying machines in warfare, including military airlift of cargo to further the national interests as was demonstrated in the Berlin Airlift...
(unmanned aerial vehicle
Unmanned aerial vehicle
An unmanned aerial vehicle , also known as a unmanned aircraft system , remotely piloted aircraft or unmanned aircraft, is a machine which functions either by the remote control of a navigator or pilot or autonomously, that is, as a self-directing entity...
) and naval warfare
Naval warfare
Naval warfare is combat in and on seas, oceans, or any other major bodies of water such as large lakes and wide rivers.-History:Mankind has fought battles on the sea for more than 3,000 years. Land warfare would seem, initially, to be irrelevant and entirely removed from warfare on the open ocean,...
(remotely operated underwater vehicles). Unmanned robotics are actively being developed for both civilian and military use to perform dull, dirty, and dangerous activities. Some UGVs are employed in the current War in Iraq.

There are two general classes of unmanned ground vehicles: teleoperated and autonomous.

A teleoperated UGV is a vehicle that is controlled by a human operator at a remote location via a communications link. All cognitive processes are provided by the operator based upon sensory feedback from either line-of-sight visual observation or remote sensory input such as video cameras. A basic example of the principles of teleoperation would be a toy remote control car. Each of the vehicles are unmanned and controlled at a distance via a wired or wireless connection while the user provides all control based upon observed performance of the vehicle.

There are a wide variety of teleoperated UGVs in use today. Predominantly these vehicle are used to replace humans in hazardous situations. Examples are explosives and bomb disabling vehicles.

Some examples of teleoperated UGV technology are:

A fully autonomous robot in the real world has the ability to:


A robot may also be able to learn autonomously. Autonomous learning includes the ability to:

Autonomous robots still require regular maintenance, as with all machines.

Some examples of autonomous UGV technology are: