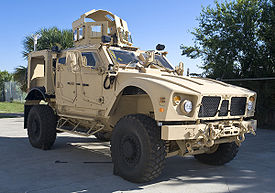 A combat vehicle, also known as a ground combat vehicle, is a self-propelled, weaponized military vehicle
Military vehicle
A military vehicle is a vehicle that includes all land combat and transportation vehicles, which are designed for or are in significant use by military forces throughout the world. Vehicles that are armored or intended for combat are often referred to as armoured fighting vehicles....
used for combat operations. Combat vehicles can be wheel
Wheel
A wheel is a device that allows heavy objects to be moved easily through rotating on an axle through its center, facilitating movement or transportation while supporting a load, or performing labor in machines. Common examples found in transport applications. A wheel, together with an axle,...
ed or tracked.

The automation of human tasks endeavors to reduce the required crew size with improvements in robotics. Enhancements to automation can help achieve operational effectiveness with a smaller, more economical, combat vehicle force.
The automation of combat vehicles has proved to be difficult due to the time latency between the operator controlling the vehicle and the signal being received. Unlike air forces, ground forces must navigate the terrain and plan around obstacles. The rapid tactical implications of operating a weaponized vehicle in a combat environment are great.

Appliqué armor can be quickly applied to vehicles and has been utilized on the U.S. Army's M8 Armored Gun System.

Fire suppression
Contemporary combat vehicles may incorporate a fire-suppression system to mitigate damage from fire. Systems can be employed in the engine and crew compartments and portable systems may be mounted inside and outside the vehicle as well.

Automatic fire-suppression systems activate instantaneously upon the detection of fire and have been shown to significantly improve crew survivability. Halon
Halon
Halon can refer to:* Haloalkane, or halogenoalkane, a group of chemical compounds consisting of alkanes with linked halogens. In particular, bromine-containing haloalkanes.* Halomethane fire extinguishing systems...
fire suppression systems quickly inundate an affected fire breach with a flood of halon to extinguish leaking fuel. Halon remains necessary for crew compartment fire suppression due to space and weight constraints, and toxicity concerns. Nitrogen systems take up about twice as much space as a comparable halon unit. Germany uses this system as a replacement for its halon system. Some systems, such as Germany's previous extinguisher, have a second shot of suppressant to mitigate re-ignition or the effects of a second hit.

Though not as instantaneous, portable crew-operable extinguishers are also used inside and outside the vehicle. Typically, portable extinguishers use a CO2 agent instead of the halon agents used in the past. CO2 can become lethal to vehicle occupants if it accumulates into a deadly concentration. The U.S. Army has adopted a replacement formula consisting of 50% water
Water
Water is a chemical substance with the chemical formula H2O. A water molecule contains one oxygen and two hydrogen atoms connected by covalent bonds. Water is a liquid at ambient conditions, but it often co-exists on Earth with its solid state, ice, and gaseous state . Water also exists in a...
, 50% potassium acetate
Potassium acetate
Potassium acetate is the potassium salt of acetic acid.-Preparation:It can be prepared by reacting a potassium-containing base such as potassium hydroxide or potassium carbonate with acetic acid:...
. Alternatives such as powder formulas also exist.

Silent watch is a role that requires that all mission requirements be met while keeping acoustic and infrared signature levels to a minimum. For this reason, silent watch often requires the vehicle to operate without use of the main engine and sometimes even auxiliary engines. Many modern combat vehicles often have electronic equipment that cannot be supported solely with auxiliary batteries alone. Auxiliary fuel cells are a potential solution for covert operations.

Force trackers are still not as prevalent as in the air force
Air force
An air force, also known in some countries as an air army, is in the broadest sense, the national military organization that primarily conducts aerial warfare. More specifically, it is the branch of a nation's armed services that is responsible for aerial warfare as distinct from an army, navy or...
but still is an essential component of combat vehicles.

In the mid-'90s, U.S. weapon developers envisioned a sophisticated communication network where positions of enemy and friendly forces could be relayed to command vehicles and other friendly vehicles. Friendly vehicles could transmit enemy positions to friendly combat vehicles in combat range for efficient annihilation of the enemy. Logistics support could also monitor front-line combat vehicle fuel and ammunition statuses and move in to resupply depleted vehicles.

Combat vehicles weapons are primarily designed for engaging other vehicles at long distances and are not optimized for destroying non-traditional targets like car bomb
Car bomb
A car bomb, or truck bomb also known as a Vehicle Borne Improvised Explosive Device , is an improvised explosive device placed in a car or other vehicle and then detonated. It is commonly used as a weapon of assassination, terrorism, or guerrilla warfare, to kill the occupants of the vehicle,...
s.
The source of this article is wikipedia, the free encyclopedia.  The text of this article is licensed under the GFDL.