Encyclopedia
The University of Porto is a Portuguese
Portugal
Portugal , officially the Portuguese Republic is a country situated in southwestern Europe on the Iberian Peninsula. Portugal is the westernmost country of Europe, and is bordered by the Atlantic Ocean to the West and South and by Spain to the North and East. The Atlantic archipelagos of the...
public university
Public university
A public university is a university that is predominantly funded by public means through a national or subnational government, as opposed to private universities. A national university may or may not be considered a public university, depending on regions...
located in Porto
Porto
Porto , also known as Oporto in English, is the second largest city in Portugal and one of the major urban areas in the Iberian Peninsula. Its administrative limits include a population of 237,559 inhabitants distributed within 15 civil parishes...
, and founded 22 March 1911. It is the largest Portuguese university by number of enrolled students and has one of the most noted research outputs in Portugal. It was considered one of the 100 best Universities of Europe, in 2010.

The university
University
A university is an institution of higher education and research, which grants academic degrees in a variety of subjects. A university is an organisation that provides both undergraduate education and postgraduate education...
results, essentially, from two higher education institutions created during the 19th century in Porto: the Politechnical Academy (Academia Politécnica) and the Medical-Surgical School (Escola Médico-Cirúrgica). After the 1910 revolution in Portugal
Portugal
Portugal , officially the Portuguese Republic is a country situated in southwestern Europe on the Iberian Peninsula. Portugal is the westernmost country of Europe, and is bordered by the Atlantic Ocean to the West and South and by Spain to the North and East. The Atlantic archipelagos of the...
, starting the First Republic, the Universities of Lisbon and Porto
Porto
Porto , also known as Oporto in English, is the second largest city in Portugal and one of the major urban areas in the Iberian Peninsula. Its administrative limits include a population of 237,559 inhabitants distributed within 15 civil parishes...
were created. Initially, the University of Porto was composed of three faculties:


The inauguration of the University of Porto was on July 16, 1911, and as first Reitor (rector
Rector
The word rector has a number of different meanings; it is widely used to refer to an academic, religious or political administrator...
), the mathematician Gomes Teixeira was chosen. At this time, the university became economically and scientifically independent, and teaching autonomy was officially recognised. Currently, there are 14 faculties and a postgraduate business school at the university. 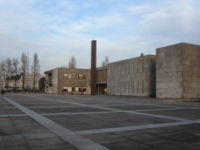 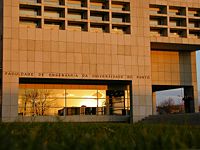 Today, about 28,000 students (11,000 postgraduate) attend the courses provided by the U.Porto's fifteen schools (13 faculties, a biomedical sciences institute and a business school, each one with a considerable degree of autonomy).


Globally, the U. Porto offers 63 graduate degree courses, over 160 master courses, and several doctoral degree courses and other specialization courses, supported by 2300 lecturers and a technical and administrative staff of over 1600 people.

In 2007, a Higher Education Evaluation & Accreditation Council of Taiwan's ranking, placed the University of Porto in 459. It was the only Portuguese university in the top 500 according to the Taiwanese ranking. 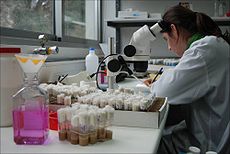 R&D activities at the University of Porto have significantly expanded over the last years, mainly as a result of academic qualification and increased funding of R&D facilities and research grants through competitive programs with external independent evaluation by international peer review committees.
Although R&D centers vary noticeably in dimension, aims and structure — from small units to large centers, conducting specialized or interdisciplinary work, faculty integrated or independent — they are present in almost every field of knowledge showing a shared vision towards a modern research university. Many of these centers are interface institutions whose aim is the development of links of cooperation between the University and external entities such as enterprises or governmental organizations. Among the most recognized research centers of the university are the IBMC - Instituto de Biologia Molecular e Celular
Instituto de Biologia Molecular e Celular
The Institute of Molecular and Cell Biology in Porto, Portugal, was founded in the 1990s as a multidisciplinary research institution in the fields of genetic diseases, infectious diseases and immunology, neuroscience, stress and structural biology.Most of its investigators are University of...
(Institute of Molecular and Cell Biology), IPATIMUP - Instituto de Patologia e Imunologia Molecular da Universidade do Porto (Institute of Molecular Pathology and Immunology of the University of Porto) and INESC-Porto - Instituto de Engenharia de Sistemas e Computadores (Research Institute of Computer Systems). 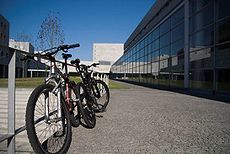 The University buildings — faculties, R&D centres, student residences and sport facilities — are grouped in three main sites (called ‘poles’). In the city centre — where the neoclassical
Neoclassical architecture
Neoclassical architecture was an architectural style produced by the neoclassical movement that began in the mid-18th century, manifested both in its details as a reaction against the Rococo style of naturalistic ornament, and in its architectural formulas as an outgrowth of some classicizing...
building of architect Carlos Amarante
Carlos Amarante
Carlos Luís Ferreira da Cruz Amarante was an important Portuguese engineer and architect.Amarante's father was musician in the court of the Bishop of Braga. He began pursuing an ecclesiastical career, but left the seminary when he was 23 years old to marry Luísa Clara Xavier...
marks the birthplace of the University — lies Pole 1; Pole 2 (Asprela) is a campus in the northern end of Porto; Pole 3 (Campo Alegre) is located in the western part of the city, over the river Douro bank, not far from Pole 1. A number of other institutes and centers are scattered all over the city and even beyond its limits.

The development of strong links with the community is one of the University's main concerns. This lies behind the constitution of the Foundation Science and Development, an institution which associates University and municipality and is responsible for the management of two important cultural facilities located in Pole 3: the Porto Planetarium and the Campo Alegre Theatre. Another evidence of this concern is the priority given to Continuing Education, with the development of multidisciplinary courses, the establishment of cooperation protocols, the training of teachers, the foundation of the Association of Portuguese Universities for Continuing Education and the providing of on-line courses. 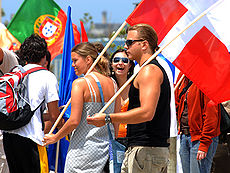 The University of Porto is deeply committed to the development of its international relations, taking part in several university networks and cooperation groups — not only within Europe but also extending to the southern hemisphere countries of Portuguese language. The increasing numbers of students taking part in mobility programs, the exchange of lecturers and researchers, the participation in international R&D projects and the involvement in cooperative projects with Brazil and several African countries are a reflection of the importance the University gives to its international orientation. This is why, every year, a growing number of students and scientists from all over the world choose the University of Porto as their preferred teaching and research institution. Just last year (2007), around 2.000 foreign students completed their higher education in the University of Porto.

Finally, one should mention the active role the University has played in international actions concerning the assessment and funding of higher education institutions, both fundamental to the development of Portuguese models in these areas. 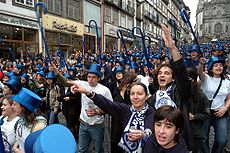